If searching for snow on a mid-December day in the Finger Lakes sounds a bit foolish you’d be right. Especially given what’s headed our way today (Thursday). But at the start of this week, it was still missing from the winter landscape and, much to my surprise, I found myself craving fresh, sparkling snow.

I heard rumors of an overnight dusting so my expectations were high as I headed out the door Monday to Ithaca. I was driving there in response to my daughter’s exasperation with her older puppy (it has a couch eating disorder). At Taughannock Falls, I found a wet but thick dusting that gave me hope. In Ithaca, nothing. But just southeast of Ithaca, a squall squatted over the hills for much of the day. Clearly this was an altitude snow so now I knew where to look when we returned tomorrow.

Although the snow at T-Falls was miniscule and the day dreary, the solitude was glorious. I was the only one at the popular visitor center overlook–for a while.

Kneeling down and holding the camera on the thick wood rail to steady it for a 1/3-second obligatory, water-blurring exposure, I was about to press the shutter button when several clacking sounds (hooves?) rapidly approached me from behind. I tried to concentrate on the composition but soon the clacking was upon me, now mixed with voices.

A dozen or so enthusiastic but colorful middle-aged hikers wielding hiking poles besieged me. It was clear they wanted a group selfie (minus me) with the falls behind them. 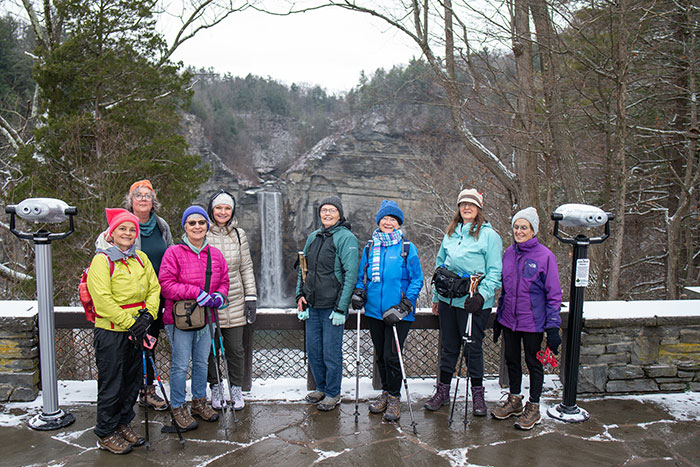 They all belonged to the Campus Club at Cornell, a women’s club founded in 1900. They were almost halfway through their rim trail hike. Outnumbered and outflanked by their enthusiasm and vigor, I yielded and volunteered to take their group picture with one of their phones. Soon we both went about our respective tasks; a hike up the gorge trail restored me to solitude.

The following morning, I packed up the couch-muncher and headed to Muddy Fingers Farm (a CSA farm in Hector), where the pup’s sister lived so they could romp the fields for an hour to exhaust each other.

It was a gloriously clear day, and I chose a route to the farm that took me through the Finger Lakes National Forest. There’s high ground there. As I gained altitude the snow gradually increased to a few inches and remained glued to the trees despite the brilliant sun. When I reached Potomac Road, altitude 1750 feet, I found the road surrounded by trees cloaked in snow: here was the snowy, picturesque scene I envisioned. 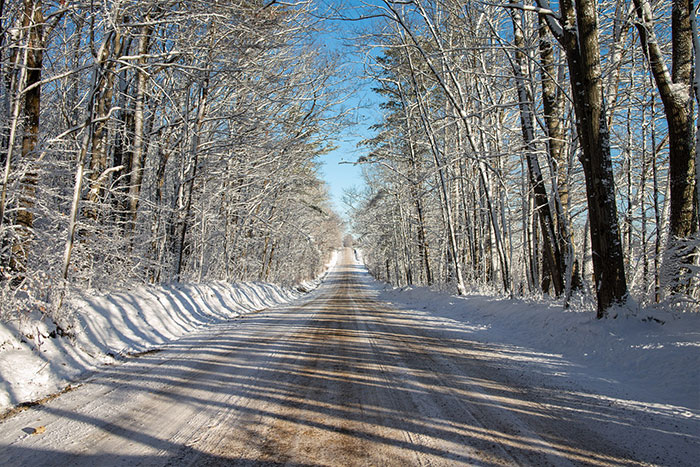 At the farm, Alice and her sister Bella (whippet like mutts) tore across the fields knocking into and tumbling over each other with ferocious fake bites. They especially loved zigzagging and weaving through the forest of two-foot kale stocks, looking like downhill slalom skiers.

Curled up on the front seat, paws occasionally twitching, Alice slept soundly on the final leg of her trip north.