May 17, 1981, was an important day for artists and art lovers in Auburn: It was the day the Schweinfurth Art Center opened.

To commemorate that day and celebrate our 40th anniversary, the Art Center is opening its doors for free on Sunday, May 16, 2021. The public is invited to tour Member Show 2021 as well as a selection of architectural drawings and sketches by Julius A. Schweinfurth, the Auburn native for whom the Schweinfurth was named.

“Julius Schweinfurth believed in the importance of artists, and the arts for the wellbeing of individuals and communities. His vision for an Art Center for Auburn was realized through his generous gift and the efforts of many people who worked to make it happen,” said Donna Lamb, who has been executive director of the Schweinfurth since 2000. “The Schweinfurth is a true art center, a place to both see and make art ‘in any form,’ as Julius Schweinfurth said.”

One of four sons

Julius Adolphe Schweinfurth was born Sept. 20, 1858, one of four sons of Charles J. and Katherine Ammon Schweinfurth. Charles was a successful carver, gilder, and pattern maker who emigrated from Germany in 1852, and all of his sons inherited their father’s interest in art and architecture. The couple also had a daughter, Jennie P. Hartopp, who was an artist and lived in London, England.

Julius grew up at 3 Hamilton Ave., but little is known of his childhood. He graduated from Auburn Academic High School in 1877 and began working at Boston’s Peabody and Stearns architectural firm in 1879. At the time, most architects were hired as junior draftsmen and trained by experienced architects at the firm.

Four years later, in 1883, Julius left the company to create an independent architectural firm with his brother, Charles, in Cleveland. In 1885, Julius Schweinfurth spent nine months traveling to France, Spain, Italy, and England to study Greek, Roman, and Italianate architecture, before returning to work at Peabody and Stearns. He published a book, “Sketches Abroad,” filled with his drawings and architectural renderings in 1888.

Schweinfurth had a successful career as an architect. Among the buildings he designed were the Burnham Athenaeum in Champagne, IL, in 1895, which served as the city’s public library for many years; twin townhouses in Boston’s Back Bay in 1904; and several buildings on the Wellesley College campus in western Massachusetts. In Auburn, he designed Bradley Memorial Chapel in Auburn’s Fort Hill Cemetery (1889), one of his first solo commissions; the James Street School in 1895 (closed in 1953); and the home of then-Mayor Thomas Mott Osborne in 1906. He also designed the Memorial Chapel at George Jr. Republic in Freeville, NY.

Trust for an art center

However, Schweinfurth’s biggest impact on Auburn came after his death on Sept. 29, 1931. In his will, he set up a trust that, after the death of his son in 1970, would be used to establish a building in Auburn for the benefit of the public as a place to exhibit and study fine arts and architecture with “particular attention to be paid to those exhibiting a special talent for art in any form and who intend to follow it as a lifework.”

Ground was broken on Nov. 29, 1978, and the structure was completed in 1980. The art center opened with its first exhibits on May 17, 1981. Over the years, improvements have been made to maintain and upgrade the building, including a new roof in 2009, a new ceramic studio and sewing studio in 2015, the second floor Davis Family Gallery in 2015, new flooring in 2018, and a new HVAC system in 2020. Future plans include a new entry addition and development of a West End Arts Campus with the Cayuga Museum.

Two of the Schweinfurth’s longest running exhibits began early in the art center’s history. “Quilts=Art=Quilts,” an annual juried exhibit of art quilts that draws entries from around the world, was first held in 1982. And “Both Ends of the Rainbow”, an annual exhibition of student and senior citizen art, began in 1983. 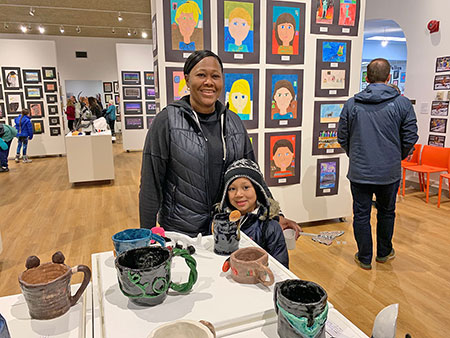 Over the years, the Schweinfurth has become known internationally for its fiber arts programs. In 2003, the art center bought and began running Quilting by the Lake, an annual art quilt conference. That, coupled with the growing reputation of the Quilts=Art=Quilts exhibit and workshops with acclaimed artists has brought national and international attention to the Schweinfurth Art Center.

The art center usually offers more than a dozen exhibits involving more than 600 artists and about 15,000 visitors per year, discounting the impact of the COVID-19 pandemic. In addition to exhibits, the Schweinfurth offers a variety of other programs including folk arts, poetry, music, First Fridays, and other special events along with classes and workshops for youth and adults in our pottery, sewing, surface design, and multi-purpose studio classrooms.

Throughout its 40-year history, the mission of the Schweinfurth has remained the same: to encourage the work of emerging artists and promote public participation in and appreciation of the arts through exhibitions, educational programs, and other special events designed to reach a diverse audience.

For more information, link to schweinfurthartcenter.org.