Between the two world wars, 16 men served as Commander-in-Chief of the entire United States fleet (CINCUS). The only one from the state of New York was Frank H. Schofield, a native of Yates County.

Schofield was born outside Penn Yan in 1869, the oldest son of a cash-strapped tenant farmer. An outstanding student in the county’s rural schools and Penn Yan Academy, he knew that he didn’t want to be a farmer. He watched his father work hard for basically a subsistence living. Frank Schofield wanted more out of life but he knew that the only way he could get higher education was an appointment to a military academy. Forced to leave Penn Yan Academy in the winter of 1885-1886 because his family could not afford the tuition, on the advice of his principal he took the qualifying exam for West Point. He received the highest score in the state of New York that year, but was told that he could not get a West Point appointment as he was only sixteen. He was advised to wait a year and try again, but Schofield was not the type to wait. He went to Annapolis and took the exam for the Naval Academy. With one of the highest scores in the country, he received his congressional appointment in the spring of 1886 and began his 46-year naval career.

What a career it was! As a young Ensign, he performed heroically in the Spanish-American War, coming under enemy fire for the only time in his career. In the years before the United States entered the First World War, as a Lieutenant Commander he lectured at the Navy War College in Rhode Island on ordnance and strategy. Once the war broke out in Europe in 1914, he commanded a four-ship squadron that provided relief for Armenians and Jews that were victims of Turkish atrocities in the eastern Mediterranean.

In 1916, he was ordered to the Chief of Naval Operations in Washington DC and put in charge of a team to develop tactics to be used against German U-Boats in the north Atlantic. A Captain once the United States entered the war in 1917, he was ordered to London by the Chief of Naval Operations in European Waters to continue his work. While there, he participated in war-gaming and became an expert on the German fleet. As such, when the war was over, he was one of three Navy officers to advise President Wilson in drawing up the terms of the Treaty of Versailles at the Paris Peace Conference of 1919.

While involved in the negotiations at Versailles Palace, Schofield became suspicious of Japanese ambitions when they demanded former German possessions in China and the Pacific in exchange for ratifying the treat. The United States also had possessions in the Pacific as a result of the Spanish-American War of 1898 – the Philippines, Guam, Midway, Hawaii, etc. and he could foresee the possibility of a future clash between the two nations.

In 1921-22 he was a naval advisor to the Washington Naval Disarmament Conference and became an outspoken opponent of the agreement, believing that Japan had no intention of adhering to it. Bucking the isolationist mood of the time, he spoke against the treaty, wrote against it, and testified before the Senate.

As a Rear Admiral in the mid-1920s, he was the head of the War Plans Division in Washington and used his time there to further develop War Plan Orange, the strategy to be used in case of war against Japan in the Pacific. In the last year of his career, as a full four-star Admiral, he oversaw “fleet problems” (mock attacks) to test the defenses of the main naval base in San Diego, the Panama Canal, and most notably, the Hawaiian Islands.

As a part of what was called Grand Joint Exercise Four in 1932, 150 airplanes were launched from two of our new aircraft carriers, the Lexington and the Saratoga, and carried out mock attacks against airplanes parked at Wheeler Field and naval vessels moored in Pearl Harbor. While Admiral Schofield stood on the deck of his flagship he watched our bombers dropping sacks of flour on nearby ships. The Army and Navy were caught totally by surprise. Based on that experience, Schofield predicted that the next war would start with a surprise enemy air attack against our fleet wherever it was located at the time, followed by destruction of shore facilities (oil storage tanks, dry docks) in Hawaii, also from the air.

More than nine years later, on December 7, 1941 Admiral Schofield was on his deathbed in the Navy Hospital in Bethesda, Maryland from complications of Parkinson’s disease. Based on medical records, he was cognizant enough to know that his prediction had come true. He died in February of 1942 and was buried at Arlington National Cemetery with full military honors.

I stumbled across Admiral Schofield quite by accident. Boxes of Schofield family letters were donated to the Yates County History Center in the summer of 2005. After Googling Frank Schofield and seeing the things he had done in his career, and finding out that he had no biography or memoir written, I decided to take on those letters for a project. There were nearly 7,000 letters in those boxes, written by Frank and other members of his family between the 1880s and the 1930s.

I didn’t get very far into them when I found out that he married a girl from Talbot County, Maryland on the eastern shore of the Chesapeake. I contacted the historical society down there to see if they had anything relevant in their collection. They reported back to me that they had several boxes of letters written by Schofield’s wife and her family – 5,000 letters from that same time period. Twelve thousand letters written by the family over the course of half a century! What a great starting point for a book!

At first I intended to focus solely on Frank Schofield’s career, but the rest of the family wrote such great letters! They measured their love for each other by the length and detail of their letters, so I decided to broaden the focus. His parents lived in Penn Yan and their letters included a lot of local history from Yates County. His sister married a fellow who lived in Brooklyn and worked in Manhattan, and there were great descriptions of their life there in the 1890s and early 1900s. His wife was raised on a large estate in Maryland that had been in her family since the 1600s and had 100 slaves at the time of the Civil War. Her divorced mother struggled successfully to keep the estate from bankruptcy and sale.

Mrs. Schofield was also a talented artist and studied in Paris while Frank was stationed on a ship in the Mediterranean, and wrote great letters describing life in Paris in the 1890s. She and her sister and son did a road trip through Europe in 1922, which they called the “Flivver Expedition,” and Frank’s sister wrote a series of letters on a trip she made around the world in 1902 on one of her brother’s naval vessels. So much history comes out of those letters! In addition to reading nearly 12,000 letters, I did substantial research to give them context and link them together. The blurb on the back cover was written by a member of the Yates County History Center who critiqued the manuscript.

“Richard MacAlpine’s book on Admiral Schofield and his family came about because of a long-forgotten stash of letters found in an upstate New York barn, and a recently retired history teacher with the curiosity and time to weave them into a wonderful story of a struggling farm family and a son who went on to become the Commander-in-Chief of America’s fleet. The book, based upon family letters, carries you along through not only the life and adventures of the naval star, Frank Schofield, but also that of his hard-working parents and brother, his sister who married and made a new life in metro New York City, and his well-chosen Maryland wife. This is a very real story of a very real American family in the first half of the twentieth century. I found it hard to put down the book as history unfolds in such a personal way.” 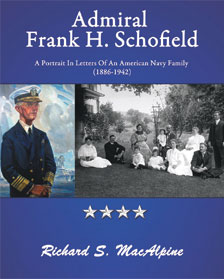 Published by Infinity Publishing, Admiral Frank H. Schofield: A Portrait In Letters Of An American Navy Family (1886-1942) runs 460 pages, includes over 160 photos and other images, and sells for $27.95. It can be bought at the Yates County History Center, Long’s Cards & Books in Penn Yan, and Crooked Lake Mercantile in Branchport. It is available in both print and digital editions on amazon.com and Barnes & Noble.