A Tale of Two Barn House

In the 21st century, people are loving barn living.  If you don’t believe me, take a look on Pinterest, Houzz or the DIY Network where the hit show “Barnwood Builders” follows the crew of the Antique Cabins and Barns company as they reclaim pioneer-era structures. You’ll see beautiful old beams, lots of indoor space, the natural grandeur of wide-open fields, plus the latest modern conveniences.

Better yet, here’s a glimpse at what two couples here in the Finger Lakes did with dilapidated, but comely, 19th-century barns. In West Bloomfield, Patty Sapere and Phil Sacchitella did all the work to create their family home on the barn’s original site. Mark Siwiec and Duffy Palmer moved a disassembled barn to a beautiful location and hired a crew to rebuild it as a retreat. Here are their stories.

Ode to a View 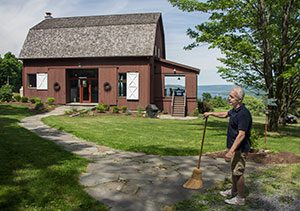 In our interview, partners Mark and Duffy bat anecdotes back and forth about their recently converted barn house. Mark is one of the top two real estate agents in Rochester and a member of several community boards, including the Rochester Philharmonic. Duffy began his career as a teacher and rose to become the Deputy Secretary of Education for New York State, the top education position. He serves on the board of the Rochester Memorial Art Gallery and is president of the board of Young Women’s College Prep. Right now, he’s exploring coming out of semiretirement.

It becomes clear that they love their barn house when, an hour into the interview, they can’t wait to reveal their crown jewel. It could be titled “Hollywood meets Hammondsport,” or “Hathaway’s Hideaway.” An exhausted Anne Hathaway rested in their remote Keuka Lake barn house after her role in the 2012 movie “Les Misérables.” Although her stay there excited locals, it seemed to settle her. She left not only restored, but ready to marry. While they stayed at the house, she and her fiancé made a CD wedding invitation.

Mark and Duffy chose their friend Tom Johnson as designer, and then they searched for a site. Mark found a promising 30-acre parcel that they walked in the dead of winter. When they reached the upper end of the open fields and saw the view, Mark and Duffy knew this was where they belonged.

Tom, who said his role was “to make them happy to be living in the house he designed,” already had a barn for them. By happy coincidence, his neighbor on the east side of Keuka Lake wanted to unload his Civil War era barn. The barn was disassembled and its structural members numbered so a team of Mennonite carpenters could begin converting it into a house.

In retrospect, the first construction decision may have been a minor stroke of genius. “We showed up one day to find a bulldozer clearing the driveway,” said Duffy, who was Tom’s constant collaborator. Placed on the property’s south side, the sinuous driveway is nearly invisible as it curves to the back of the house – the entryway – preserving the magnificent view of meadows and pastures that stretches for miles to the lake and bluff.

In many ways, the house was designed as an ode to that view. Every major room displays it. When Mark slips an apple pie into the oven, the view is framed within a floor-to-ceiling window. Where they eat the pie, a wall of windows reveals a Daguerre-like, 19th-century pastoral diorama. When they awake, it’s to that view at sunrise

The vista, combined with a vast interior space that soars to 28 feet, makes visitors’ spirits soar, too. A large dining table, lots of seating throughout, two patios, a balcony and a porch give Mark and Duffy the perfect space for entertaining.

The house wears its barn heritage well, from its original gambrel shape to the exterior cedar siding. The main entrance, the side porch, the window exteriors and the indoor firewood closet all sport sliding doors characteristic of late 19th-century barns. Indoors, locally made Mennonite cattle railings guard the stairs. A small collection of colorful sculpted-metal chickens perch on hand-hewn, century-old beams. A worn 6 by 10-foot, 48-star American flag hangs above the fireplace.

A stone fireplace is among its many tasteful embellishments. As it was going up, “I told the mason it was too perfect for a barn, and asked that he chip or break some stones and set them more randomly,” Mark recalls. Doors from a Buffalo convent, and 18-foot-long entry treads made from an old oak 4,000-gallon wine vat, fit in naturally.

Mark added an unusual window to his second-floor bedroom: it opens to the great barn interior. On the ground level, two more bedrooms and a sitting room pay homage to the view with large windows, and to the barn with their pine paneling and slate floors.

Whether an ode to a view or an era, this barn house created by Mark and Duffy reveres and respects the land and the barn’s heritage. At the same time, it’s a welcome retreat they can enjoy with friends.

Fit for a big family 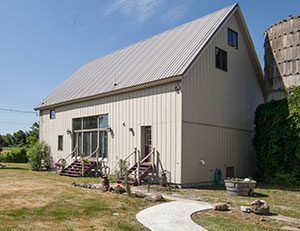 Patty and Phil put in over 30,000 hours of DIY work during a 15-year span to convert their West Bloomfield barn into a house. The gargantuan effort involved their kids, relatives and friends. “Phil and I had always dreamed about owning a timber frame home,” said Patty. For the two single parents who needed a place large enough for their merging families, the only financial alternative was to do all the work themselves. A touch of delusion and obsession might have contributed. “Everyone thought I was nuts,” Phil said. “My friends said, ‘The barn doesn’t need work, it needs a match.’”

Phil was undeterred, but he did have a major challenge: his finances. The property went into default in 2001 when he was dating Patty. No problem – she bought it. For her it was love at first sight. Fifteen years later, it’s still not clear whether Patty married Phil or the barn.

They had to quickly make it livable for their blended family, which included five children ages 11, 12, 13, 14 and 15. Patty and Phil each had full-time day jobs, so Phil set up halogen spotlights, allowing them to work on the project every evening; often past midnight. You might not think an interpreter of American Sign Language (Patty) and a software engineer (Phil) would have the DIY chops to handle such a rigorous construction, but over the years they gained extensive building skills.

Phil says the toughest part was the foundation. “We jacked the thing up with homemade tools and bottle jacks, and put a foundation under it.” For Patty, it was installing the steel siding, chosen for its durability and low maintenance. “Our hands and arms were covered in cuts and blood,” she relates.

Their philosophy for the 3,000-square foot, four-level interior was to keep it simple and barnlike. “We wanted a rustic homey feel with a combination of old and modern,” they note. With plans from architect George Baker in hand, they were ready.

When they needed floor joists, Phil went to an Amish sawyer whose lack of dimensional precision led to the nickname, “Thick and Thin Lumber Company.” The stair balustrades came from the barn’s horse stalls – Patty and the kids removed and refinished the wood. The floor was constructed from salvaged hardwood flooring scraps; leftover floorboards became picture frames. The siding on the kitchen island came from the barn’s old grain bins, and all four bedrooms display exposed ceiling rafters. The kitchen cabinets Phil built feature doors made from barn windows. Patty made tablecloths, placemats and curtains.

Recovered artifacts abound: old bottles from the barn glint from a beam, wagon wheels and steel milk containers adorn the walkway, and a large pulley hangs from a post.

They acquired only the furniture that fit into their style, meaning it was often gently used. The exceptions include modern appliances, simple lighting to accentuate the structure, and an Amish-made, custom dining table with nine leaves. It can seat 20.

The wonderful feeling of its comforting space can surprise first-time visitors, especially when the modest exterior opens to a 38-foot expanse inside. It makes you feel like you’re in an opening in an old-growth forest. Large windows on opposing walls admit copious amounts of soft light. It reflects off the warm-stained woods to bathe you in a golden glow.

Even though years of hard work have compounded the beauty of this barn house, a handful of grandchildren are calling. So they can be closer to them, Patty and Phil have decided to sell their home.

Most consumers buy wine to enjoy within hours or days, often in preparation or anticipation of a social engagement. Some people stock up for…