For ten years, I’ve bicycled the rolling farm roads south of Palmyra. Flat tires, empty water bottles, and tired legs have more than once forced me to pull over and seek assistance. So I’ve gotten to know a few people and I’ve learned that I can probably count on many others should the need arise.

And last week the need arose. Big storms. They arrived an hour ahead of what the “future” radar forecast had indicated. I was only two thirds through my ride when massive dark clouds shouldered over the horizon and swept across the sky. Giant streaks of lightning flashed in the distance. Strong gusts buffetted the bike, leaves streamed across the road.

From a car it would be spell binding. I pedaled faster and considered whether I could make it the four miles to my car.

I couldn’t. Rain began pelting me. So I rose up from my seat and pedaled furiously–past the wind-thrashed corn fields, through the airborn streams of leaves erupting from roadside trees like flocks of starlings, past the few houses of an encroaching suburb and into a driveway. Debbie’s place. Sanctuary. 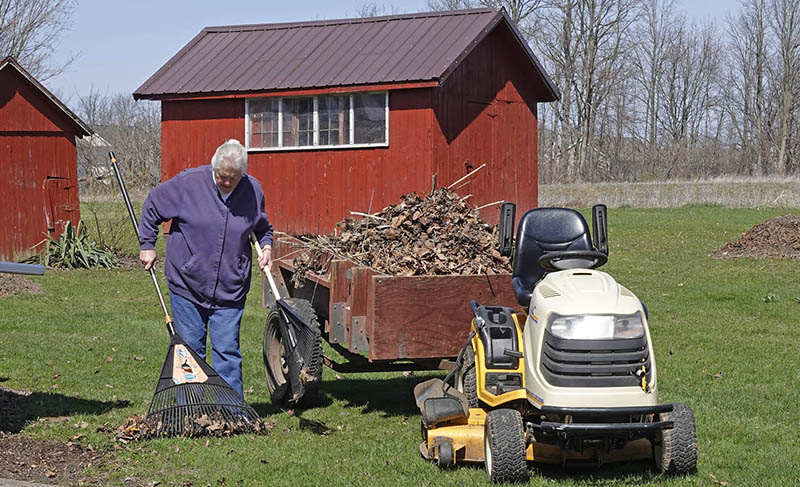 Debbie enjoys working around her house.

I knocked on the door, and this warm and welcoming senior woman ­opened it and granted my request for asylum. For the next half hour we stood in her garage and talked as we watched branches whipping about, lightning flashing, and rain hammering everything in its path. This was her family farm; her neighboring nephews, recently retired, help her as needed. It wasn’t often needed; she still mows the lawn and snowblows the long drive. She swims at the Y. And is looking to take on a middle-aged dog.

Her land is now farmed by an 88-year-old neighbor, who’s trying to figure out his new quarter million dollar, GPS-directed, high tech tractor. After he finished plowing, he had to call his son to figure how to turn it off. We both laughed and wondered if we could be like that at 88.

The rain stopped. I left. But the conversation stuck. That night it woke me up, made me think about the quiet power of a dignified life and how a few small acts of kindness can endure. Thanks, Debbie.

And thanks to Beth, who lives only a few minutes further on my bike ride. She also would have provided shelter. But the thanks are for her artful roadside display that was now glistening in the aftermath of the storm. The display includes a delightfully decorated produce stand, mannequins in roaring ‘20s dresses, brightly painted bicycles, waist high metal letters spelling out short words like “Live,” “Zoom,” “Love,” and an eye-catching roadside garden that in late spring bursts with a deluge of delphimiums streaming down the roadside bank. Today, globes of yellow, orange, and rust mums glowed under clearing skies.

With her ever-changing display, this world traveler and aficionado of the country of India somehow manages to radiate happiness and good will from her little intersection in the rural countryside. When I stopped to chat ten days ago, a silver Corolla with driver’s window came around the curve, spottted her display, and stopped mid-road to gape. From the end of driveway, Beth waved and asked the family in the car where they were from. “Cicero.” She grabbed some garlic cloves from the produce cart and dashed out to present them a little gift from the countryside.

03/12/2020 …and to their hero, Ray Rinaldi. Story and photos by James P. Hughes For dozens of Syracuse area youth and young adults, it’s…