Did you know that just down the road there’s an extraordinary wildlife spectacle going on right now?  One that’s easy to get to and easy to see? One that offers amazing action with ringside seats?

The stars of this show are ospreys, those fish-crazed hawks that rival eagles as the most riveting of raptors. They’re here in abundance. And they’re here now. Candace Cornell, a retired osprey expert from the Cornell Lab of Ornithology says, “They’re out in the open. You can watch everything they do.”

And she means everything.

In early spring, ospreys fly here from the jungles and waterways of Central and South America to start families. By July, they are harried parents trying to satisfy the voracious cries of hunger from their increasingly rambunctious youngsters. 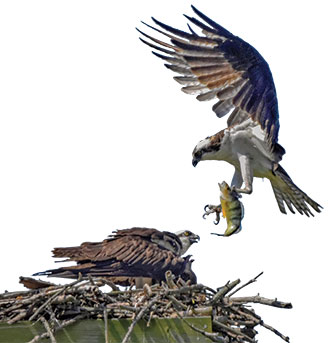 Find a nest (which is easy to do) and you’ll find action. Most entertaining are the aerial acrobatics. If you’re patient, you’ll eventually see dive bombing, stunt flying, furious pursuits, and fearless plunges into shallow waters. And sibling rivalries. When the chicks spot a distant dad returning with a fish, they grow increasingly frenzied and jockey for the best spot to get their share.

As summer progresses, comedic interludes may also lighten the day as, one by one, the rapidly maturing chicks perch on the nest edge trying to gather up courage for that first, often bumbling, and usually quite short, flight. Cornell says with a laugh: “The chicks know how to fly, but they don’t know how to land.”

Long native to coastal areas, ospreys have only recently begun living in the Finger Lakes. Your grandparents probably didn’t grow up with them. Possibly not even your parents. You can almost think of ospreys as 21st-century or millennial birds. They didn’t begin populating the area until after the egg-weakening insecticide DDT (which nearly led to extinction of several raptors) was banned in 1972. From a mere dozen or so in the 1990s, they’ve zoomed to over 300 individuals now.

Where can you find ospreys? By far the greatest concentration is along the shores of Cayuga Lake (see map on page 45). Over 135 nests populate a broad swath that wraps around the lake and sweeps up to encompass the Montezuma swamp area. The short commute to the fishery makes this prime real estate for ospreys.

You can choose from dozens of mini-theater stages that come in the form of nest platforms built atop telephone poles. Many are right next to the road. Some sites even offer common lakeside amenities, such as a picnic table (Stuart Park), a public picnic patio
(Cayuga Waterfront Trail), a lakeside hiking path with a Little Free Library (Salt Point Natural Area), an adjacent waterfall pool for swimming (Great Gully), or a beach (Cayuga Town Hall).

If you find an active nest, pull up a seat at a non-threatening distance of 100-200 feet. If the nesting osprey repeatedly cries out or leaves the nest, you’re probably too close, so move farther away.

Ospreys favor Cayuga Lake for its fish-filled shallow waters at the north and south ends. If you spend time watching them return to the nest, you can almost take a census of the fish species in the shallow waters. Cornell says, “They’ll eat almost any fish under two pounds. I’ve seen them return to the nest with yellow perch, rock bass, brown bullheads, sunfish, and carp. Sometimes even a snake, but that’s usually a mistake.”

If you’re lucky, you’ll get to see an osprey hover above the water as it spies a meal and then plummets, talons outstretched, into the water and emerges clutching a wriggling fish. Specialized oil on their feathers enables

them to submerge and emerge while shedding the weight of water.

After catching a fish, the osprey arranges it in an aerodynamic position: head forward, clutched and held fast in opposing talons that open and close like a log loader. In pictures, it may seem like the osprey is an aerial taxi transporting the fish. Actually, that’s what it’s doing, but Café Osprey is not a desirable destination for the fish. In addition to bringing home fish, the male returns daily with sticks to build the nest.

Ospreys are impressive birds: huge wingspans, fearsome talons, a flesh-tearing beak, piercing yellow eyes, shrill scream. Equally impressive are their nests. A new nest starts out as a sparse collection of sticks only a few inches high and a few feet wide. However, several years of seasonal building adds layer after layer of sticks, eventually turning a nest into a towering turret whose top may extend even beyond the reach of LeBron James standing on tiptoes. And unlike the stick house of little pig number two, these stick constructions can withstand a lot of huffing and puffing. When Cornell went to the Turk and Caicos Islands to study osprey nest durability, she found that the nests had survived two recent hurricanes. 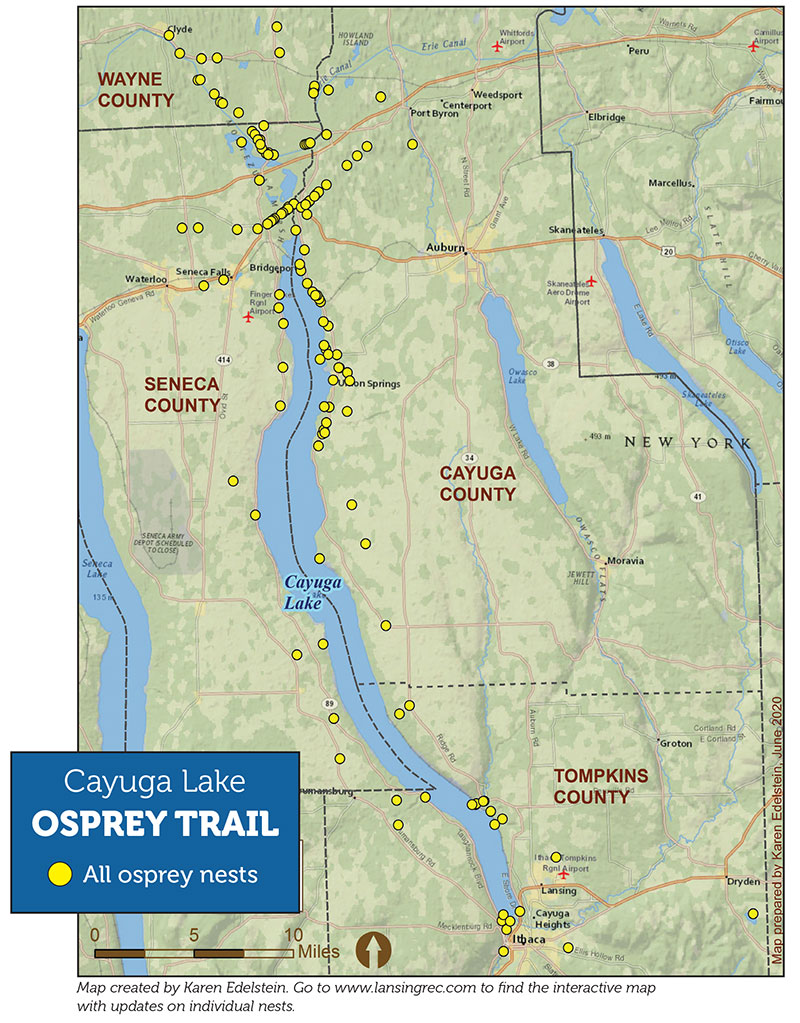 Like human snowbirds, ospreys follow good weather. They begin arriving here by late March to stake their claims on nests and mates. It’s not always first come first served; some nasty spats arise both over real estate and mates.

The female picks a mate based on his courtship prowess (nothing new there). That means the suitor must demonstrate superior fitness, protection skills, and fishing proficiency (their diet is 99 percent fish). The male struts his stuff with aerial acrobatics. After catching a fish, he ascends several hundred feet, crying out for the female’s attention to be sure she watches as he flaunts his catch and osprey manliness.

Over several minutes, the male dives, hovers, and shows off, then drops lower to hover and show off some more, maybe adding in a few loops and swoops, but edging ever lower as he strives to tantalize and persuade the female that he’s the one. Finally, with a great flourish, he hurtles to the nest, talons extended to present the fish, and at the last second sweeps up his wings to brake and land in front of her with a “Ta-da!” If he’s wise (not all are), he gives up the fish no matter how tasty it may be, and hangs around for some relationship building.

If the female chooses him, it’s usually for life. But Cornell notes there is one exception: “If the male turns out to be a poor provider, she’ll divorce him in a second.”

The female lays one to four eggs, which hatch 36-42 days later, in May and June. The male and female ospreys share in incubation, although it is predominantly the female’s job, as is tending the chicks after they hatch. Chicks begin to test their flight skills from late July to mid-August, but still rely on their father to provide fish until they are ready to migrate in September.

The family breaks up as each family member migrates separately. In a few months, when we are shoveling snow, many of these magnificent birds will be perched in the steamy jungles of Central and South America (Venezuelan jungles are a favorite destination), keeping an eye on the monkeys, jaguars, and anacondas as they scan for fish in the waters below. Come our spring, the parents return independently to the same nest to start a new family. The juveniles stay on their wintering grounds for a maturing gap year and return north at 2 years of age.

Fish and habitat draw the ospreys here. That they’ve stayed, thrived, and flourished beyond expectations results in part from the efforts of their many passionate supporters (see sidebars). 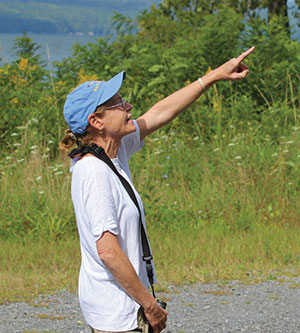 Candace Cornell has birds in her bones, in particular the osprey. After retiring from her biologist job at Cornell’s Lab of Ornithology, she focused her fascination with birds on the osprey. For the past seven years, she has vigilantly tracked, surveyed, photographed, observed, and advocated for local ospreys. Best of all, she has written about them in her blog. It’s a must read.

She vividly describes (and illustrates with striking photos) the ups and downs of osprey lives while giving great insights into their natural history. Of special interest are the adventures of the long-mated pair Orpheus and Ophelia, who she has been following since their first courtship dance. She even installed a webcam above their nest to facilitate her observations. Don’t miss her blog and webcam at lansingrec.com.

What’s her favorite osprey memory? “I help the Cornell Ornithology Lab release rehabilitated ospreys. There’s nothing better than releasing a bird as majestic as an osprey.” Laughing, she describes a release that didn’t quite work out as planned. “This one took off and then crashed into the water. It was going to drown, so I dove in with all my clothes on and brought it back to shore.” 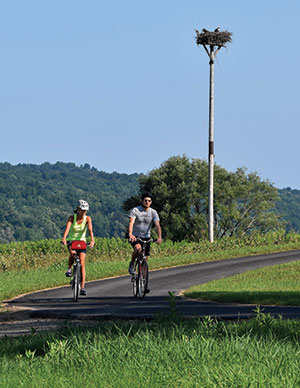 Paul Paradine loves nature and ospreys. “Ospreys are a magical species … there is true wonder in seeing them return each spring,” he says. That’s fortunate, because he’s in a position to help them out. Now the Senior Vegetation Manager for NYSEG and RG&E, Paul has been a force behind the nesting boxes.

The ospreys’ urge to build nests on telephone poles led to electrically-induced fires and power outages. Realizing that ospreys weren’t going to change, NYSEG decided to nudge them above the lines. Alan Poole, retired from the Cornell Lab of Ornithology, designed a nesting box/platform that can be installed on risers above the lines and transformers.

For about a dozen years, Paradine has spent much of his own time coordinating, resolving, and negotiating with government groups, landowners, and interested civilians to install nest platforms. Cornell says, “He’s the guy I call when I find ospreys that need nesting help.” Although the nest box program has been a win-win, dealing with the coronavirus has slowed NYSEG’s ability to deal with osprey nesting issues.

08/20/2020 Shop in Lyons for fresh fruits and vegetables, and everything else that you can find at a farmers market. August 22 Lyons Farmers…