Thanks so much for the article on the “Geneva Renaissance.” It is great to know that a younger generation has discovered the wonders of “The City on the Lake” and are giving it new energy.

My Dad, Fred Reynolds, would have been very glad to see Geneva’s success and proud that his efforts years ago may have played a small part in it. A transplant from urban New Jersey in the ‘50’s, he fell in love with the Finger Lakes. An avid outdoorsman, he envisioned the city’s future as a mecca for recreation and tourism. He was named the Geneva Chamber of Commerce “Man of the Year” in 1974 for his efforts in establishing the annual Lake Trout Derby and the visitor’s center on the lake, as well as his many other civic endeavors. We love visiting Geneva! 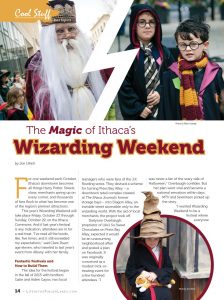 Hi, we’re super glad you all mentioned our sons Gabriel and Aiden in your recent, very well written article about Press Bay Alley’s Wizarding Weekend (September/October 2017), but unfortunately you spelled our last name incorrectly. It’s Gaydos, not Gayos. It’s probably due to a previously written article from last year or 2015. Thanks!

I just enjoyed the September/October 2017 issue very much. Writing and photography are first rate. As always, really nice work.

Idea for expanding your audience: I paged watchfully through, and spotted one, just one, person of color, a tourist from Puerto Rico. As far as I know, we white folks aren’t the only ones interested in scenic places and good restaurants. And white folks aren’t the only ones operating restaurants, cool clothing stores and other businesses. Or the only tourists. But your magazine would make one think that the Finger Lakes were a whites-only bastion.

If I were you, I’d suggest that the complainer go out, take some pictures, and write up a feature. But I’m 75, and I don’t usually go far. This is a job for somebody with energy.

Please direct your responses to mark@lifeinthefingerlakes.com