A week ago, with pumpkin season in full swing and a full moon rising, I headed out to the countryside an hour before sunset. I wasn’t looking for the headless horsemen who terrified Ichabod Crane in “The Legend of Sleepy Hollow.” Instead I wanted to find a full moon rising over a pumpkin patch.

Just as the sun set I found the perfect pumpkin patch south of Victor. It would be great for photography. Thousands of pumpkins were lined up by size on the ground and  on shelves. Wandering about in the deepening dusk were a few eager buyers still searching for pumpkins. A young mom was posing her pair of toddling twins, crowned with pumpkin caps, among pumpkins bigger than them.

Illuminated only by the full moon, a tractor arrived, pulling a wagon load of pumpkins. I guess it was the pumpkin farmer’s version of “Make hay while the sun shines.”

Three members (representing three generations) of the Duvall family hopped off. The unloading would take place the next day. So a bit of talking was okay now. And farm talking at harvest time usually revolves around the harvest.

I learned they need lots of seed to plant their 50 acres of pumpkins. There’s 10,000 seeds in each bag. They sow about 750 seeds per acre. They plant on both tilled and untilled fields. The untilled fields being a new trend that can save time and gas if all works out. 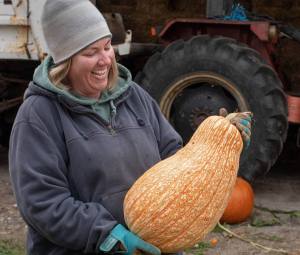 Pumpkin farmer Amy Duvall retrieved a squash (pumpkins are squashes) from the harvest wagon for her son’s upcoming wedding.

But the only thing about farming that ever works out is that nothing ever quite works out. A pumpkin vine typically produces two to three pumpkins per vine. So 37,500 seeds (750 x 50) could produce close to a 100,000 pumpkins—if things worked out. But a wet cool May led to an abundance of slugs eating the seedlings and a reluctance of bees venturing out to pollinate them.

In other words, things could’ve worked out better; there could’ve been more pumpkins. It’s the rare farmer who doesn’t think the harvest could’ve been better. On the upside, to my eye, the pumpkins looked big. So did the crowds seeking them out. So the Duvalls, seeing their harvest disappear rapidly, were generally happy after a long day.

Come October, roadside pumpkin patches sprout everywhere. The increasing popularity of Halloween has seen to that. I stopped by two of my other favorite patches:  Powers Farm Market and Chase Farms. These bigger places add many attractions to bring in the suburban crowds. Powers is famous for their three connected tall cornstalk tepees; the biggest one glows with tiers of gloriously carved jack-o-lanterns stretching to the rafters in pitch dark—kids love it, so do parents, and so do grandparents. Chase adds a corn maze; when I go there in the morning to pick raspberries I see several empty school buses. The kid are out picking pumpkins or digging potatoes.

Curious about the rigors of handling thousands of ten to thirty pound pumpkins in less than a month, I asked several farmers about this. They all acknowledged that shoulders, elbows, knees, wrists, and backs all ached to some degree but most thought their hands got the sorest.

For them, the sorer the better. With a long winter ahead, they’ll have lots of time to recuperate.

“Cloistered amid the foliaged hills that cradle the Owasco Valley … Moravia … a repository of history and a shrine of scenic wonders.” Harry…