Everyone loves a parade, and Downtown Auburn is a great place to see one. On Saturday, November 25, the Downtown Auburn Business Improvement District and the City of Auburn will present “Miracle on Genesee Street,” and the 31st Annual Holiday Parade. This parade is a popular custom, beginning at 6 p.m. at the corner of East Genesee and North Fulton Streets atop East Hill. It travels west along Genesee Street, through the heart of Downtown, and turns left onto William Street. It continues around the City Parking Garage on Lincoln Street and ends at Memorial City Hall.

New this year, the City showmobile will be in front of Silbert Optical, to host our local dignitaries. Also, Finger Lakes Radio Group will be doing a live broadcast with classic Hits 99.3 and giving away prizes from 5 to 6 p.m., then announcing the parade from 6 to 7 p.m.

Approximately 50 businesses and community organizations partake with floats, music and holiday performances. Past parade favorites include numerous area fire departments, Captain Jack & his Pirates for the Pantry ship, Skaneateles Dickens characters, the Knights of Columbus, and the always creative and over the top award-winning float by Skills USA at Cayuga-Onondaga BOCES. Cheer on your favorites, as participants compete for cash prizes in the top-three float competition. Plus there will be plenty of free family activities happening before and after the parade inside APT, and on the City Hall steps & South Lawn.

5 to 8 p.m. –  Community Festival of Trees on the City’s South Lawn

For many years, the BID has awarded cash prizes for the best parade floats. They are judged based on creativity, holiday theme, enthusiasm of those participating, and ability to identify the group/organization that created the float. The first place float is awarded $150, second prize is $100 and third prize is $75. Winners are announced after the parade.

As tradition, Mr. & Mrs. Claus will arrive at the end of the parade, riding on top of the Knights of Columbus fire truck, equipped with holiday lights and music. After the parade, they will stroll over to City Hall steps, and join the City’s annual Tree Lighting Ceremony and caroling. This is always a crowd favorite that gets everyone in the spirit. 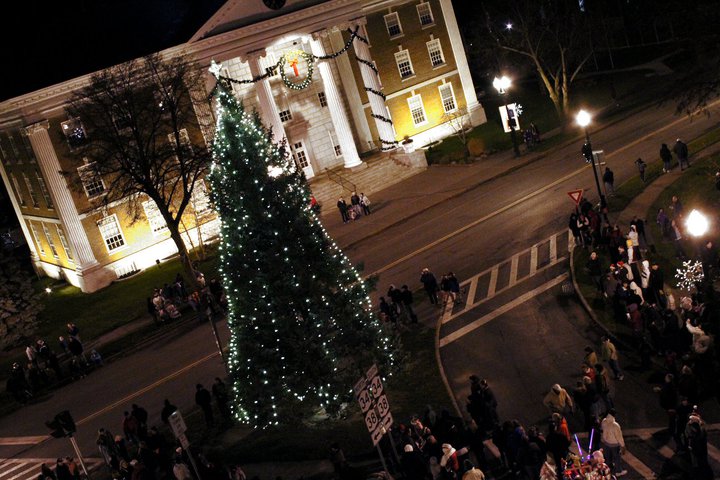 The City’s approximate 30-foot evergreen tree, located on the North Lawn, will shine much brighter this year, thanks to the efforts of 9-year old Auburn resident Finn Bell. Finn donated his birthday money, and the funds he raised from returning bottles & cans to pay for an illuminated star for the top of the City’s tree in memory of his deceased mother, Bridget Bell, who passed in 2011.

In addition, downtown Auburn’s newcomer, Lyons National Bank also contributed funds towards making the City’s tree brighter, with even more white lights. Also, the Bartolotta family and R&M Real Estate Group generously installed white lights in all the trees on State Street to make that area more festive for their downtown tenants and their patrons.

Trees will be featured after the parade from 5 to 8 p.m. The trees and lights will be provided and ready for their sponsor decorations by November 17 and need to be completed by November 23. The night of, choral groups & performers will add to the festivities.

BID will again host the downtown holiday decorating contest, and the top three designs will be awarded downtown gift certificates. BID district members are encouraged to create unique holiday-themed windows and store front displays by November 20, judging will happen the next day, and winners announced after the parade.

Some of the trees decorating downtown were graciously donated by Strawberry Fields Hydroponic Farm. The BID staff and board also thank our co-sponsor the City of Auburn for their support. In addition, BID was awarded $2,000 to help supplement live entertainment costs for the event, and we are very grateful for the Senator John A. DeFrancisco Arts in Cayuga County Program and Auburn Public Theater’s continued support.

November 25 is also Small Business Saturday, so why not make a whole day out of it downtown? Purchase Christmas gifts at the many retail stores located downtown. Before the festivities start, enjoy lunch at one of nearly two dozen restaurants & eateries, and after the parade, stick around for dinner as well. This day presents a great opportunity to show support for local businesses.

So, please join in the festivities and bring all your family & friends that are in town for Thanksgiving. For more information, please contact BID at 315.252-7874 or visit the events page on www.auburndowntown.org.

The cradle of aviation and the heart of the New York wine country. The historic village of Hammondsport is tucked between rolling wooded hillsides…