Last weekend was paradise on ice. And all sorts of ice lovers came to celebrate.

What was the occasion? It was probably the last chance for ice fanatics to safely frolic on Honeoye and Conesus lakes. They were still frozen solid. About eight inches. So there was a whole lot of sipping, zipping, gripping, and ripping going on. And a bit of slipping.

But not now. Now it’s too late for ice frolics. The warm weather forecast by the meteorologists last week arrived. The ice is melting. It’s too risky. Stay off. 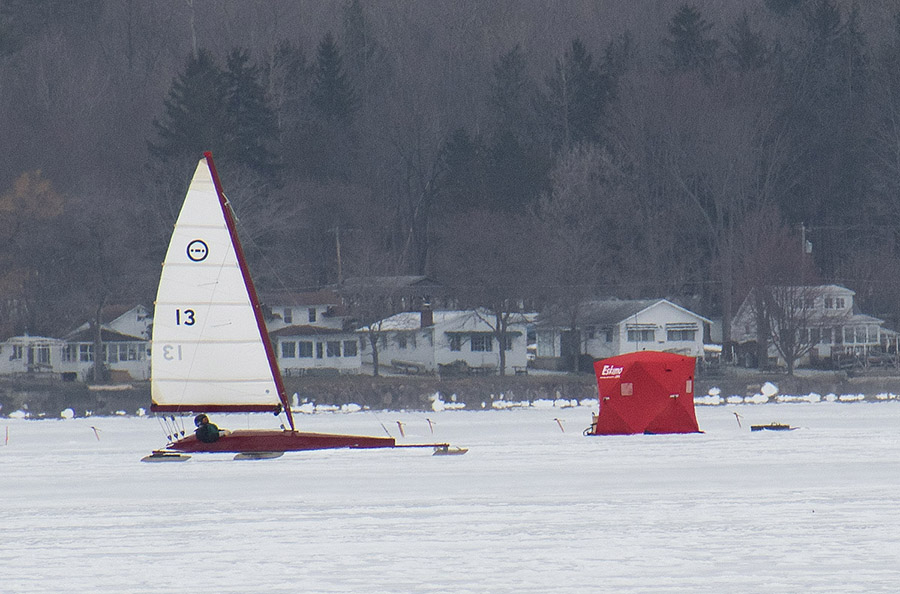 With good ice and a steady wind, ice boaters sail across Honeoye Lake.

But last weekend the ice was great. Not perfect but clean and hard. The late February warmth had cleared the ice of snow. The early March cold spell froze it again. Almost everybody was happy. Especially the ice fisherman. They hate dragging sleds filled with equipment through deep snow; it’s a heart-pounding, sweat-soaking slog. An exhausting trudge. Snow also stymies ice boats and forces ice riders (motorcyclists) to plow a track.

I met up with Brett and Julie Bulmer on the north end of Conesus Lake. For at least forty years they have been driving 140 miles roundtrip to ice fish on Conesus. They’re closing in on 100,000 Conesus miles. They knew this would be their last day at Conesus. Julie said Brett would head to the Adirondacks to extend his ice fishing a few weeks.

At Honeoye Lake, ice fisherman congregated at the southern end. Spirits were high. But the catch was low. So it was no surprise when I came across three young guys from Springville chilling out in their shelter, cooking hot dogs by weaving them into the protective grill of their propane heater. 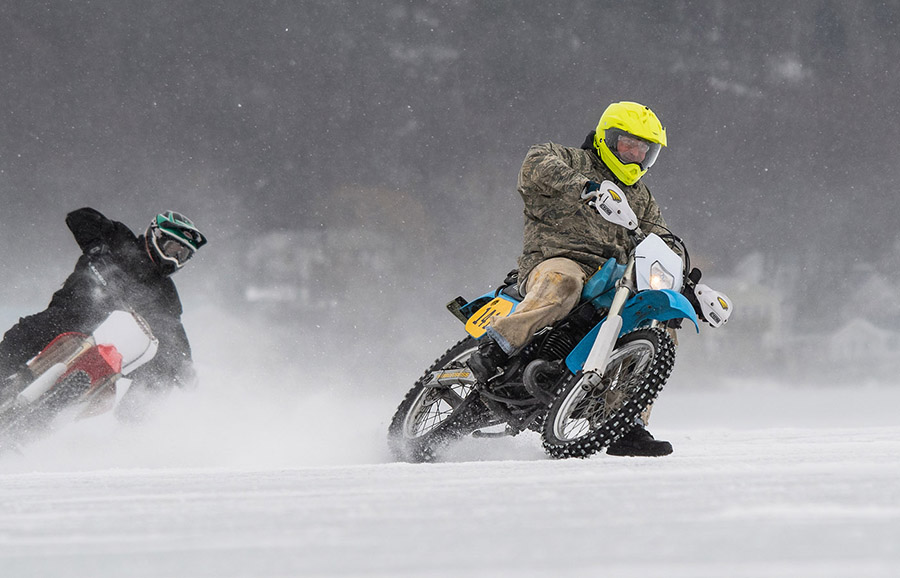 Dave Storie (right) and Chris (left) can lean hard on turns thanks to screw-studded tires.

A half mile to the north several ice boats crisscrossed the width of the lake. Clear hard ice really excites ice sailors. A steady stiff breeze thrills them. Together, these two conditions become irresistible. When I left, heading north on East Lake Road, two ice boats paralleled me and kept pace. I was going about 35 mph. 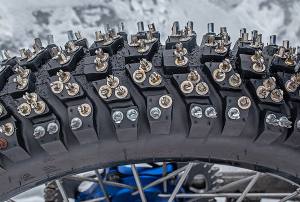 On the north end, a handful of ice motorcyclists ripped across the ice on tires ($750/pair) studded with a few hundred inch-and-a-half screws, whose relentless grip allowed them to defy gravity and slippery ice as they took hard curves while leaning over at 45-degree angles. They were all middle-aged guys. They stood around talking as much as riding. Ice activities have a strong social component. But when they rode, it was exhilarating. On straightaways they easily hit 60 mph. That’s fast.

But it’s a speed the ice boats can easily match when strong winds, good ice, and courage combine.