As soon as people harnessed electricity, they saw that they could put it to many uses beyond Edison’s famous light. They could use it to move things – big things.

Many communities already had public transportation horsecars; closed coaches drawn along tracks in the street. Run some wires, beef up the tracks a little, and you had a new transportation system: tireless, quiet, unargumentative, and clean (unlike horses in every way). Rochester electrified its routes in 1889, Hornell and Canandaigua by 1892.  Before you knew it electric railways – trolleys, streetcars, interurbans – stitched the Finger Lakes together.

Most trolleys operated with a power pole that angled up to contact the overhead line. With two poles and driver controls at each end of the car, you could run your return route without having to turn around, and passenger seat backs could be switched to face either way. 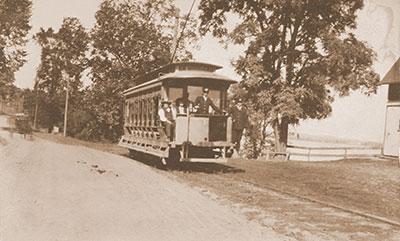 The trolley ride between Penn Yan (at the tip of Keuka Lake’s east branch) and Branchport (tip of the west branch) cut across the base of Keuka Bluff, taking in Keuka College on the way. On hot summer days, people caught some breeze with a steamboat ride from Penn Yan to Branchport, and then took the trolley back. On at least one occasion, the trolley line delivered a Sears house. There’s a blurry buggy on the left.

The trolley ran between Geneva and Rochester – no doubt a boon to Hobart and William Smith students longing for brighter lights. Or you could travel eastward, through Waterloo and Seneca Falls, to the shores of Cayuga Lake. (Besides the trolley and motorcars, notice the buggy.) 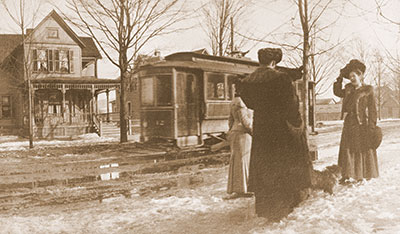 The streetcar would keep your shoes, your coats, and your long skirts out of the slush and snow. But as these Corning ladies (and their little dog) are too-well aware, sooner or later, you’ve got to step off. Photo courtesy Corning-Painted Post Historical Society: Isabel Walker Drake.

Trolleys took riders throughout cities, but also carried them between cities. You could ride electric interurban lines from New York to Boston, Philadelphia to Allentown, and Rochester to Buffalo with no flying embers, no roaring engines, and no choking smoke. When Governor Franklin D. Roosevelt established a state sanatorium in Mount Morris, he hoped that families could visit by taking the trolley down from Rochester, just as students for decades had commuted down to the normal school in Geneseo. Trolleys joined Auburn to Ithaca, Cortland to Preble, and even Honeoye Falls to Lima – besides giving local service in Rochester, Syracuse, Elmira, Hornell, Seneca Falls – and even a branch to the State Fairgrounds. Photo courtesy Corning-Painted Post Historical Society: Isabel Walker Drake. 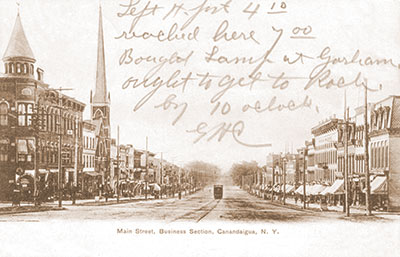 Imagine Canandaigua’s Main Street without a single motorcar. Settle into a seat on the trolley and you could safely take your eyes off the road to gaze at the lake below. Future aviation giant Glenn Curtiss (“GHC”) mailed this card to his wife, keeping her posted on a 1907 motorcycle ride from Hammondsport to Rochester, with a stop at Gorham to buy a lamp as night closed in.
Photo courtesy Curtiss Museum 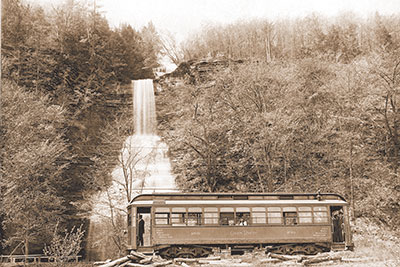 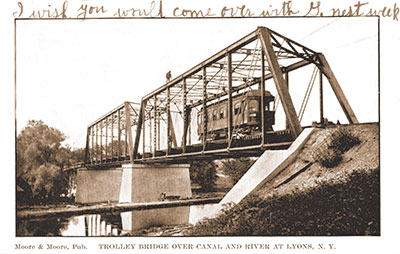 Interurban lines glided across rivers, ravines, and the Erie Canal. This particular route took in Lyons on the way from Rochester to Syracuse and Manlius. (Notice the man atop the bridge.) 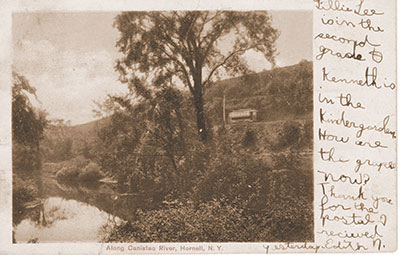 You could also wend along the forested Canisteo River, between Canisteo and Hornell.
Photo courtesy Curtiss Museum

Hornell riders had no lake nearby, but they, too, appreciated a summer breeze. Notice the rolled-up awning and the low-screened side. Photo courtesy Steuben County Historical Society 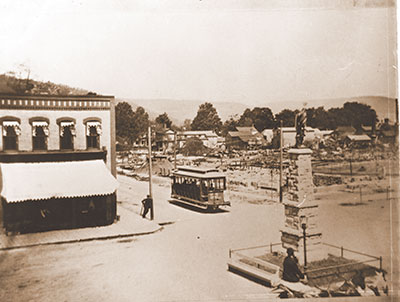 An 1896 fire cleared a good-sized swath of Painted Post, including homes, hotel, machine shop, and livery stable. But the trolley kept on trundling, and the Indian statue still gazed down.  Photo courtesy Corning-Painted Post Historical Society

Hornell investors included this “portrait” shot in their prospectus touting a proposed line between Hornell and Bath. But a motorcar is lurking at the right, and millions more would be following behind. That new line would never be built, and Hornell trolley cars would be sold for chicken coops. President Franklin Roosevelt would send New Deal workers to pull up the tracks in Penn Yan. The last Rochester trolley rolled back to the barn in 1941, and Finger Lakes trolleys became a Finger Lakes memory.  Photo courtesy Steuben County Historical Society