“Ready for its close up”

Popcorn and movies go together like the Ohmann family and the theatre that bears its name. It opened in Lyons in December 1915 during the silent movie era when stars like Charlie Chaplin filled the silver screen. While the historic landmark was sold and shuttered for a number of years at the end of the 20th century, the third generation of Ohmanns has fully restored it. The 20th century has spawned many changes in the film industry, and numerous theatres have come and gone, but the marquee on the William Street theatre continues to illuminate the letters in the OHMANN sign. As a beacon to generations of moviegoers, it can be seen from three different directions.

“I love the theatre business,” admits Bob Ohmann, whose grandfather Burt and Uncle Amos built the theatre and operated it through the 1930s. Burt’s sons Robert and Myron took over its management for the next 20 years. Robert eventually ran the theatre as a sole proprietor and his young son, Bob, the present owner, often sold popcorn and tickets.

In 1980, the theatre was put up for sale. The new owners operated the Lyons theatre until 1993 when they closed it and opened a multiplex cinema in Newark.

“I used to walk by the theatre whenever I came up for a visit from North Carolina,” recalls Bob, who owns a construction business in Raleigh. He credits his wife Leslie with encouraging him to buy back the movie house in 2004 after it had become very rundown. “It was like a scary movie,” remembers Ohmann, who is now semi-retired. The seats of the unattended theatre were covered in cobwebs. Even worse, pigeons had gotten in through a trap door that blew open in the stage floor. But within a few short months, the Ohmann Theatre was transformed and reopened in 2005. “The bones were here; most old buildings are not in as good condition,” says Ohmann. The first thing he revived was the electrified marquee sign.

The work was carried out by Chrisanntha Construction Inc., the same firm that oversaw the restoration of Geneva’s Smith Opera House. Renovations were extensive but respectful of the original structure. Upgrades included restored woodwork and trim, new flooring, carpeting and full bathroom facilities. New seats were purchased from the same manufacturer that provided the house seating in 1914. These seats are still used in the balcony. Old projectors which used reels of film were replaced in 2010 by a new projection system with both film and DVD capabilities.  Special surround-sound and digital stereo is provided by a new sound system.

Adjacent to the theatre, a renovated shop – formerly a drug store, soda fountain and candy shoppe – is ideal for small audiences, meetings and presentations. In its window is an original Simplex movie projector.

“What a wonderful asset it has been to our Lyons community!” says Patricia Alena, President of the Lyons Heritage Society. “When Bob finished the restoration, the theatre project gave some momentum to restore or remodel other of our historic buildings in Lyons, including the Hotchkiss Building, Growler’s (Centre Building) and Newberry’s.”

The Balcony is Open

Moviegoers are greeted at the Ohmann by nostalgic movie posters of classic films like “Singin’ in the Rain,” “Rio Grande” and “Casablanca,” which line the long, sloping entryway. The use of oak on the walls, partitions, woodwork, stairways and even the bathroom stalls provides a warm early-20th-century feel. A rich interior color scheme of maroon, blue and gold in the upholstery, curtains and carpets creates a glamorous setting. Cinema fans have a choice of 400 available seats; those in the balcony still have hat holders underneath, a reminder of when men wore fedoras.

A small number of dedicated employees, including Ohmann’s lifelong friend Rick Wadsworth, keeps the theatre clean and welcoming. General Manager Tom Herendeen is described by Ohmann as a “special person” who makes the place run smoothly.

From its earliest days, the Ohmann Theatre has been more than a movie house. A large stage has hosted a variety of live performances. In the early 20th century, the railroad brought vaudeville shows to Lyons, then a booming town. A 1921 poster promotes a wrestling match between “Tarzan” Wilkman and “Ironman” Lauster with “musical entertainment between times.” The theatre’s history also includes its use for various community purposes: hosting Civil War veterans, sending off new enlistees to World War I, and serving as Lyons’ designated disaster holding area during World War II.

Theatrical productions tapered off by the 1940s and gradually ended by the 1950s as movies flourished. Ohmann’s personal favorite film, “The Sound of Music,” was shown in celebration of the theatre’s 95th anniversary. “Lyons is a family-oriented town; restricted movies don’t sell,” says Ohmann.

Since reopening in 2005, live productions returned, including two Civil War plays presented by the local historical society. A flick of a switch parts the gold-tasseled velvet curtain and retracts the wide screen revealing a large stage.

Local groups continue to use the theatre for meetings, conferences, and reunions with many fundraisers held there each year. “In 2015, the theatre, the Lyons Heritage Society, and the movie ‘Gone with the Wind’ all celebrated anniversaries. The Lyons National Bank along with Bob Ohmann held a special showing of the 1939 movie, all to benefit the Lyons Heritage Society,” says Alena.

The original organ that once provided the musical accompaniment for silent movies is gone but has been replaced. Lyons resident Charles Finley, a lifelong organist who played at St. John’s Lutheran Church and other local churches, donated his own Rodgers organ to the theatre a few years ago. “That’s the kind of stuff that makes you feel good about this town,” says Ohmann.

Local organists were recognized at the theatre in 2013 with a performance on the newly dedicated organ by Tim Schramm, who has also performed on the Mighty Wurlitzer at Rochester’s Auditorium Theatre. Pat Gorthy and her late husband Robert sponsored the concert, which included a showing of “The Blacksmith,” a silent movie starring Buster Keaton. “It went over very well,” recalls Gorthy. Younger attendees saw a silent film with musical accompaniment for the first time, while others “renewed the experience.”

“Tourists are enthralled with the theatre and our local residents are drawn to it for the first-rate movies shown there at very reasonable prices,” says Alena. People from across the country come to see the theatre and enjoy a weekend in the Finger Lakes. Business is up 30 percent from last year due in part to the closure of the Newark multiplex, word-of-mouth about the Ohmann’s dynamic atmosphere, and the ‘Star Wars’ movie that was booked for several weeks.

In 2006, Bob Ohmann was presented with the Theatre Historical Society Honorary Member of the Year Award for his efforts in renovating and reopening his family’s historic theatre. The 1,000-member society praised Ohmann “for his efforts to bring the theatre up to modern standards while retaining its old-fashioned charm.”

The theatre renovation is just one way Ohmann gives back to his hometown. He has contributed to the Lyons Community Center, the Lyons Fire Department, and the Lyons Central School, among other organizations. He and his wife are part owners of the Newark Pilots and of the Geneva Red Wings. Both teams are members of the Perfect Game Collegiate Baseball League. Does the movie theatre owner have a favorite baseball movie? The 1984 Academy Award nominee, ‘The Natural,’ of course.

Boom and Bust: America’s Journey on the Erie Canal

This 30-minute documentary about the rise, fall and rebirth of the Erie Canal will be shown at the Ohmann on Friday, September 23 at 1:30 p.m.

Directed by Academy Award-winning filmmaker Paul Wagner, the film debuted in 2015 and was an official selection at the Syracuse International Film Festival and the Virginia Film Festival. Dr. Daniel Ward, a member of the Board of Directors of the Canal Society of New York State, will be there to answer questions. Ward, a folklorist and historian, is co-producer of Boom and Bust with Steve Zeitlin.

Boom and Bust opens with 20th century black and white film footage heralding the Erie Canal as the “first Empire Builder in our history.” Subsequent views of today’s quieter waterway and the final voyage of the last remaining commercial vessel are accompanied by soulful lyrics and music of the 19th century Stephen Foster song, “Hard Times Come Again No More.”

The Erie Canal story is one of industrial expansion, followed by its commercial decline that impacted cities and factories that once flourished nearby.  Filmed on location, it offers first-hand accounts of workers from several now-shuttered industries along the canal’s route. Former scoopers at the grain elevators on the Buffalo waterfront and spinners at a boarded-up Seneca Falls textile mill are among those who share their memories. Alternately poignant and humorous, these stories include Tugboat Captain Steve Wunder’s recitation of his poem, “Dipper Dredge No. 3,” about the once mighty steam-driven canal dredge.

The film gives the manmade waterway its due with narration by experts who have studied its influence and workers whose livelihood depended on it. Folklorist Bruce Jackson photographs canal structures like the “Flight of Five Locks” at Lockport and credits the canal with making America rich. Despite changing fortunes, hope is expressed through the revitalization of the 21st century canal as a tourist and recreation destination.

Copies of the DVD can be purchased at the showing for $15.00, at Amazon.com, or from Paul Wagner Films at ellen@paulwagnerfilms.com. 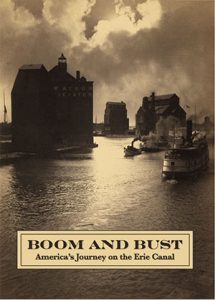 As part of a Wayne County tour during the 2016 Global Mural Conference, the public is invited to view Boom and Bust: America’s Journey on the Erie Canal at the Ohmann Theatre and attend additional programming at a cost of $10.

Following the film Joe Concra from the 0+ Project in Kingston, New York, will discuss how the celebration of art and music is used to bridge access to health care for artists directly with a coalition of health care providers and health resources.

Gigi Alvare will share how the  Rockwell Museum in Corning has collaborated with a high school learning center using the museum’s art collection as a catalyst for student creative writing and designs for larger murals  in the community.

Mark DeCracker of Mural Mania in Lyons will lead a village mural walking tour in Lyons.

Learn more about the history of the Ohmann Theatre in a display at the Hotchkiss Peppermint Museum. It is located at 95 Water Street, in the Hotchkiss Essential Oil Company Building owned and managed by the Lyons Heritage Society. The museum is open July and August from 10 a.m. to 3 p.m. on Fridays and Saturdays; other times by appointment. Call 315-946-4696 or 315-946-9154.