The Rosamond Gifford Zoo hires an esteemed local chef to help expand its role as a premier special-events venue.

Where else in the Finger Lakes can you snack with a pachyderm or join a Crested Coua for cocktails? Recognizing its unique ability to provide an unforgettable experience, Syracuse’s favorite global wildlife attraction is upgrading its event spaces, complete with a top-notch culinary team.

“It’s a venue with a purpose,” explains Dan Hudson, the zoo’s new executive chef of catering. “We provide great food and a beautiful backdrop for events here and the proceeds go to support the care of the animals.”

The zoo is home to more than 700 of them representing 216 different species – from tiny poison dart frogs to 8,000-pound Asian elephants. Many are threatened or endangered.

The zoo is one of only 240 institutions in the country accredited by the Association of Zoos & Aquariums. It signifies that it meets the highest standards of animal care and welfare, wildlife conservation education, and guest experience.

Events like weddings, corporate retreats, company picnics, and fundraisers generate revenue for the zoo. Dan is employed by Catering at the Zoo, a subsidiary of Friends of the Zoo, a nonprofit organization specifically created to provide financial support for the welfare of the zoo’s animals. Event capacity ranges from a minimum of 50 people to 2,000 or more when the entire zoo is rented.

A 2008 graduate of Syracuse University’s hospitality management program, Dan has worked in area kitchens since he was in high school. “I always wanted to be a chef,” he explains. “I got my degree from SU but I really wanted to go to culinary school.” 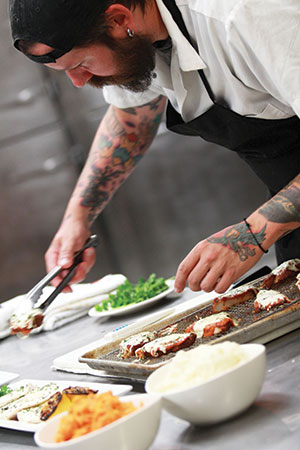 Instead, he learned the ins and outs of preparing food at Fayetteville restaurants Arad Evans Inn and Papa Gallo, and then joined Phoebe’s in Syracuse. He moved to the Sherwood Inn Restaurant in Skaneateles where he spent 10 years, progressing from sous chef to executive chef to director of food and beverage. In 2019 he went to the Marriott Syracuse Downtown as chef. Dan joined the Rosamond Gifford Zoo this May.

A California transplant, Dan came to Canastota, New York, when he was a teen. The Finger Lakes has become his inspiration. “Great things come from all parts of the area, from the agricultural innovation at Cornell University to the variety of wine from our wine trails. Everyone is passionate about what they create, but don’t take themselves too seriously.

“In addition to events here at the zoo, plans include opening a restaurant that will operate during zoo hours,” he reveals. “It will be more fast-casual than sit-down. As we develop the concept and plan the menu, our focus will be on local produce, meat, cheeses and baked goods so that what we serve is really fresh and healthy. I’m an ingredient-driven chef focused on high quality and keeping it simple.”

If Dan had to name his signature dish or cuisine, it would be “elevated home-style cooking” or “regional American cuisine.” “Think comfort food like pot roast, mac and cheese, and prime rib,” he says. “I like using what most people have in their pantry and showcasing what’s in season.”

So far at the zoo, customers have responded well to the food options and price points he’s presented, and to the zoo animals that join the festivities. While Dan has nothing to do with the “animal encounters” – they’re orchestrated by the zookeepers – he appreciates what they bring to the table, so to speak. “Two camels attended the most recent cocktail hour, which was held on the courtyard. An owl, a sloth, and a porcupine have also made guest appearances there.

“I like the people that I work with – the Friends of the Zoo organization, the zookeepers,” he adds. “Everyone here is passionate about what they do, and dedicated to the mission of sustainability and conservation. Because the Rosamond Gifford Zoo is such a worthy cause, I feel that what I do here is more than just making dinner.”

06/10/2021 There’s excitement in the air in the Genesee Valley as the Dansville Festival of Balloons LTD. The Board of Directors has announced the return…