“Hodinöhsö:ni’ Women: From the Time of Creation” Opens March 24

A timely new exhibit at Ganondagan State Historic Site opens to the public on Saturday, March 24, 2018. “Hodinöhsö:ni’ Women: From the Time of Creation” examines the many ways in which Hodinöhsö:ni’ women have acted as positive forces in our world, and provides a glimpse into their complex and sophisticated way of life. As the exhibit unfolds, it demonstrates that, from the time of Creation to the present, Hodinöhsö:ni’ women continue to provide guidance, wisdom, healing, joy, sustenance, hope, peace and love to the world. 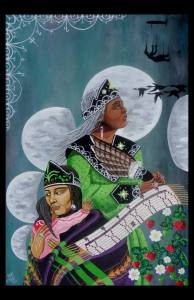 “There is a strong connection between the American suffrage movement and the Hodinöhsö:ni’,” noted Seneca Art & Culture Center Curator and Interpretive Programs Assistant Michael Galban. “Using Hodinöhsö:ni’ art, both historic and contemporary, this exhibit outlines the reasons why Hodinöhsö:ni’ people—and particularly Hodinöhsö:ni’ women—have had an impact on the way we, as modern people, regard access to justice and find balance.”

The exhibit—the first new addition since the opening of the Seneca Art & Culture Center in 2015—touches on five important moments in time when Hodinöhsö:ni’ women have had a major impact. The exhibit is designed to help the viewer consider all the ways, throughout history, in which Hodinöhsö:ni’ women have appeared and worked to sustain their culture of equity, justice and the power of thinking with a “good mind,” and how they continue to be a model for the world.

The five exhibit sections are:

“It’s an honor to be included among the stories of our Hodinöhsö:ni’ women,” said Michelle Schenandoah (Oneida, Wolf Clan), an inspirational writer, speaker, thought leader and one of the seven women featured in the “Walking in Two Worlds” section of the exhibit. “Take time to learn what it means to be a lifegiver from our Hodinöhsö:ni’ point of view; this is the sacred role of being of a woman—which the United States omitted in the formation of its government that is based on our Hodinöhsö:ni’ life ways.”

Interpretive tours on Saturday, March 24 will be ongoing, and additional related programs will be featured. The new exhibit will be open for regular hours that day from 9 am to 4:30 pm, and then will follow regular Seneca Art & Culture Center hours, Tuesdays through Sundays. Winter admission to the Center (through April 30) including the Iroquois Creation Story film, is $6/adults; $3/seniors and students 12 years-college; $1/children 5-11; and free / children below 5 years of age and for Friends of Ganondagan members.

by Laurel C. Wemett Staying as healthy and productive as possible despite a chronic health condition often depends on having access to occupational therapy….