More than 650 cyclists are crossing New York State via the Erie Canalway Trail between Buffalo and Albany as part of the 21st annual Cycle the Erie Canal tour organized by the statewide nonprofit Parks & Trails New York. Cyclists from 39 states, Canada, and Australia have turned out to experience one of our nation’s most significant and historic heritage regions.

On Tuesday, July 9 cyclists arrive in Seneca Falls, having completed Day 3 of the 8-day, 400-mile tour. They will have watched bridge tenders raise and lower the famous Erie Canal lift bridges as they cycled through quaint canal towns. In Palmyra, riders can visit the farmhouse of Joseph Smith, founder of the Mormon religion. They will culminate their day in Seneca Falls with visits to the Women’s Rights National Historic Park, National Women’s Hall of Fame and the Elizabeth Cady Stanton home, then enjoy the local eateries in town.

Covering between 40 and 60 miles per day, cyclists travel along the Erie Canalway Trail, which is now more than 80 percent complete and will, by 2020, be completed as part of the statewide 750-mile Empire State Trail.  This year’s tour will treat cyclists to riding the most amount of trail since the tour’s inception, thanks to the openings this year of new trail sections in Pendleton in western New York and Pattersonville in the Mohawk Valley. 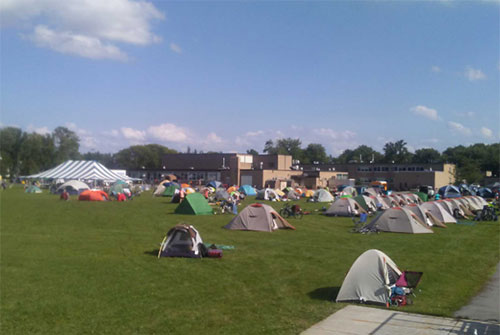 Cyclists camp in a “tent city” at each stop along the trail.

“The 21st annual Cycle the Erie Canal tour is a wonderful way to celebrate the Erie Canal Bicentennial, plus, it’s fun, healthy, and good for the economy,” says Parks & Trails New York Executive Director Robin Dropkin. “We have cyclists aged 5 to 86 from 39 states, Washington D.C., Puerto Rico, Canada, and Australia and they all get to experience what makes the Erie Canal and upstate New York so special.”

Parks & Trails New York is New York’s leading statewide advocate for parks and trails, dedicated since 1985 to improving our health, economy, and quality of life through the use and enjoyment of green space.

Schedule of Events for Seneca Falls

A couple of years ago on a January afternoon, I saw my first gas well flare. It was a startling sight. I was driving…