Markowitz Florist, established in 1934, is the oldest florist in the Syracuse area. Jini Cerio purchased the business in 1987 from one of her daughter’s sets of godparents. Jini saw it as an opportunity to spend time with her young daughter by bringing her to work with her. 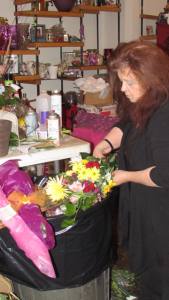 It was also the chance to be creative and artistic that drew her to the floral business. She majored in art in college before injuries from a serious car accident sidelined her. She had started Enchanted Florist on Park Street on Syracuse’s west side as a part time business a few years earlier.

Sadly the artistic end of the floral business has diminished in recent years. “What can you do when Martha Stewart says just throw them (flowers) in a vase,” quips Cerio. This has not stopped her from being showy with her arrangements or from making creative floral displays of everything from golf clubs to sports cars. She proudly displayed a picture of an ace of hearts she recently made out of flowers on her cell phone. It made me think of those elaborate floats at the Rose Bowl parade.

Contributing to the pigeon holing of creativity has been the advent of wire services and telemarketers that have transformed the floral business. The web is inundated with all sorts of pictures of floral displays

“How can I make that at this time of the year?” she asks, because the flowers in the picture are currently out of season.

Also, today’s wire services and telemarketers take a big chunk of the revenue. She says she sometimes turns them down because she cannot make any money or that they call at the last moment on a big holiday such as Valentine’s day.

Cerio’s advice is to call a local florist yourself. They will better know the availability of flowers and you can give them the address and any other special instructions yourself. More importantly you will get more flowers for your money because the florist does not have to pay a middleman. As someone who has held several sales positions I know how important it is to deal directly with the customer – otherwise the middleman becomes the customer. 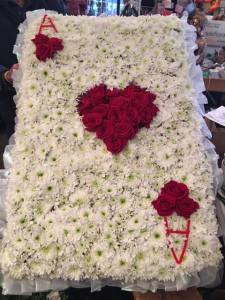 An example of a unique flower arrangement

Jini laments that one of the other big changes she has seen in the flower business over the years is the rise of floral arrangements for children and young adults killed in gun violence. She said she recently did a display for a fifteen year old. “That was never the case when I started,” Jini said.

While I was interviewing Jini, a local lawyer named Clifton came by for a pickup. He told me has used Jini for both his company’s events and for his personal business since 2008. Clifton stated that “she is the best.” He was picking an arrangement to take to a dinner party later.

When my aunt died five years ago I had Jini do a casket spray and other arrangements. I was very happy with her work.

With Valentine’s day coming up Jini’s advice is to use a local florist, whether it be in Rochester, Geneva, Canandaigua, Corning or Syracuse. Not only will you get a better deal but the money will stay within the community.

She also recommends calling the florist a few days before if you can. When she started people used to call three to five days in advance. Now sometimes people call the day of and are surprised if their order cannot be filled.

Most of all she says develop a relationship with your florist or any other local business person for that matter. That way you will get more for your money and some help if you are ever in a pinch.

Markowitz Florist is located at 212 S. Warren Street, Syracuse. Their phone is 315-474-5346. Visit their website at markowitzflorists.com

Madis Senner is an author who lives in Syracuse. You can read his musings at motherearthprayers.blogspot.com. His latest book is Sacred Sites in North Star Country: Places in Greater New York State (PA,OH,NJ,CT,MA,VT,ONT) That Changed the World. It is available at Books, ETC. in Macedon (facebook.com/booksetcmacedon).