It took a former railroad worker over 10 years to acquire and renovate a 45-year-old caboose – likely saving it from the scrap heap in the process. Now, along with two large boxcars, the caboose is located in a small public park just off Route 21N, recalling the remarkable railroad history of the villages of Manchester and Shortsville.

Until the early 20th century, the park, now the Manchester Railroad Park, was the site of a Lehigh Valley Railroad (LVRR) station, a bunkhouse for rail workers, and a popular local eatery. The LVRR stretched from New York City through New Jersey and Pennsylvania and into the Southern Tier, Finger Lakes, and Niagara Regions of Upstate New York.

“Anything that broke, we had to fix,” recalls Michael Buttaccio, a “car knocker” on railroads for nearly 40 years, charged with inspecting and repairing rail cars. He credits his father-in-law, Isaac (Ike) Moses, for his railroad career. Buttaccio, now a Manchester Village public official, struck the deal with CSX for the successful acquisition of the dilapidated caboose, a railroad car which is now almost obsolete. The hand signals formerly used between the brakeman in the caboose and the engineer in the locomotive at the  front of the train have been replaced by radio telemetry transmitters, explains Buttaccio.

The 35-ton caboose arrived in Manchester in 2011 via the Finger Lakes Railway, which has held the lease to operate in Ontario County since 2007.  It took 12 moves by a crane to remove the caboose from the track. Months of renovations, including replacing blown-out windows and eliminating the buildup of rust and peeling paint, required countless volunteers and donations. “Cornell Red” was selected as the exterior color, based on its use by the LVRR.

Historic black and white photographs feature workers in the Manchester Yard, such as the father and grandfather of Doug Parmalee of Shortsville, a third-generation engineer. Parmalee’s railroad career spanned 42 years, 10 of them on the LVRR.
After years of observing his dad on the job, Parmalee’s dream to work on the railroad came true when he was hired in the summer of 1960. “I loved it – we were like one big family,” he says.  A signal mast was donated to the project by Parmalee and his wife Carol, in memory of his father.

Thanks to local Eagle Scouts, the park has benches and a flag pole with the insignia of the Black Diamond, LVRR’s premier passenger train, at the base of the pole. Future plans include a park sign and improvements to the boxcar interiors. Local amateur historian and retired teacher Tim Munn has been working with Buttaccio and Parmalee and hopes to add individual memorial displays inside the boxcars. Listening to the local rail workers’ stories and interviewing their family members are Munn’s passions. He has authored books on local railroad and baseball history, as well as the script for a YouTube video capturing the dynamism of the LVRR, the Manchester Yard, and the people whose lives revolved around it.

Not far from the park are remains of the Manchester Yard, once the world’s largest division point and car classification yard. An estimated 100 freight cars were fixed and refueled there daily. Freight was exchanged and train cars switched from track to track. The Manchester Yard employed over 900 people during its heyday. Still standing are the remains of a 30-bay roundhouse and turntable built in 1916. The coal dock, switch tower, and transfer house have been destroyed or lost.

Doug Parmalee hated to watch the gradual demise of the Manchester Yard in the 1970s.

By the end of the decade, the pending abandonment of the Lehigh Valley Line between Victor and Shortsville led Ontario County to step in and acquire the line to maintain freight rail service to businesses along the corridor now operated by Finger Lakes Railway. The Manchester Roundhouse was finally abandoned and has been off the tax rolls since 1992. The environmental liability for the site’s cleanup from years of use as a diesel fueling station has been the major obstacle for any public or private entity to take ownership. Parmalee and others would love to see the yard cleaned up and used by the Finger Lakes Railway, with some space designated for a museum. 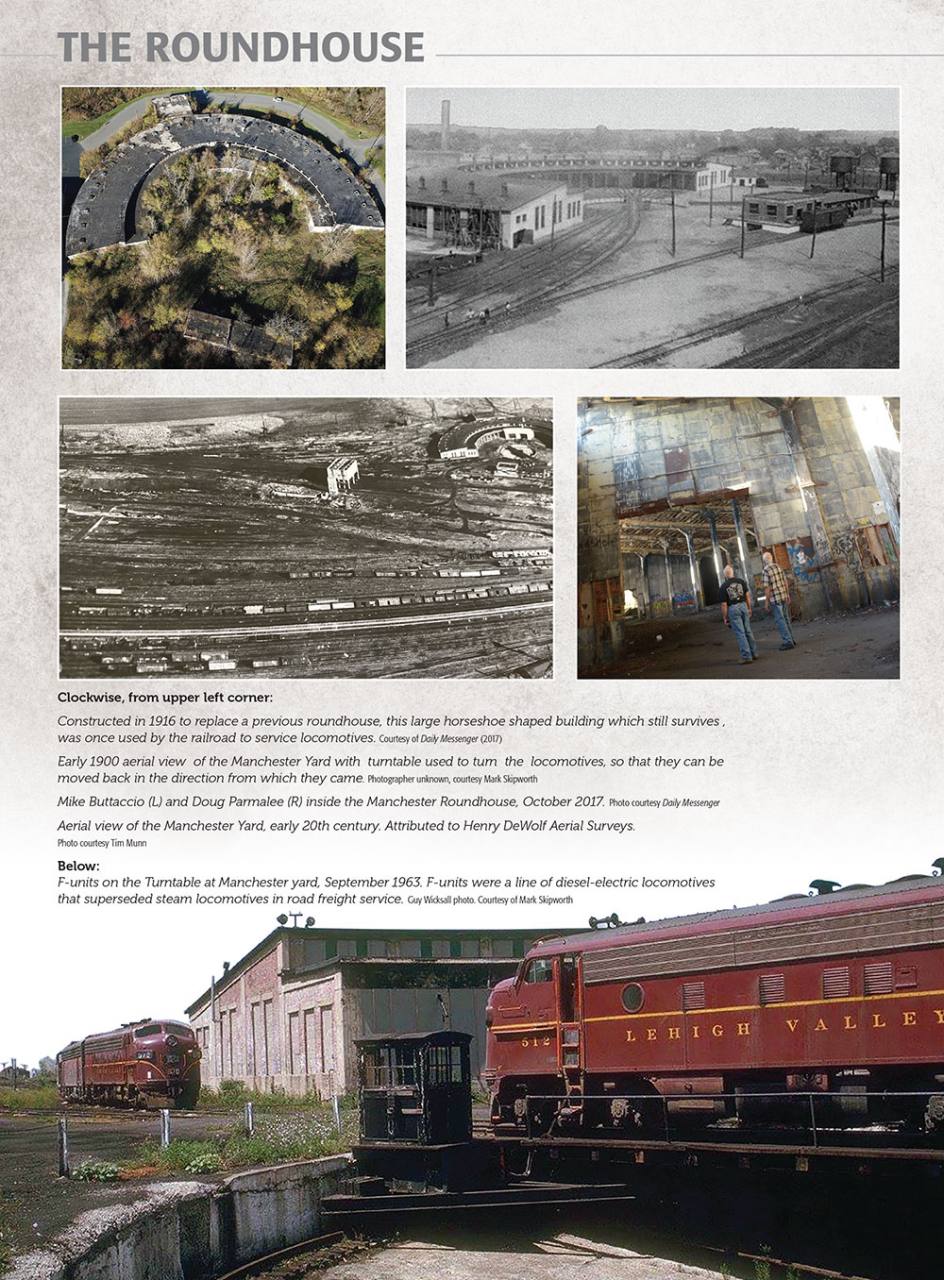 “A highly significant and rare building type, with potential for future redevelopment” is how the LVRR Roundhouse was described in 2017 by the Landmark Society of Western New York when the preservation group named the roundhouse to its Five to Revive list. In 2018, the Preservation League of New York State called the roundhouse “a pivotal piece of transportation history in Western New York,” naming the property to their Seven to Save list.

“Everyone else calls this ‘a gem,’” says Joel Richter, President of the Friends of the Railroad, a volunteer non-profit organization based in Victor with a mission of education and preservation of local railroad history. Due to the presence of hazardous materials and unstable structural conditions, the Manchester roundhouse is not open to visitors. Richter is among those stressing the economic reasons for preserving the rare site. Only one other roundhouse of comparable size east of the Mississippi survives in the North Carolina Museum of Transportation. “Their roundhouse was in as bad shape,” says Richter.

In 2015, a joint effort was mounted by Ontario County; the Villages of Manchester, Shortsville, and Clifton Springs; the Town of Manchester; and Finger Lakes Railway to prepare a freight rail development plan for the seven-mile corridor in the Town of Manchester. Completed in 2018, redevelopment of the Manchester Yard and addressing the roundhouse’s environmental issues were key action items. An implementation team now tackles this complicated project. “We’re making progress by taking one step at a time,” says Maria Rudzinski, senior planner with Ontario County and a member of the project team. In 2019, the roundhouse parcels were cleared and a Phase 1 and 2 Environmental Site Assessment completed, with a US EPA Targeted Brownfield Assessment Grant procured by the county that documented the site’s contamination and cleanup needs.

In partnership with the Town and Village of Manchester, Ontario County was awarded two NYS Empire State Development grants to undertake the first two phases of the Manchester Yard Site Redevelopment Plan. Phase 1, currently underway, looks at the yard’s infrastructure needs. Phase 2, scheduled to begin in 2020, involves a building condition assessment of the roundhouse to assess its potential for reuse. A grant from the Rochester Area Community Foundation’s Klos Historic Preservation Fund is an important contributor to Phase 2. The project start has been delayed due to the COVID pandemic, but is expected to begin in the fall. Next steps will be guided by the results of these studies.

“The trains went by 24/7,” recalls Jack Tuttle, a trustee in charge of collections at the LVRRHS Museum. The trains traveled through the village of Manchester near the Tuttle home, located just east of the Manchester Yard. Tuttle’s father, Bob, a “hostler,” worked in the oil house, servicing all Lehigh Valley railroad locomotives. Young Jack’s job was to sweep out the huge yard engines used to move the other cars around.

The LVRRH Society was formed in the 1990s after Roger Halderman and others created a special railroad display to mark Manchester’s centennial. Halderman’s wife Emma had the business background needed to develop society policies and apply for 501(c)(3) non-profit status; the village hall provided storage and a small display area. In 2001, a New York Central Railroad freight depot in Shortsville became the historical society’s permanent headquarters and a museum dedicated to preserving the memory of the LVRR. The public now can see numerous rare artifacts like the brass bell that once signaled when the steam locomotive was arriving or leaving the station. The museum’s “premier item” is steam locomotive Number 2090’s headlight. Visitors can also enjoy watching a tiny N scale model train.

“Hard work” is how a railroad worker described his job; one of numerous memories captured in a thick binder. “Visitors come in with their railroad stories,” says Deb Halderman, the society‘s treasurer. Like Tuttle, Halderman and her brother David, president of the LVRRHS board, take pride in their family’s deep railroad roots. Their grandfather, Gus Halderman, had a 30-year railroad career, first as a fireman and later as an engineer. His blue and white striped work coat is now a museum artifact, donated like many of the other objects on display.

If a visit to the dining car in a passenger train isn’t feasible, the next best thing is a meal at the Depot 25 Restaurant, a circa-1910 New York Central Railroad passenger depot in Shortsville, owned by David and Connie Liberty. Depot 25 is a haven not just for diners, but for train and local history buffs. After 40 years, the most popular offering remains chicken and biscuits, available on Sundays, says Liberty. It’s located at 15 West Main Street and is open from 4 to 10 p.m., Wednesday through Sunday. Call 585-289-3600 for information.

Manchester was home to the champion Manchester Railroaders baseball team. Liberty, whose great-grandfather worked on the railroad, is always adding to a large collection of original photographs, art, and illustrations at the depot that are linked to the railroad and baseball past of the area.

Both the LVRRHS and the Friends of the Railroad sponsor excursions with Finger Lakes Railway.

Friends of the Railroad
www.friendsoftherailroad.org

Back in 2000, Stuart and Dianne McKnight from Castleton-on-Hudson, south of Albany, decided to spend a long weekend visiting the Finger Lakes. When they…