This year marks the 100-year milestone of the ratification of the 19th Amendment to the U.S. Constitution, granting women the right to vote. Our book reviews lead off with one documenting the long journey to women’s suffrage. Other selections range from fictional mystery and romance to true-life memoirs and historical tales. We even offer an outdoor challenge. Read on! 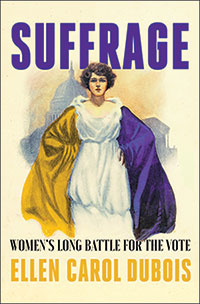 The long campaign to adopt the 19th Amendment was achieved in August of 1920. Those women who led the battle for women’s suffrage – Susan B. Anthony, Elizabeth Cady Stanton, Matilda Joslyn Gage, Sojourner Truth, Ida B. Wells, Carrie Chapman Catt, Victoria Woodhull, and Alice Paul – along with less familiar leaders, are chronicled in this engrossing, accessible, and carefully documented resource.

The struggle began in Seneca Falls with the Women’s Rights Convention of 1848. But it was not until nearly 75 years later, after Anthony, Stanton, and others had passed, that Tennessee became the necessary 36th and last state to ratify the amendment. The book shows how new generations of suffragists continually adapted to changing circumstances to reach their goal. Numerous organizations were formed and alliances forged or dissolved. The movement’s links to the abolition of slavery and temperance, along with the rights of black women, are critical to the narrative.

Ellen Carol DuBois is a distinguished research professor in the history department of UCLA and author of numerous books on the history of women’s suffrage in America. She is coauthor with Lynn Dumenil of the highly regarded text Through Women’s Eyes: An American History with Documents. 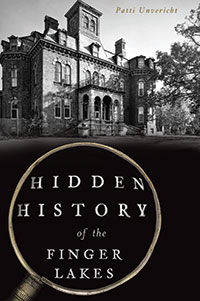 Whether you have visited the Finger Lakes only briefly or lived in the region your entire life, the topics in these 20 short essays are bound to spark new interest in the area’s past. The assortment includes the Castle on the Hill in Dansville that once offered a “water cure.” There are biographies like daredevil Sam Patch, who plunged into the churning waters of Niagara Falls. Ever wonder what happened to early lake steamers when they were no longer fit to ply the waters? The answers are sometimes hidden from view.

Orphanages, asylums, and POW camps – all part of the Finger Lakes’ past – are featured. Their very existence becomes less familiar with the passage of time. The narratives are clear and concise, providing sources should further research appeal to a reader. Black and white illustrations add interest.

Patti Unvericht-Giglio, a lifelong resident of the Finger Lakes area, is currently working on projects related to Mt. Hope Cemetery. Other books include Ghosts and Hauntings of the Finger Lakes (2012); The Great Lakes Seaway Trail: History, Legends and Mysteries (2019); The Silver Lake Institute (2019) and Tales From These Old Bones (2019). Her history column appears in Rochester’s South Wedge newspaper, The Wedge. 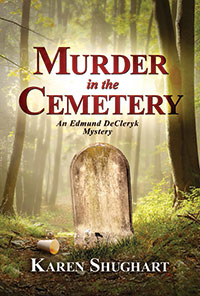 Lighthouse Cove, a fictional scenic community on the southern shore of Lake Ontario, is surrounded by beautiful scenery, charming cottages, and historic homes. This peaceful setting becomes the scene of another horrific crime in the second book in the Edmund DeCleryk mystery series.

Retired police chief Ed DeCleryk is recruited to investigate the tragic death of his friend, a respected member of the community found murdered in a cemetery where casualties from the War of 1812 are buried. Readers of Murder in the Museum, the first in this series, will again be kept guessing as DeCleryk investigates numerous suspects. Why did the victim call DeCleryk’s wife, Annie, the director of the museum and historical society, about something he found in the cemetery prior to his death?

History lovers will enjoy how historical figures from the War of 1812 are woven into the plot. And if crime-solving whets your appetite, a section at book’s end offers some of Annie’s favorite recipes.

Karen Shughart has been a journalist, writer, editor, publicist, and non-profit executive. She authored two non-fiction books; this is her second novel. Her next mystery is linked to the abolition movement and the Underground Railroad prior to the Civil War. 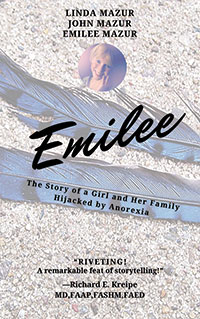 Emilee – The Story of a Girl and Her Family Hijacked by Anorexia
Linda, John and Emilee Mazur
Jaclin Press
emileethestoryofagirl.weebly.com
2019

This memoir is a poignant testament to a talented woman whose promising life was cruelly cut short. The Mazurs’ recollections of their daughter Emilee explore a depth of feelings, from joy when their blue-eyed, blonde baby girl was born, to the despair they faced 35 years later when she lost her battle with an eating disorder, mental illness, and addiction.

While Emilee faced disappointments, she excelled in high school and college before becoming a pharmacist. Linda’s and John’s reminiscences, written separately, reveal how each dealt with Emilee’s diagnosis of anorexia nervosa. Eventually, medical emergencies and inpatient treatments were limited by the failure of insurance to cover the costs. The stress and helplessness felt by this courageous suburban Rochester family is palpable.

Emilee wanted her story told, and readers will be moved by some of her writings. Her parents’ compelling account has already been recognized by medical professionals and educators. The book is included in the curriculum of a graduate course in the department of health and behavior studies at Teachers College, Columbia University. 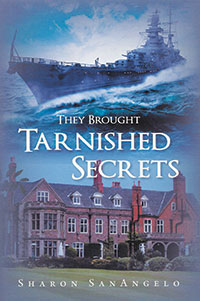 Post-World War II Europe is the backdrop for this fictional work based on real life experiences of three generations of one family and their struggles to survive. During the war the family was forced to leave their home in a small Croatia village in Southeast Europe. Seeking safety from the conflict and its aftermath, they endured the harsh realities of living in a relocation camp. After years of this very bleak existence, rather than return to their homeland, they were fortunate to resettle in America. Although painful to leave behind their memories, the Finger Lakes region offered them a new beginning.

Much of the story relates how the young sisters Mirjana and Maria grew up in unbearable confinement. Their experiences are expressed with youthful candor and poignancy. The author’s writing style is descriptive yet uncomplicated. While it deals with some adult situations, the book would be appropriate for teens as well as adults.

This forceful story is focused on the actual circumstances of one family. These were shared by a surviving member with Sharon SanAngelo, a retired nurse and resident of Newark, NY where she is involved with promoting literacy. She previously published The Lightning Within, a non-fiction book.. 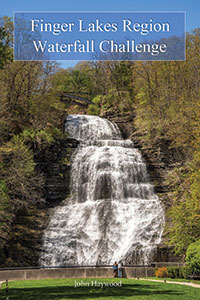 Looking for an incentive to head outdoors? Hundreds of waterfalls throughout the Finger Lakes are accessible. This well-illustrated book offers a selection of over 50 waterfalls across the region. It can be used just for fun as a waterfalls guide, or, with planning, a means to obtain a patch for completing a challenge. Anyone visiting 35 of the waterfalls in the guide can receive an embroidered patch for a small fee. A selfie standing next to five of seven State Park signs must also be submitted via Facebook or email.

The guide offers maps of each county within the region pinpointing waterfalls’ locations. Websites, GPS coordinates for both the falls and parking, when available, along with photographs help to identify the correct falls. Pointers for taking photographs of the scenery are provided along with tips for a safe waterfalls hike.

John Haywood, the Adirondack Ambassador for Dig the Falls (www.digthefalls.com), is an avid hiker, author, and photographer.  His guides to other waterfalls include: Hudson Valley Waterfall Challenge, NYS Waterfall Guide, and Family-Friendly Waterfall Hikes in the Adirondacks. With Russell Dunn, Haywood co-authored Adirondack Fifty Falls Challenge and 3D books on Ausable Chasm and Natural Stone Bridge and Caves Park. 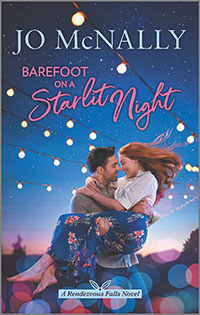 Rendezvous Falls, a fictional small town on the western shore of Seneca Lake, becomes the charming setting for a turbulent relationship between Bridget McKinnon, the proprietor of an Irish-themed pub, and Finn O’Hearn, a newly hired professor at a nearby college. This novel typifies a “seasoned” contemporary romance with characters in their thirties, forties and up. The couple meets when Finn rents an apartment in Bridget’s home.

The Irish-born academic, desperate for job security and to permanently remain in the country, fabricates his engagement to the spirited bar owner without her knowledge. The falsehood is fraught with unintended consequences, often humorous. The pair initially spars privately while publicly carrying on a romantic charade deceiving their friends and Bridget’s large family. Her ailing grandmother, “Nana” McKinnon and her book club friends are eager matchmakers anxious for a wedding. What is uncertain is whether Bridget and Finn, having experienced betrayal in their earlier relationships, will realize lasting true love.

Jo McNally, a former corporate executive and award-winning author, lives in upstate New York. This is the third in her Rendezvous Falls series which each feature a different couple. The feisty book club characters, and couples from previous books, appear in other titles. 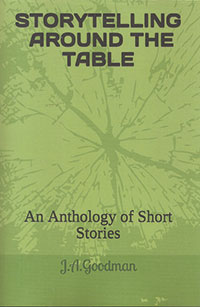 Reading and writing, often done in isolation, can flourish in group settings like book clubs and writing classes.

In 2018, the ‘Express Yourself in Writing’ class offered by the Osher Lifelong Learning Center at Rochester Institute of Technology published its own book of short stories written by eleven class members. Authors ranged in age from mid-50s to their 90s and, as indicated in their short biographies, their backgrounds are widely varied. Together they picked the 31 stories by their classmates to include in the publication.

“I presented this as a way to be able to tell people that they were now officially published authors,” explains Judith Goodman, a classmate and anthology coordinator, who has published four books of her own.

Story plots are often fictional with some based on actual events. From ghosts and spirits to aliens, readers meet entertaining and even dangerous characters. The raconteurs skillfully craft small happenings into memorable tales – like a chance meeting at a Thruway rest stop, a prom date which turns awkward, or a homeowner stranded on his roof while clearing snow.

The storytellers have taken pleasure at seeing their stories published and will likely continue writing as an outlet for creativity. 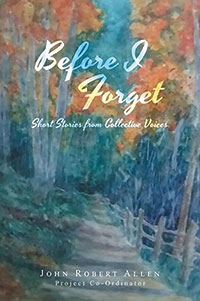 The previous title, Storytelling Around the Table, inspired John Robert Allen to coordinate the publishing of this collection of memoirs, poetry, fiction, and biography by individuals over the age of 55. Writing classes which he teaches in the Canandaigua area yielded some of the authors. It was an opportunity for his students to see their words in print, perhaps for the first time, while other contributors had already had works published.

Many of the 25 stories are based on life experiences while others are fictional. This is a delightful blend of recollections such as a visit to Chicago and its sights, a long walk back to the family’s Keuka Lake cottage, trips and friendships made in Barbados with her spouse, and tales of horseback riding adventures prompted by a teenage crush. Writing can be the vehicle for healing, pleasure of days gone by, or humor with life’s happenings that can be transformed onto paper, according to Allen.

Before I Forget took less than six months from beginning to its completion at the end of October 2019, with everyone donating equal funds toward its publication.

by Morton Hochstein One day recently, I served a bottle of Sweet Walter white wine to guests. I was surprised when no one at…