For dozens of Syracuse area youth and young adults, it’s a daily routine – barked instructions, sparring in the ring, steady jabs at the heavy and speed bags, exercises on the mat. A bell rings. Each group hustles to the next station … sweating, no delays, few words, focus always the key. Along Geddes Street on the city’s gritty southwest side, the WAA-EC is indeed a busy place. 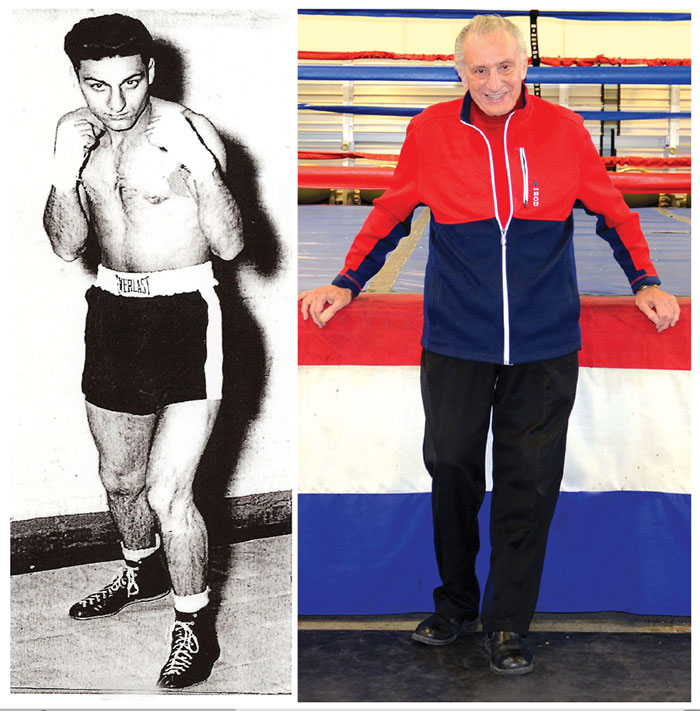 The WAA-EC …what’s that? The “WA” stands for “West Area,” the next “A” for “athletic,” and the “EC” for “education center.” The blending of the last two parts of the name is a mission that 90-year old Ray Rinaldi took on many decades ago. Heart and soul of the operation, Ray as a young man began to use his love for boxing as a means to better the lives of area youth, to lure them off the “mean streets” and into a positive, disciplined environment.

Looking forward to our chat, I came prepared with a list of questions, but quickly realized that Ray’s passion for what he’s done, and continues to do, would carry the conversation. Fascinated and scribbling notes, I sat back and listened as he told the story.

I grew up in an ethnic neighborhood and got in my share of scraps. One day, an older brother took me to a boxing gym on North Salina Street and said, “Here, go at it.” That was the start – I took out my aggravations, got in shape, and loved the discipline of the sport. Sure, I had dreams of one day becoming a professional, but that was short-circuited… I was hit by a car and sustained a serious head injury.

Ray took his love of boxing with him into the army in 1954, where he established himself as a trainer and head coach of the 4th Infantry Division’s boxing team. Success followed – a number of Ray’s men became top-ranked amateurs, and some did well as professionals.

Returning home, he reunited with family and found steady employment. Training and instruction resumed around town, but all the while Ray nurtured a dream of one day owning a facility where at-risk youth could both learn to box and receive needed services.

I believe – I’ve always believed – that boxing can be a road to success for anyone. Kids can have too much time on their hands, and it’s time often spent in negative situations. Early on, I worked with kids in the basement of my home, using the bags, sparring, etc. My wife finally stepped in. “Enough! The house is shaking – too much noise and dust.”

I continued to work out and teach at available gyms, anywhere we could find space. But we needed a permanent place where frustrations and bad behavior could be turned around and kids could find a different pathway – maybe even one with life-changing results. It had worked for me. Why not for others?

Ray took a major step in that direction in 1994 when he purchased a condemned building on Syracuse’s North Side. Rallying community support to his cause, his dream became reality when the center opened its doors to area youth with a variety of needs. Word of the center’s success spread – people “answered the bell” and local media took notice. Encouraged, Ray purchased and established a second facility on Geddes Street in 2005, and the two gyms eventually consolidated at that Westside location.

The goal was to provide a safe haven from troubled neighborhoods and an array of problems – truancy, unstable home situations, social behaviors, drugs, on and on. The centers helped solve those problems. School staff, parents, friends, even justice system officials pushed troubled youth, both boys and girls, in our direction.

Ray sees his deep-rooted devotion to boxing as the key that’s opened the door for thousands of “Ray’s Kidz” who have benefitted from his programs. For Ray, the demands of the sport bring with them much more than just physical skills and conditioning. Evidence of that is everywhere: boxers tap gloves before and after sparring, encourage one another throughout tedious drills, and chat intensely with their coaches. The center provides space for homework and studies, G.E.D. classes, computer access, and counseling. Everything is designed to change attitudes.

It’s what I know, and you use what you know to accomplish things. Self-respect, diligence, time management, respect for others … these are values often missing in their lives, values that once established can make all the difference. We’re very proud that so many have moved on to successful and productive lives – business, professional careers, teachers, social workers – just better people. Without a disciplined foundation established with time spent here … well, who knows?

Ray can be a taskmaster, tough and demanding. He puts up with nothing that might interfere with the ultimate goals. Yet, he knows how to mix criticism with earned praise. He can deliver an icy stare or have a twinkle in his eye, traits he’s passed on to those who have worked with him over the years.

Former students continue to support the center, both financially and with their time.

Chris Burns is one of them. Now a devoted instructor and mentor, “Coach Chris” came to Ray as an angry youth many years ago.

I quickly learned from Ray that one of his posted rules, “No Four-letter Words,” meant more than just the usual profanity. In everything he taught and stressed, it also meant words like “Can’t” and “Quit” were unacceptable. Over time, I formed a special bond with my coach – very special to me, but not unique to him. What Ray did for me he’s done for thousands of others in and around Syracuse. He believes everyone, in some way, should put stock in our youth.

They arrive at Ray’s doorstep for countless reasons. Many box for conditioning and self-improvement. In time some step up to competition – tournaments, Golden Gloves, etc. Others never compete beyond in-house sparring. But through Ray’s programs, those who face the challenge eventually move on with something much more valuable than just skill in the sport.

Numerous awards have come Rinaldi’s way, from boxing organizations, communities, service clubs. While he appreciates the recognition, he insists any awards really belong to kids – those who have labored to succeed. With a smile and some dry humor, Ray summed up the situation in simple terms.

I know boxing, so that’s just the hook to get kids who need it into the program. If I knew crocheting, we’d have a supply of yarn and needles. If I knew ballet, we’d have a closet full of tutus. Boxing is our means to a critical end – changing attitudes from the negative to the positive. When I’m gone, I’d like to think that legacy will continue.

The New York Jets have landed in Cortland, and the road to the Super Bowl might just pass through the Finger Lakes! For the…