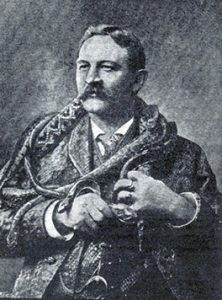 Peter Gruber never met a snake he didn’t like. From the time he was a boy he was fascinated by them. The wooded area where his family lived in Pennsylvania in the 1800s was his playground, with snakes aplenty. His fixation with the reptiles continued throughout his life and earned him the name “Rattlesnake Pete.” The moniker fit him like a snake’s skin and made him famous.

His first real contact with snakes came when he and his friend Doc were out tramping in the woods, and saw an Indian woman dragging a large rattlesnake. The boys were in awe. When she told them she would make medicine out of it and asked if they wanted the skin, not a second went by before Pete answered, “You bet!” From then on he was hooked and he was determined to learn everything he could about rattlesnakes.

Shortly after that, Pete and Doc set out on their first snake hunt. They thought they had taken plenty of precautions to keep from being bitten, but unfortunately, they thought wrong. Sure enough, when Pete clumsily grabbed a small snake, it bit him on the thumb. The spotted adder wasn’t poisonous, though Pete didn’t know that. Scared but thrilled, he took the snake home and displayed it in his father’s restaurant. “I was never without ‘em after that,” he said.

Thanks to that first encounter with the Indian woman, Pete was able to make friends with the Cornplanter Indians who lived in the area. Their medicine men taught him all the snake lore they knew: the many uses of snake oil as medical cures and how the most potent medicine came from rattlers. They even told him where there was a den of rattlesnakes in a place called Pit Hole, and Pete couldn’t wait to organize a hunting party. This time he was equipped with the right protection against bites. He wore gum boots, and carried a bag to put the snakes in, along with a slender stick a yard long with a forked tip. The stick was used to pin down the snake’s head to hold it still. Once pinned, Pete would grab it at the back of its neck with his bare hands.

The hunt that day yielded four large rattlers, which he added to the box with the small adder. Word spread quickly and folks began going to the restaurant just to see the snakes. It wasn’t long before people also came to have Pete fix their earaches, rheumatism and other ailments with his snake oils. His dad’s restaurant business suddenly got as lively as the snakes!

As the oldest of nine children, it was Pete’s duty to help with the tavern, but his dream was to build a museum dedicated to snakes. During the 14 years that he worked in the restaurant, he continued to hone his snake skills, often organizing snake hunts. One was a whopper.

Pete, a bunch of his friends and a New York City newspaperman drove a wagon and team of horses along the Allegheny River for an all-day hunt in the hills, with great success. Twelve snakes were caught and put into a large wooden box. But the bumpy roads loosened the clasp on the box and all the snakes got loose. The men hastily scrambled out of the wagon, except for the skittish reporter who jumped onto one of the horses. Pete wasn’t about to let a day’s work slip through his fingers, and recovered all of the snakes single-handed. As for that reporter, you can bet he wrote one thriller of a story.

When his dad sold the restaurant, Pete finally had the opportunity to follow his dream – opening a saloon and museum of curiosities, with snakes as the leading attraction. He was 34, married and a father when he set out. It took a while for him to find a home for his idea, as neither Pittsburgh nor Buffalo would allow him to run both a saloon and museum together.

But Rochester would, and in 1890 he moved there. It wasn’t long before flocks of people came on foot, by train and by boat to see the fascinating attractions at 8 Mill Street, along the Genesee River. A sign over the doorway lit up at night with the words: RATTLESNAKE PETE. No other advertising was needed.

The museum was actually a penny arcade filled with mechanical curios, oddities of nature, and of course, snakes. One attraction was an electric trick machine that shot out a padded fist when a coin was dropped in the slot. Pete had a devilish sense of humor. His most prized item was a gigantic stuffed horse that originally weighed more than a ton and a half. Other displays featured a two-headed pig, an Egyptian mummy, jars of pickled brains, relics from famous outlaws, the first electric chair, Indian Chief Sitting Bull’s war club, hundreds of arrowheads and, of course, tanks of writhing snakes. Plus, there were all kinds of items made from rattlesnake skins including purses, canes, umbrella handles and neckties. The museum remained in operation for more than 40 years.

Not only did Pete live and breathe snakes, he wore them as well – their skins, that is. He sported a suit, vest and shoes made from more than 200 rattlesnake skins. The buttons were made from rattlesnake rattles and his stickpin was a 1-inch-long rattlesnake fang set in gold. Pete carried a cane with a gold rattlesnake head. The final touch was a big gold ring in the form of a coiled serpent with ruby eyes.

Tall with a bushy mustache, he cut a striking figure, especially when he drove his custom-designed red Rambler around town. The car itself was a spectacle. One side was embellished with snakes while the other side featured a 6-foot klaxon horn shaped like a gaping snake’s head.

Pete loved one thing almost as much as snakes – dogs. St. Bernard dogs. He always had two or three of them, and they were his constant companions, even sitting on the running boards of his car, both sides. You can imagine why traffic stopped when Pete and his dogs drove through town.

His snakebite remedy was one he learned from the Indians and it saved many lives, including his own. As skilled and experienced as he was in handling snakes, he still got bit: 29 times by rattlers and four times by copperheads, and he had the scars to prove it.

Only one time was he unable to treat himself. Folks used to say that when a rattler got mad, it was just half-a-degree slower than lightning, and that time it was true. Pete was unpacking a crate of rattlers sent from Florida when a four-foot Diamondback struck his right wrist, hitting a large artery. He immediately passed out. Afterward he claimed, “The floor just came up and hit me.”

He was unconscious for nine hours, in the hospital for 10 days, and weakened by the venom’s effect for more than nine months. Do you think that near-death experience changed Pete’s mind about snakes? Not one bite.

His ability to cure blood poisoning was widely known, and Pete often traveled hundreds of miles to treat victims. One such case made him famous. The popular Bostock Circus was performing in Coney Island in 1903 when a near fatal accident happened. The star clown, Phoebe Powers, had been bitten by a copperhead, sending him to the hospital on the verge of death. The owner of the circus had read about Pete in newspapers and since time was crucial, he arranged for a special train and a relay of cabs to get Pete to the hospital in record time.

There, he saw a man swollen to a monstrous size. His neck and facial features were stretched so badly that they seemed to have disappeared. Phoebe was so far gone that Pete knew his regular treatment wouldn’t work. Instead, he came up with a new idea, and it worked. He fed the clown pail after pail of milk, causing Phoebe to throw up – all day and night. The milk absorbed the poison and his vomiting ejected it. It took five days until the clown was out of danger. Grateful to be alive, Phoebe sent Pete a tiger’s claw rimmed with gold and set with diamonds. It was engraved, “To the Rattlesnake King from the Animal King.” Pete proudly wore it from then on as a watch charm.

Pete’s fame spread far and wide. Once a man sent a postcard from France with Pete’s photo on the front and simply addressed: “USA America.” The card reached him.

He died in 1932, but without a doubt, his daring deeds made him a legend known as the Rattlesnake King.

Julie has loved stories all her life. She ‘discovered’ Pete when she was a children’s librarian in the Monroe County Library System. Unlike Pete, she does not love snakes. Julie resides in Canandaigua.