Common themes running through many of these books are the dreams, passions and achievements that individuals have pursued, as well as losses and disappointments they experienced.

From the Finger Lakes: A Memoir Anthology 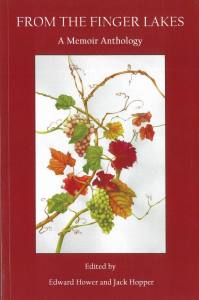 More than 80 authors with strong ties to the Finger Lakes Region are featured in this collection of memoirs. Cayuga Lake Books, an Ithaca-based press, has published works by many upstate New Yorkers for 10 years. This, the press’s third anthology, contains prose and poetry remembrances mostly rooted in the Finger Lakes, with some originating further afield in Alaska, Cambodia and Spain.

Wide-ranging topics, from love of nature to personal hardships revisited, will kindle a reader’s own memories. Lighter themes include “A Fool for Pasta Fazool” by fiction author Susan Kenney, relating a bride’s attempts to master Italian cooking. “Clink,” contributed by Edward Hower, author of 11 books of fiction and a collection of memoir essays, recalls how youngsters reacted to the departure of a beloved teacher. Jack Hopper, a former Tompkins County poet laureate, offers “Letting Go,” expressing the freedom of swinging on a rope over a creek. Poet and novelist Peter Fortunato’s “What’s missing” recalls lost mementoes including a novel written when he was 10. “Eco-Logic” by Mary Gilliland, a recognized writer of fiction and poetry, tells of protecting her home and nature from a hazardous solvent leak. And there are many more works to enjoy.

Details about the writers, often including websites and email addresses, are found in a Contributors’ Notes section.

Gator, short for navigator, refers to the back-seat position behind a pilot in a fighter-bomber. Norvell, an Air Force pilot and navigator during the Vietnam War, shares his family’s military background and the training that prepared him to fly 42 combat missions in an F-4 Phantom II jet over Cambodia. Surviving letters written to his wife during the war provide details and context. While the serious nature of war is apparent, Norvell employs self-deprecating humor to lighten the narrative.

This clearly written memoir is a story of duty and dedication. It includes Norvell’s post-war Air Force assignment at remote sites in Alaska providing “Top Cover” alert against Soviet aircraft incursions. Back in the Lower 48, he taught at the U.S. Air Force Academy. Years later, after seeing a restored F-4 Phantom II cockpit assembled by Dave Garbe of Honeoye Falls, Norvell was spurred to write about his career.

A decorated air combat veteran, Norvell worked for the Historian of the U.S. Air Force before retirement. A 1966 graduate of Hobart College, he directed the college’s alumni relations from 1993-2002. David Garbe worked in video production for more than 30 years. The aviation enthusiast is particularly fond of the F-4 Phantom. He has shown his F-4 at air shows. 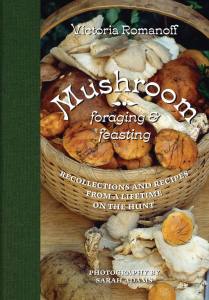 Prepare to enter the world of mushroom hunting. Seasoned mycophiles, or those individuals who love foraging for mushrooms, will delight in this account of lifelong “‘shrooming.” Twelve different mushrooms described as the “most easily forged” are presented, including the chanterelle, the morel and the oyster. Author Romanoff, a native of Latvia, shares her earliest experiences uncovering mushrooms in war-torn Europe. This attractive book draws on her foraging activity over eight decades while living and traveling abroad and in the Finger Lakes. She was once head chef and co-owner of an Ithaca restaurant.

Lush, full-color photographs show each type of mushroom along with views in nature, as well as in a tasty dish. Part memoir, part cookbook, this entertaining book recounts Romanoff’s numerous excursions and the culinary transformation of the hunt’s bounty. There are helpful references to conditions where mushrooms grow, but details of specific locations are limited. A recommended reading list and an index are valuable additions.

Romanoff, an accomplished artist, has been recognized for her work as an architectural preservationist. Photographs taken by her partner, Sarah Adams, have been featured in preservation articles and in this book on the fascinating world of a master forager. 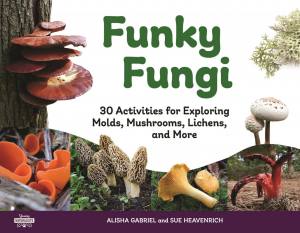 This appealing book is devoted to the ubiquitous presence of fungi in our world. The edition is part of the publisher’s Young Naturalists Series, which provides kid-friendly introductions to zoology and botany for upper elementary and middle-grade readers. The pleasing layout will arouse youngsters’ curiosity, and be enjoyed by adults. Colorful graphics and clear writing explain the value of fungi to people, plants and animals. Thirty hands-on activities are included, such as how to make a FUNgus journal and how to adopt an endangered fungus. “From the Fungus Files” offers numerous examples of fungus facts to stimulate learning.

While the content is not specific to the Finger Lakes, some helpful regional connections include the profile of a mycologist, or someone who studies fungi, at Cornell University. There is also a visit to a Trumansburg farm where mushrooms are grown. The glossary, online resources, teacher’s guide, bibliography and index make this an exceptionally useful resource.

Gabriel is an elementary music teacher and university professor who has written five books for children. Heavenrich is a biologist and teacher whose publications include a science column for Ithaca Child for more than 20 years. She has written six children’s books. 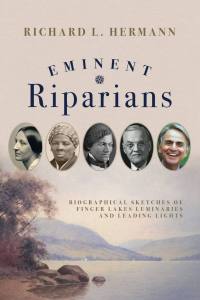 Short biographical sketches of 62 remarkable people with links to the Finger Lakes Region offer readers fresh insight into contributions made by these eminent riparians – outstanding people living in this lake-filled area. Seven categories, from The Iroquois to The Moguls, organize these life stories and provide valuable context. Some figures are the subject of published, full-length biographies, but this book offers concise, well-written summaries of the contributions of these exceptional individuals.

The well-researched book provides a sound introduction to persons linked to this region that represent disciplines from arts to industry. Not all of the luminaries are Finger Lakes natives, but all have a significant connection. In the “Rights Revolutionaries” category, Susan B. Anthony, a New Englander by birth, contributed to the women’s rights movement rooted in the Finger Lakes Region. Other recognizable figures include Red Jacket, Glenn Curtiss and William Seward. Business magnate and philanthropist John D. Rockefeller was born and grew up in the Finger Lakes before his family moved to Ohio. Illustrations and a select biography make the book a useful reference.

Hermann has written 15 books about law and history, including the award-winning Managing Your Legal Career and Encounters: Ten Appointments with History. He has been an entrepreneur and law professor. 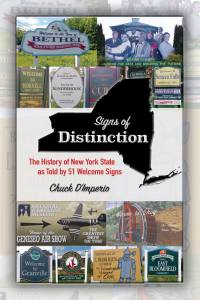 What is your hometown known for? Quite often something or someone associated with a community has achieved significant recognition. One New York State town boasts that it is the “Home of the Northern Spy Apple” (East Bloomfield). Pride in a city, town or village’s unique identity is often shown on the sign greeting the traveler at the main entrance. D’Imperio, a seasoned author-traveler, has gathered his favorite welcome signs in New York State that announce numerous claims to fame. Beneath the “Welcome” and the municipality’s name are such impressive accomplishments as “The Birthplace of Jell-O” (Leroy) or “The Bandstand of the Finger Lakes” (Gorham).

The 51 entries have been selected based on the author’s criterion that the community’s special character really tells something about the town, by providing “some DNA of the place.” From around the state, the author has highlighted communities, accompanied by a photograph of their signs and short, satisfying explanations. This compact guide is filled with discoveries about New York’s local notables, history and activities.

D’Imperio is an award-winning radio broadcaster, author and newspaper columnist in Upstate New York who has written several books that encourage the exploration of all parts of the state. Several were previously reviewed in this magazine. 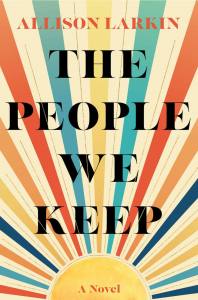 The People We Keep

In this coming-of-age novel set in 1994, 16-year-old April Sawicki is on the verge of dropping out of school. Abandoned by her mother years earlier, she is living in a motorless motorhome, neglected by her father who lives with his new girlfriend. The teenager finds some solace and employment with her father’s ex-girlfriend, the owner of a rural diner. While performing her songs on guitar at a local bar during open mic night, April’s quest for music that nourishes her is reinforced. She escapes the small town, arriving in Ithaca nearly destitute in a “borrowed” car, leaving behind a boyfriend and her troubled home life.

What things in life do you hold onto and what do you let go? These are the questions April faces as she begins trusting others and finds a new love. But to avoid hurting others when her secrets are revealed, she moves on. April’s life becomes nomadic, performing at one gig after another across the country, still searching for a true family. Some new relationships end disastrously, while others endure and offer hope.

Larkin is a bestselling author of the novels Stay, Why Can’t I Be You and Swimming for Sunlight. She is very familiar with Ithaca, having attended Ithaca College for two years.

“I Did It My Way” The Art of A to Z, An Odyssey Thru the Life of Art Zimmer

The exclamation “Wow!” appears often in this memoir, a fitting response to the remarkable life that unfolds on its pages. Art Zimmer, born during a hurricane in 1938, became a force of nature over 80-plus years. Part photo album and part scrapbook, the book is filled with personal recollections and tributes chronicling the unusual life of a leading citizen of Central New York.  Zimmer’s first book, Making It Count: From A to Z, the Life and Times of Art Zimmer, saw a second edition, and is now available on Kindle.

The title of this memoir, “I Did It My Way,” a reference to the well-known song, expresses Zimmer’s approach to life. His beginnings were hardly auspicious. In a candid, conversational style, he reveals how he grew up on a farm near Hamilton and almost didn’t graduate high school, but became an Eagle Scout. After serving three years in the Army, Zimmer arrived in Syracuse. Through hard work and doing things “differently,” he succeeded in owning and operating the Syracuse New-Times, hotels in Vermont, the Zimmer Neo-Classic Car Company and rental properties, among other enterprises. His life story shows how this self-made businessman’s skills carried over to many philanthropic activities. Readers are bound to be impressed and inspired. 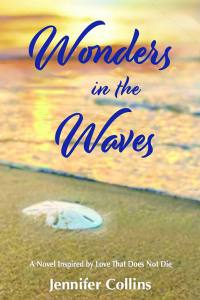 Who doesn’t enjoy a sequel or a prequel?

Wonders in the Waves

Collins’ second novel follows her Comfort in the Wings, reviewed here in the May/June 2022 issue. Readers who cried with Larissa Whitcomb after her painful losses are invited to continue her journey as she finds hopefulness after grief and discovers joy in everyday wonders. The settings of both books are near water – the Finger Lakes and the Indian River Lagoon – and special because of their unique geographical qualities and importance in the author’s life. 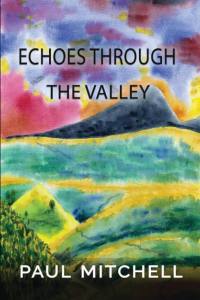 Echoes Through The Valley

This is a story of hard choices made, and of the terrible consequences that can grieve multiple generations. A prequel to Mitchell’s Mountains Can Move, reviewed here in the May/June 2021 issue, it traces the early lives of Randall Johnson’s family. Echoes Through The Valley chronicles stories of love and family, exploring the deep bond between humans, nature and the divine as one family triumphs over human weakness and fear.

10/17/2019 The Finger Lakes are famous for expansive farmland and picturesque lake views. The bountiful wineries, u-pick orchards, farmer’s markets, and emerging beer and…