Autumn in upstate New York is one of the most exciting times of the year. Leaves turn from deep emerald to fiery orange, migratory birds begin their arduous journey south, and everywhere you look, squirrels, chipmunks, and chickarees scramble and dart among the trees as they stockpile their larders for the winter season.

It’s also the time of year when you’re likely to see one of the region’s quintessential fall inhabitants: Pyrrharctia isabella, known colloquially as the woolly bear. On sunny days in late September and early October, this bristly-looking caterpillar can often be seen shuffling across the road like the head of a miniature two-toned toilet brush magically come to life, pausing only to curl up in its characteristic C-shape when disturbed by passing vehicles (and emitting a pungent, distasteful odor in the process).

While the Finger Lakes are home to innumerable species of insect, the woolly bear – the larval stage of the isabella tiger moth – is singular among the family Erebidae. Dr. Cole Gilbert, Director of Undergraduate Biology and Professor of Entomology at Cornell University, puts it this way: “The banded woolly bear looks unlike any other caterpillar.”

Of Cocoons and Caterpillars

Pyrrharctia isabella is a member of the order Lepidoptera, which includes all butterflies and moths. These organisms are notable in that their lifecycle includes four distinct metamorphic stages: egg, larva, pupa, and adult. While the entirety of butterflies and moths live as caterpillars in the larval stage and winged insects in the adult stage (imago), the isabella tiger moth winters over as a caterpillar and spins a fibrous cocoon in the early spring, as opposed to a chrysalis in the fall.

Wintering over is one survival mechanism employed by many insects in upstate New York, including the woolly bear. They’re equipped with a unique body chemistry that acts as a cryogenic agent, enabling them to withstand severe drops in temperature. “The most common compounds are glycerol and sorbitol, and many insects even produce ethylene glycol,” Gilbert says. “The latter is the same compound that’s found in commercial antifreeze.”

It’s because of this talent for weathering harsh climates that it’s not uncommon to see woolly bears active on mild winter days. This is no small feat. “The problem is related to the unusual property of water,” Gilbert explains. “It expands when it converts from a liquid to a solid. Almost all other substances do the opposite.” Because water comprises most of a caterpillar’s body mass, were the woolly bear to freeze, it would explode from expansion.

A Myriad of Moths

There are almost ten times more species of moth (160,000) than butterfly (17,500) in the world. Because of their numbers, researchers still have much to learn. But what they do know is fascinating.

During the reproductive process, female moths emit pheromones – chemical signals that act as behavior-altering agents in members of the same species. In response, mate-seeking males release a paired glandular structure known as coremata. Gilbert describes this otherworldly apparatus as having the appearance of “two socks” extending from the tip of the male’s abdomen.

These coremata, which are coated in an odiferous compound, signal the male’s readiness to the female. She then produces a sound from an organ known as a tymbal, the tonal quality of which Gilbert likens to a child’s metal clicker toy. It is through this peculiar means of courtship that future generations of isabella tiger moths are ensured.

After emerging from the egg, caterpillars begin feasting in earnest, eventually growing to hundreds of times their original size. As a caterpillar matures, it sheds its skin through a process called molting.

The pupa, or resting stage, is when the woolly bear undergoes its most profound transformation: after spinning a cocoon of silk, it lies dormant for as many as 10 to 15 days before emerging as a winged adult. While many species of butterfly are tied to specific host plants (monarchs, for example, are inextricably linked to milkweed), moths such as the isabella are more generalized feeders.

“Some moth caterpillars, like the woolly bear, have an extremely broad host range,” Gilbert says. “It includes many species of trees, as well as shrubs and flowers.”

It is because of their indiscriminate nature – as well as their inimitable coloration – that woolly bears are so visible. The next time you’re out for a drive on a temperate fall afternoon, be sure to keep an eye out for these quaint native residents.

• When foraging, woolly bears tend to favor herbaceous plants such as goldenrod, dandelion, and clover. The isabella tiger moth feeds exclusively on the nectar from flowers.

• Woolly bears are most susceptible to predation from birds, wasps, and mantises.

• The isabella tiger moth is unique to North America, and is not found on any other continent. It is a medium-sized member of our indigenous moth population, with a maximum wingspan of about two inches.

• Moths are among earth’s most ancient inhabitants, with some fossil records dating back more than 180 million years.

• The word “caterpillar” has its origins in the Latin catta pilosa, which means “hairy cat.”

• While most moths are nocturnal (active at night), some are diurnal (active during the day) or crepuscular (active only at
dawn and dusk).

• The woolly bear’s 13 segments are covered with tubercles – small, rounded projections – from which protrude tiny setae (coarse, wiry hairs). Between the tufts of setae are spiracles (pores), which are actually part of the caterpillar’s respiratory system.

• The stages between a moth’s individual periods of molting are known as instars. 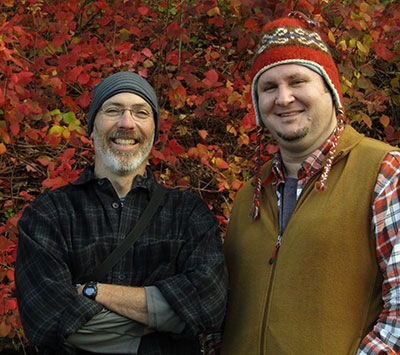 Left to right: Dave and Jon

A Tribute to Jon from his friend Dave Hall

Unfortunately for everyone who has enjoyed Jon’s writing, this will be his final article. I met Jon through my job at Cornell Cooperative Extension, but it was through our writing work that we became friends. We shared a silly sense of humor, a love for hiking, and a curiosity for nature. We shared many trails together, a gearless night in a snow cave, and some amazing concerts. We’d talked about hiking the Northville Placid Trail together; I know that someday I will hike it with my dear friend’s memory in my heart. Jon was a kind person, a good friend, and a caring father. He will be sorely missed.

I have been fortunate to have lived all of my life in the Finger Lakes Region. Home to pristine freshwater lakes, breathtaking waterfalls, streams and…