It seems almost insane to be writing about how the Finger Lakes and Upstate New York Regions will be seeing an influx of people moving here while statistics show that we are still losing residents. Yet I firmly believe in the years ahead our population will grow by leaps and bounds. Why?

While migration patterns on balance are still towards the south and west there are also the beginnings of an undercurrent that runs counter to this trend. People in climate stricken areas in southern parts of the world are moving north.

NBC recently reported that the mass migrations we are seeing at our southern borders are the result of an extended drought in Central America. Last month Fortune magazine wrote that the USA will never solve its migration problem until it solves climate change.

Some may think my talk foolish. I firmly believe that we are seeing the nascent beginnings of how climate change will affect every aspect of our lives for the remainder of the century. I am not alone. The United Nations said that climate change is the defining issue of our time. The Nature Conservancy and others concur.

Many of us in the Finger Lakes Region have winter homes in Florida, or in other states in the southeast. Solomon Hsiang a professor of public policy at the University of California, who has written extensively about climate change, told Rolling Stone magazine that it is not a very pretty picture for America’s southeast. According to Hsiang the southeast will be the biggest loser due to damage from increased flooding, higher heat mortality and lower agricultural yields and will see an exodus of people. The migration of people will be northward, in particular the northwest, according to Hsiang.

As for the southwest, the Rolling Stone article says “In the not-so-distant future, places like Phoenix and Tucson, will become so hot that just walking across the street will be a life-threatening event.” 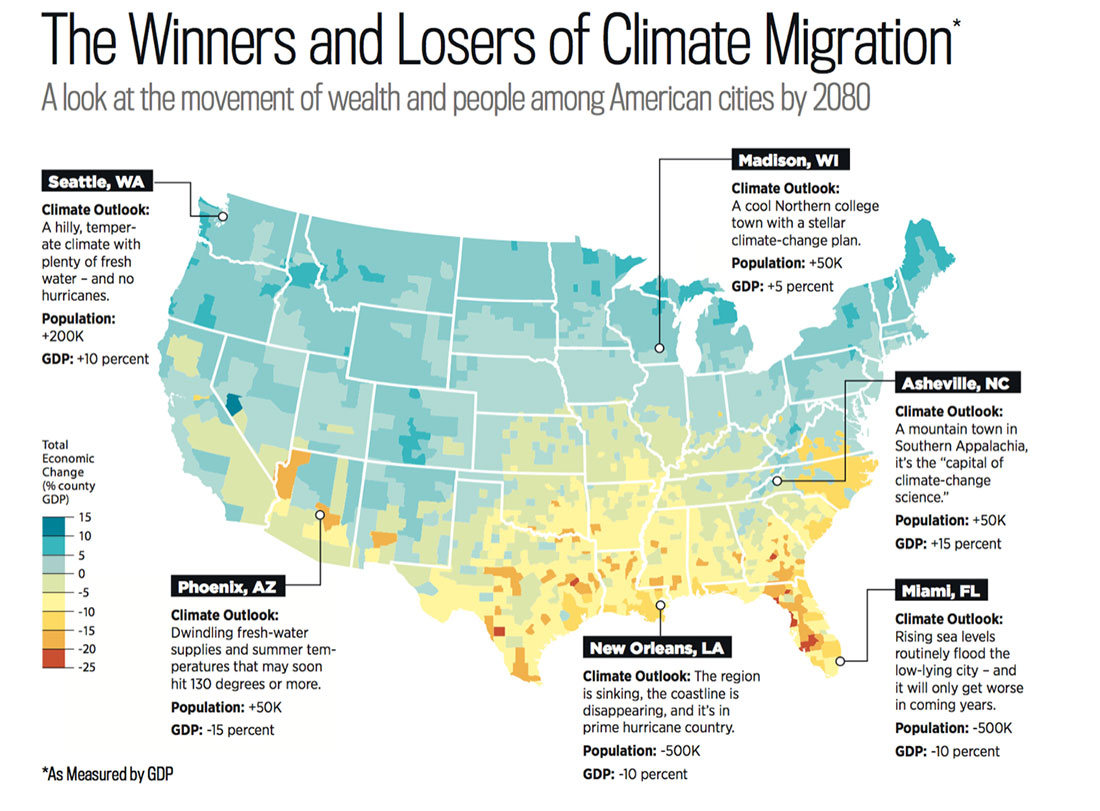 Climate change will also affect the hydrological cycle. Parts of the country will see increased droughts; we in the Northeast will see more spring rains. Flooding will pollute drinking water in many locals. Heat will bring increased algae blooms to our lakes, as we are already seeing in our region. Rising seawater will begin to drive saltwater into the aquifers of coastal cities. Add to this that NASA found that one third of the world’s underground water basins are in distress and risk running dry. Included was the Ogallala Aquifer in America’s Midwest whose water has helped farmers make it the world’s breadbasket. The trend is clear: the amount of quality potable water in the world will continue to decrease, as climate change rages.

Fortunately, the Finger Lakes Region and Upstate New York overall has lots of water. The Great Lakes contains 20% of the world’s fresh water. The Finger Lakes and Adirondacks Regions also have significant amounts of water in lakes and ponds. It is our abundance of water that adds to our region’s appeal to those seeking refuge from climate change.

We need to realize that the Finger Lakes Region and the Upstate New York Region overall should, if our resources are managed properly, see an influx of residents and businesses.

Don’t buy into all of the pessimism about our region’s economic prospects, and how the cold weather and snow are major repellents, or that New York State’s high taxes are a deterrent. Our region is on the cusp of seeing a large inflow of new residents.

Madis Senner is an author who lives in Syracuse. You can read his musings at motherearthprayers.blogspot.com. His latest book Everything Has Karma: Learning to Embrace Our Interconnectedness will be out September 23, 2019. Click here to purchase the book.

Nigel Peter Kent was born in England, and his passion for photography became apparent at the age of 14. He learned much about taking…