Saturday’s Open House is a chance to experience a noteworthy spirit in the history of the Finger Lakes and meet those looking to keep that spirit alive.

One of the Finger Lakes’ prominent Underground Railroad sites, the Howland Stone Store Museum in Sherwood (Aurora) will be having an Open House this Saturday, June 1, 2019, from 1 to 4PM. Visitor’s will not only have a chance to peruse the Stone Store but also get an early glimpse of how the restoration of the Opendore home is progressing.

Slocum Howland (1794-1881) was a business man and lawyer that was part of a vibrant Quaker community in the Aurora area. He built the store in Sherwood in 1837.

Slocum was an ardent social reformer and conductor on the Underground Railroad. His business of buying and selling goods afforded him the opportunity to transport Freedom Seekers on the Underground Railroad; it also provided him with the means to help people settle in the Sherwood area. Two of the better known Freedom Seekers to remain were Herman and Hannah Phillips who had three sons serve in the Civil War.

It is believed that passengers on the Underground Railroad would stay in the cellar of the store, or at one of the other buildings that the Howlands owned. There were also many other Quaker homes available nearby. The hamlet of Sherwood is listed on the National Register of Historic places because of its advocacy for social reform. https://www.howlandstonestore.org/Sherwood.pdf

Slocum’s daughter Emily (1827-1929) actively involved with Women’s Rights and with the education of African Americans. She was also a major benefactor to those efforts. It is believed that she funded over forty schools across America, the majority focused on the education of African Americans. Visit https://www.howlandstonestore.org to learn more. 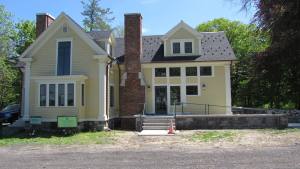 The Opendore House a few houses north of the Stone Store Museum was purchased by Slocum Howland’s son William (1826-1905) in 1853 who had married Hannah Letchworth. Upon their death it was transferred to their daughter Isabel (1859-1942.)

It is expected the Opendore house restoration will be completed by next year.

The Howland Stone Store has many Women’s Rights posters. There is also an Underground Railroad Pass carried by two Freedom Seekers who came the Slocum’s store in 1840. Upstairs is the “Cabinet of Curiosities” that contains memorabilia and artifacts purchased by the Howlands during their trips around the world.

The Opendore home is under restoration, but the drywall is up and you can see the rooms. The once extensive gardens only have some walls and walkways up. More is planned.

Madis Senner is an author who lives in Syracuse. You can read his musings at motherearthprayers.blogspot.com. His latest book is Sacred Sites in North Star Country: Places in Greater New York State (PA,OH,NJ,CT,MA,VT,ONT) That Changed the World. It is available at Books, ETC. in Macedon (facebook.com/booksetcmacedon).

The scale of harvest for most wineries is just big enough to overwhelm the average observer. At the busiest times, there is a small…