I walked into Hopshire Brewery in Ithaca to find that the owner, Randy Lacey, had just finished cleaning up the floors in the production facility adjacent to the tasting room. “There’s a yoga class in here tonight,” he shared with me.

What? “Yes, the instructor wanted a different type of setting, so the class is in our brewery. It seems to be working out great.”

Yoga and all, Hopshire embodies the Ithaca vibe of anything goes, but this approach is not limited to outsiders coming to the use the facility. Hopshire takes a comprehensive approach to the craft beer craze that’s sweeping the nation, and tries to put a local flare on the brew it offers to its growing base of loyal customers.

Randy Lacey spent most of his career at Cornell as an engineer for operations and was bitten by the home brewing bug around 2005. He and his wife Diane had also begun growing hops at home, supplying their own needs and tapping into the growing market for this beer-making ingredient. Fascinated by the history of hops-growing in New York State (upstate was the largest supplier of hops for much of the 19th century), Randy and Diane began to formulate their own idea for a local brewery.

“We traveled the country and saw all sorts of breweries: big, little, city-based, country-based,” Randy explains. “What we didn’t see was a brewery that emphasized hops growing right next to the brewery. That’s when we came up with our business plan.” Hopshire opened its doors in 2013.

Before a driver on Route 13 even sees the brewery building – which re-creates the look of a 19th-century hop kiln – they might notice the 1.5 acres of tall poles that hold up the ropes upon which the hop bines (yes, bines not vines) grow. These eight rows stretch in front of the property, creating a visual reminder that for Hopshire, agriculture is an important aspect of the operation. As a licensed farm brewery, Hopshire is required by New York law to source at least 20 percent of its hops from New York growers, a requirement which Randy readily exceeds.

The tasting room at Hopshire is intimate, holding a single long counter, although there is room for the various events and live music acts that are scheduled throughout the year. The production room is adjacent to the tasting area and the equipment is fully in view, framed by large windows for all customers to see.

By staying small, Randy can make beers “that don’t scale up,” using expensive local ingredients (he never uses additives, but uses real local fruit, maple syrup, and honey in some of the specialty beers). “There is variation because we are so small, but we create consistency through rotating and seasonal variety.”

In an annual event that embodies the Hopshire spirit, Randy and Diane welcome local hops growers to bring their “backyard hops” for a brewing of beer using green, or fresh, hops. The drop is the last Saturday of August and the participants are welcomed back to enjoy their brew the first Saturday of October. The entire event is called coHOPeration and it brings together local enthusiasts to enjoy the beer-making process.

“We want to demystify beer,” explains Randy. “It’s not complicated – we want to be a small, neighborhood brewery.” 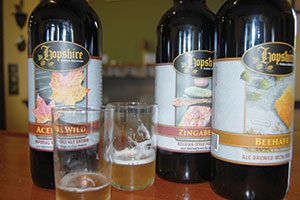 Hopshire has a variety of beers on tap at any given time, and there is something for everyone. The Beehave, an ale brewed with local honey, is smooth and inviting, while Brambles uses local raspberries to elevate the wheat ale with a subtle flavor that is neither too fruity nor cloying.

If you love hops, the Near Varna IPA has a good solid kick with citrus and caramel notes, but the Hamlet of Varna – a summer special – uses hops in concert with a smooth malt to create a sipper that should be fun for everyone. These are all nice brews!

Hopshire Farm and Brewery is located just north of Ithaca on Route 13 and is open Wednesday through Sunday.

To check out their events calendar for live music and other events, visit hopshire.com

story and photos by Jason Feulner

10/31/2018 story and photos by Gabrielle L. Wheeler What happens when you mix 1,000 pounds of pharmaceutical-grade Epsom salts in 10 inches of water?…