We always keep our ears to the tracks to see what Twisted Rail Brewing Company is up to next. As Owning Partner Ian Boni puts it, ‘the Twisted Rail train never stops running.” With tasting room locations already in Macedon, Geneva, and Canandaigua, the brewery’s next stop is on Honeoye Lake.

Equipped with fourteen boat slips and a huge outside deck on the lake, Twisted Rail Honeoye, which opened on August 13, is fully stocked to deliver their rock steady and reputable brand to a new set of lake life enthusiasts.

“The Honeoye location really fits our M.O. It was definitely in the ideology of how we run and operate,” says Boni. “Honeoye goes right along with the ‘Lake Life,’ just like Canandaigua. We are calling it the ‘Lakeside Taphouse.’ You get the same menu of food, same catalogue of beer, same quality of experience. And, of course, that ‘Lake Life,’ skis-up, boats, and that atmosphere versus the whole railroad theme that we have in the Geneva theater. We incorporate them all together.”

The latest Twisted Rail venture is congruent to a strategy that separates its business model from other members of the craft beer boom in the region. Twisted Rail and its team embrace the Finger Lakes for its nuts and bolts. They are motivated to be a part of the destination, not limiting it as a starting point.

“It was my plan from the start, and it did take some convincing. We are not a wholesale brewery and never want to be. That’s not what we are into. We are a retail brewery. We want you to come see us to try our beer, enjoy the experience, and buy from us directly,” Boni explains. “I don’t care if we are at stores; I don’t care if we are on tap at another bar. That turns out to be more of a headache. It’s completely opposite of where other breweries start. And I think that’s why we have still been able to succeed with so many new breweries popping up in the region. We are not fighting with other breweries for shelf space anymore, we are focusing on enriching the region.” 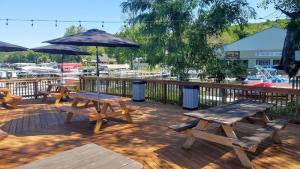 This focus is apparent at all the locations, but each has a unique touch to differentiate it. For instance, the Honeoye location will continue the Bloody Mary tradition of the building’s former tenant.

“The place (Boathouse Grill) used to do the crazy, over-the-top Bloody Marys, so we kept the tradition alive, the locals wanted it, and people came from all over just for these Bloody Marys,” says Boni. “We use all craft vodka, Black Button (Rochester) products only. We also add lobster tail to the premium version.”

Proving the importance of community, Twisted Rail has more collaborations on the docket including a Mango Gose Sour style beer with WeBe Brewing of Geneva, and added blueberry to a flagship lager in which they used fresh blueberries from Cooper Farms in Bristol.

“We finally did a Lake-to-Lake Lager, it’s brand new – made for lake consumption. Easy drinking, every person’s style beer. This is the one we added the blueberry to,” Boni reports. “I’ve also been working on some craft seltzers. We are trying to do some really neat stuff with that. And that’s the thing, we know what is in demand for our type of locations.”

It’s an incredible feat to mold your business around your products and showcase your location. Twisted Rail has done exactly that with the Finger Lakes.

“I don’t know if we will expand further, you never know, the train never stops running,” as Boni likes to put it.  “Keep your eyes open for our next location.”

It could be coming to a lake even nearer to you, don’t miss boarding.

Twisted Rail also has locations in Canandaigua, Macedon and Geneva.