February break has come and gone. My daughter is in second grade and brought home four new books the Friday it began. Within 30 hours, she had voraciously gotten through the first three. On Saturday afternoon I wondered what I was going to supply her with for the rest of the week; I knew I had insufficient items to offer for a rate of 1 book/10 hours. I happened to remember that downstairs there was a shelf of books left by my grandfather and decided to give that a try.

With a stack of a dozen possibilities, I returned an hour later. Most of the books were destined for the library book sale but a few I thought she might be interested in, such as Winnie the Pooh and Pippi Longstocking. In the end, I’m not sure that she cracked either of those, but one I did see her reading was Runaway Slave: The Story of Harriet Tubman by Ann McGovern. A little to my surprise, she requested that I read it aloud during story time that night. 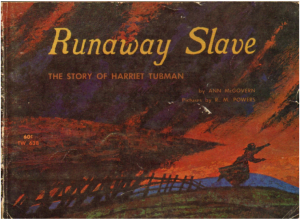 Printed by Scholastic between 1965 and 1973, Runaway Slave is the story of Harriet Tubman’s life. It chronicles her childhood as a slave, running away on the Underground Railroad, returning again and again to help others, and finally helping her own parents escape when they were in their 70’s. It is written for children but opens with thoughtful questions like “Can a human being be owned by another person – the way a cow or horse is owned?” For me, Harriet Tubman’s story is inspiring and amazing – in the present time, who does brave acts such as she did? But I also loved reading the story with my children because Harriet Tubman eventually settled in Auburn to finish out her days.

Call me dense, but somehow, I got through high school and college never making the connection that she had once lived in the same town my grandmother had grown up in. That is, at least not until I was sent a copy of Life in the Finger Lakes magazine while I was living in Honduras as a Peace Corps Volunteer. The magazine had a story about the Underground Railroad in local history and I still find it ironic that I had to be 1,000 miles away to learn about something located one hour away from my house! My kids are little, but I am planning a trip to the Harriet Tubman National Historic Park to bring this history even closer to home for them as well. Maybe, just maybe, they will make the connection earlier than I did.