The region gratefully welcomed spring over the weekend and the rising temperatures and sunshine hinted at the plethora of outdoor summer activities soon to reopen around the Finger Lakes. Hiking and waterfall-chasing will soon be made more easily accessible with trails like the Watkins Glen State Park Gorge Trail opening for the season. Though the 1.7-mile trek through the falls and caves of Watkins Glen Gorge is closed until May, I was still able to take in the scenery of the park and downtown Watkins Glen from the trails that run on top of the cliffs. 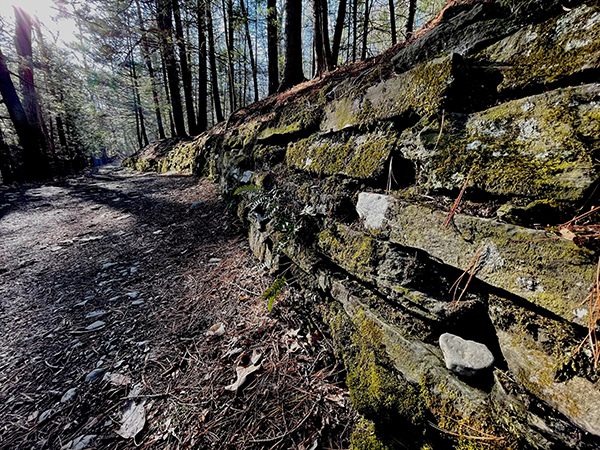 I began my afternoon excursion at the southern entrance of the park and followed signs to South Rim Trail to find a decent view of the major falls. I met hikers, joggers, families and photographers on the trails who enjoyed the outdoors while safely socially distancing on the well-kept paths. The partially-thawed dirt trails, freshwater below and forest of towering pine trees gave off the refreshing, earthy scent of springtime. Late afternoon sunlight filtered down through the pine canopy and cast onto patches of moss that clung to the rock walls protecting both sides of the trail. I understand why this place is a popular destination for summer visitors. 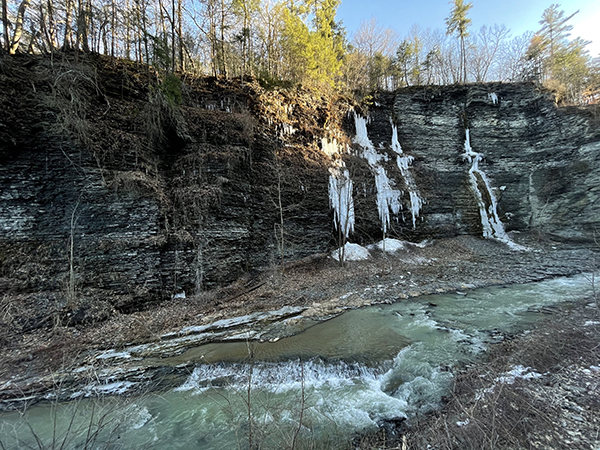 South Rim Trail offered a steep, inclined workout. Several side paths along the way detoured to the distant splashing of the falls. I took one of the detours all the way down to the edge of the gorge, where a suspension bridge connected to other trails. At the center of the bridge, I watched as the rapids directly below twisted and churned through slick rocks, out toward downtown and into the glimmering blue waves of Seneca Lake on the horizon. 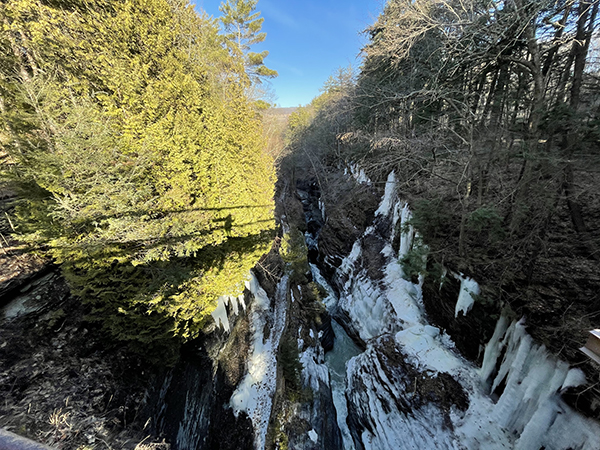 I crossed the bridge to the end of Indian trail, which looped back to the upper entrance of the park. Further down Indian trail was a lookout point adjacent to the suspension bridge. It offered a great view of downtown, but the falls would be viewed better from the Gorge Trail. The steps and stone walkway of the gorge trail looked adventurous but were understandably closed under a thick layer of ice, snow and leaves.

As the sun began to set, I made my way back to the southern side of the park and drove to the main park entrance downtown where there was a paved lookout to the historic Sentry Bridge. The stone walkway arched over a short waterfall and molded naturally into the rocky cliff sides. The bridge marks the beginning of the gorge trail and the ascent into the heart of the waterways. I look forward to May when the trail will reopen, and I can explore it myself.