by Kim Thompson, The Corning Museum of Glass

“Fifteen miles on the Erie Canal/We’ve haul’d some barges in our day/Filled with lumber, coal and hay.” And glass? Yes! The Erie Canal had a pivotal role in making Corning America’s “Crystal City.”

In 1868, the Brooklyn Flint Glass Company loaded its equipment onto canal barges bound for Corning. Elias Hungerford, a Corning businessman who developed a patent for glass window blinds, had convinced the Houghton family who owned the company to relocate their operations from Brooklyn to Corning.

The offer was an attractive one. The cost of doing business in the New York City area was high, which was not the case in Corning. Proximity to an abundance of natural resources sweetened the deal, as did the fact that Corning had easy access to an established transportation network accessible through the Erie Canal and various expanding railroads. From Corning, products could be shipped to all corners of the country. Thus began 150 years of glass innovation that has shaped the modern world.

“Glassmaking in Corning has influenced countless aspects of the way we live our lives, from the first electric light bulbs for Thomas Edison and the invention of optical fiber for telecommunications, to the glass used in modern flat-screen displays,” said Rob Cassetti, Sr., director of Creative Strategy and Audience Engagement for The Corning Museum of Glass. “It all began with a voyage on New York State’s waterways.”

An Interesting Way to Commemorate the Journey

“I like anniversaries,” Cassetti continued, “and it occurred to me that to celebrate the 150th anniversary of glassmaking coming to Corning from Brooklyn, it would be amazing to put one of our mobile glassblowing studios on a canal barge and retrace the journey.”

It didn’t take long for people to get on board with the idea.

This summer, The Corning Museum of Glass is headed back to New York’s historic waterways to launch GlassBarge. The patented, all-electric mobile hot shop – the museum’s own innovation – will be installed on a canal barge that will travel throughout the state, retracing and expanding the original journey over the course of four months. Free, live, glassblowing demonstrations will be presented along the way.

“We’ve blown glass all over the world, but with GlassBarge we really get into the heart of communities,” said Cassetti. “We’re taking glassmaking all across New York and sharing it with the people who we want to make proud that this is part of their history.”

The GlassBarge tour will launch at Brooklyn Bridge Park on May 17, then will travel north on the Hudson River, westward on the Erie Canal from Albany to Buffalo, and will then double back to Rochester to connect with waterways linking to the Finger Lakes.

The voyage is the 2018 signature event for the Erie Canal’s bicentennial period (2017-2025), and also coincides with the centennial of the commemoration of the Barge Canal in New York State.

What to See Along the Way

Last summer, a prototype version of GlassBarge made a few stops in communities along the Erie Canal in preparation for the far more ambitious 2018 journey. It debuted at the Fairport Canal Days celebration where thousands of people had the opportunity to take in a Hot Glass Demo.

“I think the GlassBarge illustrates that the canal is multidimensional,” Scott Winner, executive director of the Fairport Partnership, said at the time. “The potential embodied in this string of water is really limitless.”

In each community along the tour, free glassblowing demonstrations will be provided daily from 11 a.m. to 6 p.m. Reservations are strongly encouraged, and free timed tickets are available at cmog.org/GlassBarge. The 30- by 90-foot barge accommodates 150 people who can come aboard and watch the molten magic unfold.

“GlassBarge is our floating invitation to our neighbors across New York State to come visit us back at the museum in Corning,” said Cassetti. “Those who see us out on the waterways will get a small taste of the fascinating material that is glass, and we hope to ignite in them the desire to discover more.”

Museum glassmakers developed a signature piece out on the canal last summer using a technique that involved water. When a molten glob of glass is dunked in water, tiny cracks are created on the surface that gives the glass a “crackle finish.” Glassmakers on GlassBarge, inspired by their surroundings, carried their 6-foot blowpipe to the edge of the barge and dunked it down into the Erie Canal. The technique quickly became dubbed “Kissed By The Canal.”

This summer, GlassBarge will be moved along the waterways by the historic tug W. O. Decker – part of the fleet of the South Street Seaport Museum in lower Manhattan – which is being restored in preparation for its Erie Canal journey.

Also accompanying GlassBarge will be the Lois McClure, a replica of an 1862 canal barge; and the C. L. Churchill, a 1964 tugboat. Both are part of the permanent collection of the Lake Champlain Maritime Museum, located in Vergennes, Vermont.

Every Canal Town has a Story

“The Erie Canal is America’s most iconic and enduring man-made waterway,” said Bill Sweitzer, Director of Marketing for the New York State Canal Corporation. “It’s full of stories. Besides the movement of products and goods, the Erie Canal was all about ideas, social movements, and the people who traveled on the canal.”

A feat of engineering that took nearly a decade to complete, the Erie Canal fundamentally put New York State on the map, linking Lake Erie in Buffalo with the Hudson River in Albany. The unparalleled accessibility it afforded Upstate New York opened up a world of possibilities as far as trade and commerce were concerned. New York City became the largest port city in the United States; cementing its position as the center for industry and opportunity.

“It’s a story about innovation,” said Cassetti. “The Erie Canal transformed our state and enabled the story of glassmaking in Corning. We look forward to telling that story out on the New York State waterways this summer, and to shining a spotlight on the stories of each waterfront community we visit.”

by Kelly Conway, Curator of American Glass, The Corning Museum of Glass 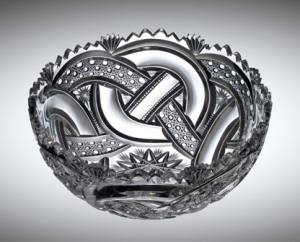 At the same time Corning Glass Works was getting established in its new home, a growing trend in American luxury glass developed: masterfully-cut, high-quality, lead-glass tableware we know today as brilliant cut glass. Corning became the leading center for this style of glass, with dozens of new firms established and drawing international recognition for their inventive designs. An influx of talented glassmakers from Europe and America led to the growth of the city and region, which became known as the “Crystal City.”

The renovated Crystal City gallery features iconic objects from the museum’s collection of cut and engraved glass, as well as selected private loans. Together with updated LED lighting, digital displays, and a selection of archival materials from the Rakow Research Library, the refreshed Crystal City gallery connects people to the stories about Corning’s origins as a center for glass. The focus is on the history and innovations that led to its emergence as the “Crystal City.”

04/05/2018 Apply directly to venues at rochesterfringe.com by April 30th Organizers of the KeyBank Rochester Fringe Festival opened the 2018 show-submission process yesterday, on…