Giant hogweed is a federally-listed noxious weed that occasionally occurs in the Finger Lakes Region. While not particularly common anywhere in the state, giant hogweed nonetheless is present and can be encountered by people who might not be aware of its danger. Its sap, in combination with moisture and sunlight, causes phytophotodermatitis in humans, which can result in blisters, burns, long-lasting scars – and if it comes in contact with eyes – possible blindness. These serious reactions are due to the furocoumarin derivatives in the leaves, roots, stems, flowers, and seeds of the plant. 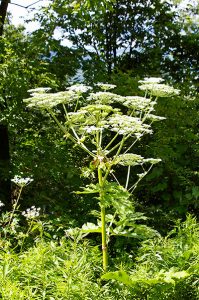 Giant hogweed is native to Central Asia and – strangely enough – was intentionally brought to Great Britain as an ornamental plant in the 19th century. It has since been introduced to many other parts of Europe, Canada, and the United States and it became established in New York around 1917. It is a fast-growing herbaceous plant that can reach eight or ten feet in height and by forming dense stands, usually along river and stream banks, can overtake native plants and significantly alter wildlife habitats. It has enormous leaves that resemble those of a cut-leaf philodendron and large umbrella-shaped white flowers that can stretch more than two feet across.

The sap of the giant hogweed plant is phototoxic and when any contacted skin is exposed to sunlight, severe skin inflammation can result. Initially the skin turns red and starts to itch but within 48 hours, blisters form and it begins to burn. As previously mentioned, any contact with the eyes may cause temporary or permanent blindness.

The New York State Department of Environmental Conservation has had an active program to control giant hogweed since 2008, which includes a reporting system, data base maintenance, and dispatching personnel for removal or herbicide control. You can report an occurrence of giant hogweed to the DEC by emailing ghogweed@dec.ny.gov or by calling the giant hogweed hotline at 845-256-3111.

story and photo by John Adamski

04/13/2021 by Laurel C. Wemett From Watkins Glen to Geneva, from Syracuse to Rochester and points in between, we have the Finger Lakes covered…