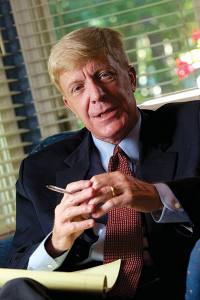 During the 1950s, Dwight Eisenhower (“Ike”) was in the White House, television’s June and Ward Cleaver were raising “The Beaver” and his big brother Wally, and baseball was America’s favorite pastime.

Meanwhile, Curt Smith, author in 2018 of The Presidents and the Pastime: The History of Baseball and the White House, was growing up on Church Street in Caledonia in Livingston County. Smith, the oldest of five children, describes his hometown as “Mayberry without the accent,” a reference to the fictional southern town and its sheriff, Andy Griffith, on another TV staple of that era.

“We knew we were lucky to grow up there,” recalls Smith, who now lives in Rochester with his wife Sarah and children Olivia and Travis. “President Eisenhower, in office from 1953 to 1961, called being raised in a small town ‘a great and priceless privilege.’” Except for John F. Kennedy, “each American President from Truman through Reagan came from a small town or city,” says Smith who has researched all the presidents. “It says something good about and for America.”

“In Caledonia, I walked uptown to the public library where I devoured books,” recounts Smith, who still relishes the memory of the library’s wooden card catalogue. He can visualize the shelves divided into subjects like sports, fiction, and biographies. At 8 or 9 years of age he was writing stories about the Civil War and baseball. His grandmother approved. It was a good thing, she said, that he could write because he was no good at farming. “That must have been facetious,” says Smith with amusement as he never actually lived on the farm where his father grew up.

Today, a successful writer and commentator, Smith credits his parents with instilling in him the American work ethic, self-reliance, and the value of education. After meeting at Houghton College, the couple had married, settled down, and started a family. Later on, each pursued an advanced degree. His mother became a high school librarian and his father, an agriculture teacher, became a high school guidance counselor. Books filled their home, The New York Times arrived on Sunday, and the latest Broadway musicals were available thanks to a steady supply of 33-1/3 rpm records from a mail-order record club.

From Reporter to Author

After graduating as an English major from the State University of New York at Geneseo, Smith learned deadlines as a reporter for the Democrat & Chronicle newspaper. He became the publicity director for Hamilton College, and from 1980 to 1982 was a senior editor for The Saturday Evening Post. In 1978, America’s Dizzy Dean, his first book, was published about the Major League player-turned broadcaster. Dean’s language was so original, recalls Smith, that Ol’ Diz said, “They had to be my words, ’cause no one else would have ’em.”

Today at Caledonia’s Library, the shelves hold some of Smith’s 17 titles which focus on his two passions, baseball and the U.S. presidents. His most recent work, The Presidents and the Pastime: The History of Baseball and the White House, combines the two subjects. He is considered a leading authority on baseball, an early love, because of its dependency on language. “Growing up, I lived nowhere near where a major team played – so I followed them on radio and TV,” recalls the youthful 67-year-old.

Smith calls baseball “the greatest talking sport” – its slow pace reliant on a broadcaster’s intellect and descriptive verbal skills. Ten of Smith’s books focus on broadcasting. Voices of The Game (1992) became an ESPN TV and Smithsonian Institution series. A favorite baseball memory – Kirk Gibson’s game-winning home run for the Dodgers in Game 1 of the 1988 World Series – was narrated by legendary broadcaster Vin Scully and is the subject of Smith’s Pull Up A  Chair (2009).

For more than 20 years Smith wrote speeches for political office seekers. He was first hired by former Texas Governor John Connally, who unsuccessfully ran for president in 1982. From 1983 to 1988 he worked in Washington with President Ronald Reagan’s cabinet and occasionally George H.W. Bush, Reagan’s vice president. Then in 1988, with Bush’s election, Smith became one of the 41st president’s major speechwriters.

Smith was honored by his induction into the Judson Welliver Society of Former Presidential Speechwriters, named for the first presidential speechwriter who worked for Warren G. Harding, president from 1921 to 1923.

After Bush’s loss to Bill Clinton in his bid for re-election in 1992, Smith shifted to writing speeches the former president gave to raise money for his Presidential Library. His admiration for “Bush 41” is evident in George H.W. Bush: Character at the Core (2014), along with details of his speechwriting. Speeches written for Bush’s dedication of Richard Nixon’s Library (1990) and his eulogy for Ronald Reagan’s funeral (2004), among others, are included in the book.

He also became a lecturer at the Smithsonian Institution, and commentator on a number of radio and television stations. His “Perspectives” series on Rochester’s WXXI Radio dealt with politics, pop culture, and sports. One of his frequent guests on the decade-long 2003-2013 series was former New York State Senator Ted O’Brien (D-55), now assistant attorney general in charge of Rochester. They spoke about politics and current events, both local and national.

“Curt is decidedly conservative in his politics,” says O’Brien. “He is on the right of the political divide, and I clearly reside on the other side of the aisle. And we are both passionate about our politics. Looking through the lens of today’s political environment, where participants on each side of the divide seem only capable of yelling past each other, Curt and I have always been able to genuinely enjoy the differences in our views.”

As in Curt Smith’s youth, there are still no Major League Baseball teams in the Finger Lakes Region, but there is no shortage of talent. At our request he provided the following names of ballplayers who have gone from the Rochester Red Wings, a Triple-A affiliate of the Minnesota Twins, to play or manage Major League baseball teams.

In 2018, Smith spoke at the 15th Annual Roosevelt Reading Festival at Franklin Roosevelt’s Presidential Library in Hyde Park for those authors who have written on FDR. His new book reflects his admiration for the depression and wartime president, whom he calls the “greatest president of the 20th century.”

O’Brien credits Smith with a tremendous knowledge of history. “He can illustrate his points with historical references that validate his argument. But he is also adept at inserting iconic movie references, or quotes from great literature, and of course references to baseball, to keep his points relatable to his audience. He is able to intertwine humor, using a sharp wit and a quick laugh, into his narratives.”

Currently, Smith persuasively offers his perspective on current issues in a regular column written for GateHouse Media newspapers. For 20 years in his twice-weekly English classes on “Presidential Rhetoric and Public Speaking” at the University of Rochester, he has gained his students’ admiration by sharing his wealth of knowledge and experience.

“One of the skills Professor Smith instills in his students is the importance of storytelling in the art of communication,” says Kevin Connell a former student. “Applying this strategy, he includes anecdotes from his own life as well as the public icons studied in his courses. Delivering responses that are both informative and engaging, Professor Smith is routinely, as he likes to say, ‘grace under pressure.’”

Connell, an associate attorney at Tredett Cristo PC, has authored two books on higher education reform. He describes his teacher as “a mentor, scholar, and friend personifying the same virtues that his courses instill in students: humility, courage, conviction, and commitment to a greater purpose. An embodiment of American exceptionalism, Professor Smith is a man devoted above all to his family, faith, and country.”

To learn more about Curt Smith and his other books visit his  website at curtsmithusa.com. To listen to his 2018 talk at the Roosevelt Presidential Library and Museum at Hyde Park, visit https://www.c-span.org/video/?446655-4/the-presidents-pastime 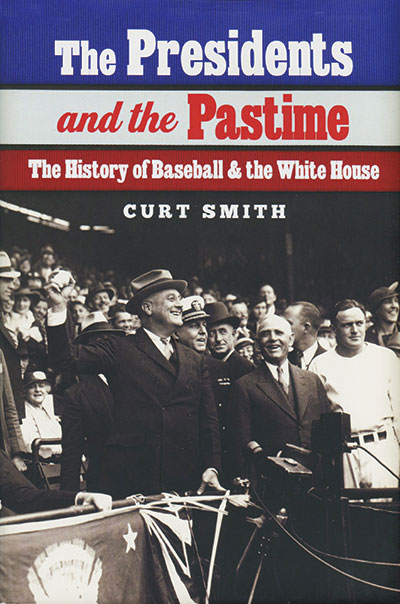 The Presidents and the Pastime: The History of Baseball and the White House
Curt Smith
University of Nebraska Pressnebraskapress.unl.edu
2018

Author and baseball historian Curt Smith explores America’s cultural history through the interrelationship of baseball and the U.S. presidency. The book provides an in-depth look at how America’s chief executives related to what became America’s national pastime.

This is a winning read filled with political and sporting annecdotes and factual details. It will be relished by historians, educators and anyone passionate about the presidency and/or baseball.

Baseball can be traced to games like “rounders,” imported from Great Britain and played by George Washington’s troops at Valley Forge during the winter of 1777-’78. Over the next two centuries, as the game evolved, some presidents (and first ladies) loved baseball; others were less enthusiastic.

The index proves indispensible – whether identifying the president who served alcohol to Babe Ruth at the White House while backing prohibition (Warren G. Harding), or determining when Jackie Robinson broke the color barrier (on April 15, 1947, he played his first major-league baseball game, the Dodgers hosting the Phillies at Ebbets Field in Brooklyn on Opening Day).

Written in a conversational manner, the book tackles a complex topic with humor and insight. Smith calls for the induction of President Franklin Roosevelt into the National Baseball Hall of Fame for his role in saving the game during World War II. Sound suggestions are also offered for changes to the game and how it is broadcast to insure baseball will be enjoyed by new generations of fans.

Otisco Lake is the easternmost of the 11 Finger Lakes, lying in the southwest corner of Onondaga County near Syracuse, just east of better-known…