A group of ladies accompanied by some monarchs have fled Canada and taken refuge in flowery Mexico — my patch of Mexican sunflowers that is.

It all happened this past weekend. It appears that a flock of painted lady butterflies hopped the cool winds out of the north and, along with some monarchs, took a ride to my neighborhood. I believe they were riding southward on the same heavy gusts that knocked over two of my sunflower refueling stations. No worries. Six Mexican sunflowers stand in full bloom ready to serve and fatten all who hunger for nectar.

About half the size of monarchs and common across the continent, painted ladies, like monarchs, migrate southward. They belong to the genus Vanessa. This genus also includes the familiar red admiral and the American painted lady–a look-alike with a similar name. But mine were just plain old painted ladies (Vanessa cardui).

But they’re really not so plain. Cloaked in a dusky orange wrap, the visiting painted ladies also featured stripes and polka dots of white, brown, and black, with white edging the scalloped wings. And the underside of their wings when folded up displays an intricate etching of lines and eye-spots of turquoise encased in black circles. Combined with splotches of orange, brown and blue supported by silvery struts, their under wings seem more like broaches revealing both Navajo and Tiffany influences (who were probably originally influenced by the painted lady).  All in all, a nice looking butterfly. 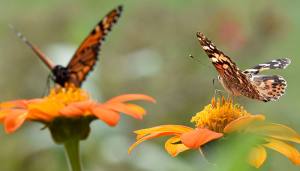 What makes them even more appealing is that they’re crazy fliers. And fast. And completely chaotic. Helter skelter, you could say. They alternately dash and dodge, dive and dip, zig and zag, zip and zoom; all in an effort (I presume) to avoid some imaginary (or maybe not) pursuer. Just when you think the one you’ve been tracking has evaded you, it’s likely to dive bomb back to the very plant it abruptly abandoned. It’s an exhilarating exhibition of aerial acrobatics.

The only obstacle they (and the monarchs) faced over this past weekend were each other, and a few bullying bumblebees. The burly bumblebees seemed to exploit the butterflies’ nose for nectar. Keeping an eye on the butterflies, they didn’t hesitate to move in and bump them aside whenever the butterflies enthusiasm indicated they’d found a rich vein of nectar.  Time and again, they took over a blossom from a butterfly. But they were never too aggressive. I don’t think they wanted to harm their nectar scouts.

New website “gofingerlakes.org” is a free guide to the best hikes, bikes, paddles and outdoor adventures in the region by Kelly Makosch, Finger Lakes…