Employees on the Finger Lakes National Forest (FLNF) are excited to announce their first BioBlitz. A BioBlitz is a detailed study of biodiversity in a specific location over a specified period of time, bringing experts and amateurs together to collect data. While among other things the Finger Lakes National Forest is heavily used for hunting and recreation, the Forest Service would like to enhance documentation in terms of biodiversity.

The Forest Service is actively seeking public participation in the BioBlitz program. Forest Service staff and members of the public will record observations by taking a photo in the field with their phone within the app or by uploading photos online later. If location-tagging of photos is enabled on a participant’s phone, their observations within the project area will automatically be included in our BioBlitz as they add images and observations to iNaturalist. Compiled observations and species lists are viewable on the Finger Lakes National Forest BioBlitz page at: https://www.inaturalist.org/projects/finger-lakes-national-forest-bioblitz. 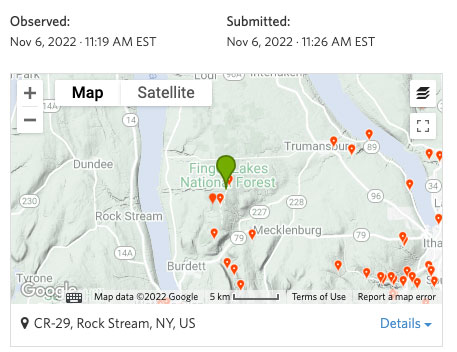 The BioBlitz will be virtual, via iNaturalist, with no scheduled gathering of observers, although educational field trips to share discoveries will be considered for future dates. In contrast to a traditional BioBlitz which takes place within one 24-hour period, this BioBlitz will run year-round and will last indefinitely. The goal is to gather as much information as possible about the diversity of life on the Finger Lakes National Forest, and to capture phenological differences between taxa groups. There are over 16,000 acres of National Forest to be explored, and much of it has had inventory for only specific taxa.

Whether you are most interested in observing rabbits, ants, orchids, or any other living thing, the Forest Service is hoping that members of the public will join them in the Finger Lakes National Forest to record what they see. Click here for the online map of the National Forest: https://www.fs.usda.gov/recarea/gmfl/recreation/hiking/recarea/?recid=80781&actid=50. Interested members of the public are encouraged to stop by the Hector Ranger Station at 5218 State Route 414 in Hector, NY to get maps or people can contact Jodie Vanselow, Hector District Ranger at: jodie.vanselow@usda.gov