Artist Amy Hutto and her husband John, a law enforcement retiree, moved to Bath from Fort Collins, Colorado, in 2017. It wasn’t a random decision; they wanted to be closer to their two daughters who were pursuing graduate degrees in Syracuse and Buffalo – and the couple had previously visited Geneva, where they had fallen in love with the Finger Lakes Region.

“I feel so fortunate to live in the Finger Lakes,” says Hutto. “It’s beautiful, the people are friendly and I’ve found a wonderful and supportive artistic community that gives me a sense of belonging.” A full-time artist since retiring as an art educator a decade ago, Hutto now has new native animals, flora and landscapes to paint, all executed in a bold style with her signature gold leaf accents.

“I love the spontaneity in Amy’s artwork,” says Jesse Gardner, co-owner of West End Gallery in Corning. “Her brush strokes seem unlabored and her color choices are often bright and vivid. Amy’s abstract and landscape paintings evoke a sense of peace, while her whimsical animal paintings feel more energetic and always make me smile.” The gallery began representing Hutto’s work in 2018. 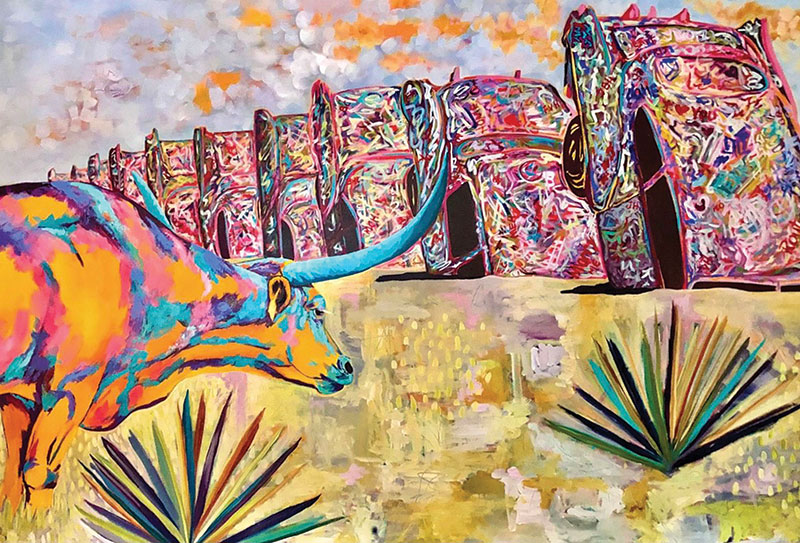 “Cadillac Ranch” with Longhorn was inspired by a photograph taken by Schumacher Cattle, LLC in Era, Texas. It is one of Hutto’s favorite paintings.

Hutto never planned on art as a profession. Originally from Texas, the schools she attended in her small rural community didn’t even offer art classes. When she was young, her father began painting landscapes and set up an easel for his daughter to paint alongside him. He would become an accomplished artist and later the first art teacher in her high school, but by then she was in college and planning on a fashion merchandising career.

Working in retail after graduation didn’t work out as well as she had imagined, so Hutto decided to follow the path of her father and her older sister, both art teachers. “There were many signs along the way that my true calling was in art, but I managed to ignore them all for a few years,” she explains.  In 1989, she enrolled at St. Edward’s University in Austin to begin working on her K-8 education hours. She and John, then a police officer, also married that year.

In 1991, their daughter Megan was born – sister Molly would follow in 1994 – and Hutto began teaching art classes. The Huttos raised their girls in Austin. John climbed the ranks to assistant police chief, while Hutto pursued another art certification and flourished as an educator. Over a 23-year career, she estimates she taught approximately 5,000 students. She was also tapped to establish the art programs at two new elementary schools. Outside the classroom, Hutto organized the first district-wide student art show (still an annual event) and led peer workshops and professional development sessions at the state and district level.

There was little time between work and family for Hutto to pursue much art-making of her own. “My teaching filled my creative needs, and I was happy with that.” she says. 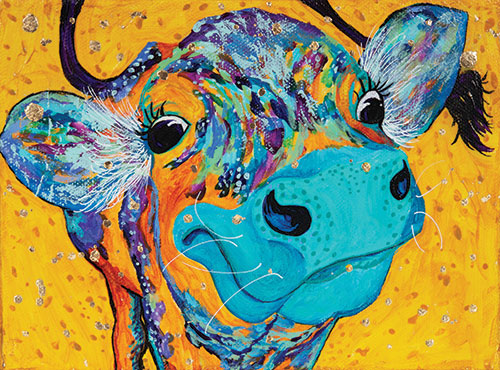 A new animal painting begins with a search for the right image. Hutto looks for a strong facial emotion or a dynamic pose. “I know it when I see it because it’s like a connection has been made: ‘that’s it, this is the one, it’s perfect,’” she says. Then Hutto selects her canvas size and shape, often gravitating toward square formats. Once the subject is lightly drawn in pencil, Hutto either adds a texture medium layer or tones the canvas with a solid base color. Backgrounds aren’t pure solids – splatters of accent colors help connect her animal subjects to their environment.

Hutto paints eyes and muzzle areas first. “I often zoom in on the animal’s face, especially my cows,” she says. “I love their goofy expressions. I also tend to simplify the animals. I’m not trying to create a realistic depiction.”

She then shifts to layering color, scratching through new layers to reveal colors underneath. Lastly, Hutto adds gold leaf embellishments. “I love that gilding has been used in works of art for centuries,” she says. “It makes me feel connected to artists who came before me. I’m using a very historical technique, but in a contemporary way.”

In December 2011, Molly was a high school senior and Megan was in college when John accepted the police chief position in Fort Collins, Colorado. The Huttos were excited to live in Colorado. John moved first while Hutto stayed behind with Molly to finish the school year. In summer 2012, Hutto retired from teaching and joined her husband to pursue her own art in their new community.

It was a slow transition from art teacher to fine artist. Now the teacher had to learn, and it took time to develop her unique painting style. “I was a bit all over the map,” Hutto says. She explored impressionism, abstract and representational painting, mixed media and collage.

Hutto heeded advice from a local artist to “paint, paint and paint some more” and to determine her favorite subject matter. “Once I focused on animals, my style evolved and developed very quickly,” says Hutto, an animal lover. “I enjoyed my work more once I began simplifying the animals and made them the main focus, so backgrounds became solid or swaths of color.” Her paintings often leaned toward impressionism, with a bold, expressionistic color palette. Acrylics became her preferred medium.

By 2015, two galleries were representing Hutto and she was an exhibiting member of a local art league. She participated in art festivals, and her paintings hung in two Colorado senators’ offices in Washington, D.C. One career highlight was a Platte River Power Authority commission to create a large work for their new Fort Collins campus. Working from photos taken of a bison herd on the property, Hutto painted a tender tableau of a mother and her calf on a 60” x 60” canvas.

By then she was living in Bath and establishing herself in the Finger Lakes Region’s art scene. The Huttos’ residence is an 1880 barn previously converted into a home brimming with character. Hutto’s studio is a former bedroom with a working fireplace and a balcony. “I love this space,” she says. On weekdays, Hutto spends about five hours a day in it, painting, contacting galleries, ordering supplies, updating her website and maintaining a social media presence.

In addition to her West End Gallery representation, Hutto joined The ARTS Council of the Southern Finger Lakes. Her paintings have been exhibited in member shows in their Corning gallery. Gallery curator Chris Walters first saw Hutto’s work at West End. “I remember being immediately drawn to the vibrant colors and whimsical nature of her paintings,” Walters says. “I hadn’t seen work like that before in our area.”

In 2018, art lovers Jenn Fallows and Matt Crossken stumbled across Hutto’s artwork when they wandered into West End Gallery on their first date. They were enchanted by a small fanciful cow painting, but it had already been sold. Two months later, Crossken surprised Fallows on her birthday with a different, much larger cow painting.

The couple continues to amass Hutto works – including five they commissioned.

“She has such an incredible ability to capture color, personality and humor in her art, which makes us smile ear-to-ear every time we look at our collection,” says Fallows.

Hutto has hit her stride in the Finger Lakes, but she continues to set new benchmarks to challenge herself creatively, such as combining abstract images with animal painting, revisiting mixed media and collage, and creating some fun, retro-kitschy cowboy and cowgirl pieces. It’s a fond nod to her Texas and Colorado roots and a culmination of all her life experiences coming to life on canvas.

12/2/2021 The fifth edition of Bluff & Vine is now available at Long’s Cards and Books in Penn Yan and online at Amazon.  An…