The New York State Equal Rights Heritage Center and the City of Auburn are excited to announce the arrival of “Harriet Tubman – The Journey to Freedom“ traveling exhibition.

The sculpture has traveled across the country, striking a meaningful conversation about the life of Harriet Tubman.The exhibition will display on the property of the historic Harriet Tubman Home (180 South Street, Auburn, New York), where she lived as a free woman for more than 50 years, from July 1 through August 31, 2022. This exhibition is made possible by support provided by the City of Auburn’s American Rescue Plan Act (ARPA) allocation of funds to support the City of Auburn Historic and Cultural Sites Commission’s Harriet Tubman Bicentennial project, and a grant from the Cayuga Community Fund Leadership Council funds at the Central New York Community Foundation.

“Harriet Tubman is a great American hero and Auburn is proud to host ‘The Journey to Freedom’ statue this summer,” said City of Auburn Mayor Michael D. Quill. “We invite all to celebrate the bicentennial of Harriet Tubman’s birth by visiting our city to view this tribute to her and exploring the places that are part of where she lived in freedom. Her over five decades living in Auburn can be experienced with visits to her home or by walking the same streets she did on a guided National Park Service tour.” 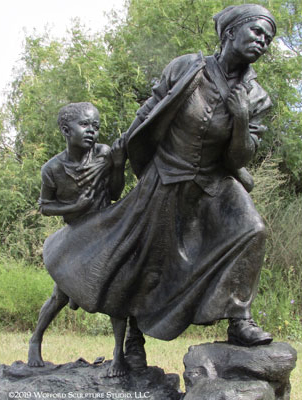 Award-winning sculptor Wesley Wofford created the powerful piece to represent the challenges Tubman faced on her journey, symbolism of equality, and freedom that had yet to come. “Harriet is leaning into the wind with her shoulder, eyes cut formidably up, bracing herself against the elements.” He added, “The wind illustrates the peril of the journey and serves as a metaphor for the intense opposition she faced.”

Although the exhibit will arrive Friday, July 1, the official celebration of the statue will be held on July 23 during Harriet Tubman descendant weekend, with more details to come.

“I am honored that ‘The Journey to Freedom’ is being exhibited in Auburn at Harriet Tubman’s homesite,” said sculptor Wesley Wofford. “In my mind this hallowed ground may be the most significant location of her life being the place the newly liberated free woman chose to be her home. And it will be exciting and humbling to see and meet so many of her descendants as they are the direct conduit to such a legendary woman. Harriet Tubman’s legacy and voice resonates through the centuries and continues to inspire us all to take action to forge a more equitable future. This traveling statue has ignited a national dialogue thanks to the activists and partners that have built such important programming around her and I am honored to in some small way assist in amplifying her message.”

The Harriet Tubman Home, Inc. is open to the public Tuesday through Saturday until 3 p.m., offering daily tours at 10 a.m. and 2 p.m. by appointment. The National Park Service provides free tours at 2 p.m. Thursday through Saturday, in addition to a 10 a.m. walking tour from the Equal Rights Heritage Center, 25 South Street, Auburn. For more information, visit harriettubman200.com and harriettubmanhome.com.