No doubt, some people in Upstate New York are affected by depression, which can be attributed to the fact that this is one of the cloudiest locations in the country. Seasonal Affective Disorder (SAD) is a type of depression that changes with the seasons. SAD is assumed to be an imbalance of serotonin in the brain, triggered by a lack of sunlight. There are solutions to ease such depression. Physical and social activity, as well as having a creative outlet can be healthy coping strategies. 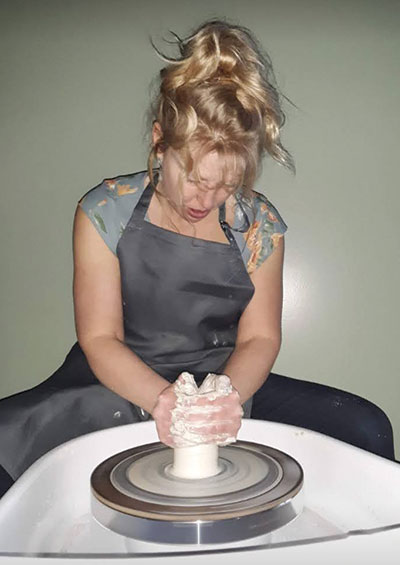 The therapeutic potential of making pottery to help curb the effects of depression is increasingly being recognized by the mental health community. Pottery engages the “effort-driven reward circuit,” which provides meaningful relief on a neurochemical level. Tactile gratification, focused contemplation, goal orientation and motor skills are some of the characteristics that pottery activities possess.

Located in the heart of the Finger Lakes is a hands-on pottery studio – The heART Studio. It offers a place for patrons to interact with their creative senses. The effectiveness of creating pottery was assessed to see how the experiential activity could be used as an enhancement tool for mental well-being. The goal of this study was to examine the impact on change in emotional states in persons during a single pottery session. The Positive Affect Negative Affect Scale (PANAS) developed by Tellegan and Watson(1988) was utilized to measure emotions. The PANAS questionnaire was completed pre and post session among a sample of 18 participants. It was found that positive emotions had an overall 23 percent increase, while negative emotions had an overall 39 percent decrease. There was a significant decrease in feelings of stress at 57 percent. Being upset dropped by 51 percent, followed by irritability 50 percent and anxiety at 46 percent. Feelings of fear and guilt both saw a decreased change of 38 percent. All positive emotions showed an increase. Feelings of inspiration showed significant change of 38 percent followed by pride at 33 percent. Alertness, activeness and enthusiasm increased by 33, 27, and 25 percent respectively.

In summary, findings demonstrate that engaging in the activity of pottery, is associated with short term emotion regulatory effects. This study has implications for counselors, treatment centers and the general population, as it provides a quantitative evaluation for pottery activity as a method of coping with stress and depression.

If you find yourself struggling with the winter blues, The heART studio offers classes and rental of studio time in a friendly community, where participants can exercise their creativity, working with clay and experiencing its therapeutic qualities. Literally getting “in touch with the earth” goes a long way toward healing.