Artist Terry Plater of Ithaca has traveled extensively in Europe and Africa, and less widely in the Caribbean and Asia.

“I’m naturally curious and I’m an experiential learner to a certain extent, so ‘being there in order to know’ works for me,” she said. “I’ve also been most interested in getting to know places that are as different from the United States as possible, with respect to politics, religion, and ethnicity and culture.”

But Plater’s current exhibition, “Harriet’s Legacy,” focuses a lot closer to home: her own family and locations in Upstate New York that were stops along the Underground Railroad.

“The idea for this show came together in an iterative fashion as I contemplated three things: the 400th anniversary of the arrival of enslaved Africans in the now United States; the release of the film ‘Harriet,’ which so richly conveyed the life, struggles, and triumphs of Harriet Tubman; and an ongoing project I have been undertaking, painting from old family photographs,” she said.

“I’m pretty sure in saying that I only have to go back three generations to find a family member, my great-grandmother, who would have been born into slavery during the time of the Underground Railroad,” Plater said. “So in the exhibit, my goal was to link Harriet Tubman and her generation to our generation in two ways: by looking at people and by looking at places.”

Plater’s parents were born in Washington, DC, when it was still segregated. Her father attended Howard University and became an architect, and her mother attended Miner Teacher’s College and Temple University, and taught at the elementary level. Plater and her sister were born and raised in Philadelphia.

Terry Plater said she has always drawn and painted, but she didn’t major in it because she, as a Catholic school graduate, was drawn toward careers that involved helping other people. “Art was more personal to me then and, while I never considered myself a dilettante or a ‘Sunday painter,’ it was a private activity for many years,” she said.

While in graduate school, Plater had an internship at the Ford Foundation, which she calls “singularly the best work experience I’ve had.” She was assigned to Middle East/North Africa programs, and Israel in particular.

“That year, the office focused on projects supporting internal education (bringing people together across religions and nationalities for conferences, for example) and cooperative peace projects, such as a village called Neve Shalom that welcomed people of all religions and ethnicities — Jews and Arabs, Muslims and Christians – equally,” she recalled.

Plater also was selected as a Kellogg Fellow, and worked with other Fellows on a project not related to their main line of work. “One of my projects brought 12 university presidents to Cornell — all of them had been Kellogg Fellows — to talk about tradition and change in higher education,” she said. “That (internship) was a wonderful opportunity.”

Since retiring from Cornell in 2011, Plater has been devoting all her time to art, both creating and teaching. “It makes all the difference in the world to be able to devote yourself to something fully,” she said. “Having uncompromised time allows you to develop your ideas as well as your ability to present those ideas.” 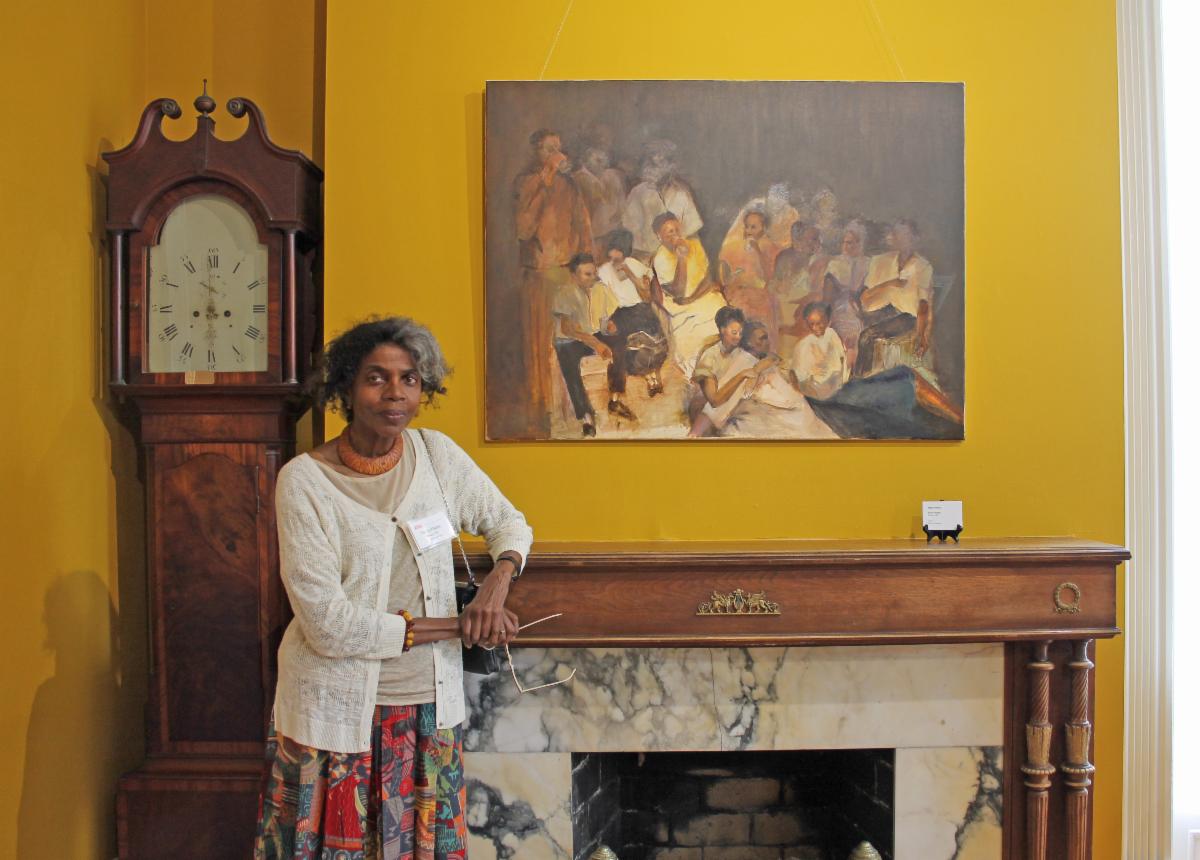 In Plater’s case, she is presenting a two-pronged exhibit that is located in two adjoining cultural institutions in Auburn: Schweinfurth Art Center and Cayuga Museum of History & Art. She is the first artist to be selected for the institutions’ joint Emerging Artist project.

Her proposal called for her paintings of imaginary landscapes that escaped slaves might have seen on their journey through Upstate New York to be displayed at the Schweinfurth, and portraits to be shown at the Cayuga Museum.

“I proposed to show the landscape paintings in Gallery Julius at Schweinfurth, benefitting from the more neutral ‘white box’ environment to best display abstracted paintings composed in a panoramic format to accentuate the notion of passing through as an act that is physical, emotional, and personal as well as imbued with cultural memory: at once dreamlike, intentionally imprecise, and evocative,” Plater said.

She chose figure and portrait paintings for Cayuga Museum to capitalize “on the opportunity to show and see private images based on family photos in an intimate setting, itself a former family home,” she said. The Cayuga Museum is located in the 1836 Greek Revival Willard-Case Mansion.

“In the beginning, my imagined landscapes were looking rather predictable and pedantic so I turned to reading, specifically ‘The Underground Railroad Records’ by William Still and edited by Quincy T. Mills, to help me feel what my enslaved forefathers and mothers experienced,” Plater said.

During her research, she described her project to Tompkins County Historian Carol Kammen. “As I was describing this challenge, she paused and looked at me with a twinkle in her eye, and said, ‘Would you like to know where some of the real activity took place?’” Plater said.

The two drove around Lansing, stopping at places where Kammen had documented evidence that Underground Railroad activity took place so Plater could take photographs. “One thing that I included from these photos was the idea of using a barn and a road as a motif and a metaphor for what the enslaved people were doing: Trying to find a way … to safety and often seeking some sort of shelter in a barn,” she said.

Many of the paintings in the Schweinfurth include a road, a barn, or both. The titles are drawn from “The Underground Railroad Records,” a book that captured first-hand accounts by formerly enslaved people who traveled that road to freedom. Plater turned to reading to help her feel what her enslaved forefathers and foremothers experienced.

“It soon became apparent that using those passages as titles would help the viewer better take in the paintings, for their beauty and also for the horrors they conceal,” she said. “I also hope to inspire people to read this and other books on the subject.”

All but two of the pieces in the Schweinfurth are watercolors, a medium Plater chose for practical reasons because of the shorter drying time. “But I also took advantage of the emotive qualities of watercolor to emphasize the contradictions between a beautiful landscape and the terrors those landscapes held for, in this case, freedom seekers during the time of the Underground Railroad,” she said.

Plater wishes to thank all those who made this exhibition possible: The Schweinfurth Art Center and the Cayuga Museum of History and Art, both in Auburn, and the Community Arts Partnership of Tompkins County.

There continues to be many books by local authors to include in this annual feature. It is encouraging to see “local author signings” at…