The following titles recall groups or individuals who have influenced and inspired us through their beliefs, writings, actions and achievements.
Human interaction with locations, and how physical surroundings impact their occupants’ lives, is explored. Take time to embrace the people and places found in these worthy offerings. 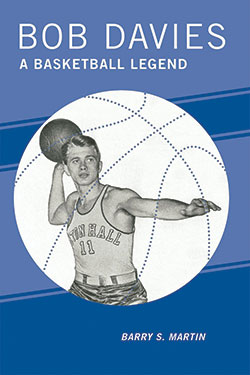 While Bob Davies (1920-1990) hailed from Harrisburg, Pennsylvania, the legendary basketball player’s career strongly impacted professional sports here in the Finger Lakes Region. Dubbed the “Harrisburg Houdini” for his sleight of hand movements like the behind-the-back-dribble, Davies is remembered for his stellar college and pro-basketball career.

This well-researched biography covers Davies’ Depression-era youth when he was a champion marble player. He became an All-American basketball player and then coach at Seton Hall University in New Jersey. In the Navy during World War II, he led the highly rated Armed Services basketball team. Afterwards, he signed with the Rochester Royals, today’s Sacramento Kings of the National Basketball Association. The Rochester Royals were described by NBA historian Leonard Koppett as “the most perfect team” of their era. Davies’ retired jersey number 11, worn when the Royals won the NBA championship in 1951, hangs today in the Sacramento Arena.

Davies’ exemplary life, both on and off the court, became the basis of a series of books for young readers, originally published between 1948 and 1966 about Chip Hilton, a fictional sports hero.

Barry Martin, a retired administrative law judge in California, watched Davies play for the Royals. His biography includes interviews with those who knew Davies personally and professionally. Many illustrations, chapter notes, a bibliography, and valuable index makes this a great resource for sports enthusiasts. 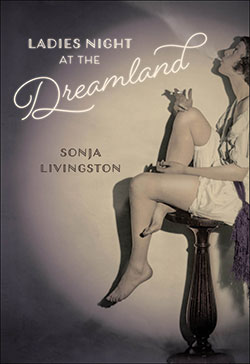 Ladies Night at the Dreamland

Stories of remarkable girls and women, some famous, others unfamiliar, even nameless, are the basis of this collection of well-crafted essays by Rochester native Sonja Livingston. She is also the author of Queen of the Fall and Ghostbread, which won an Association of Writers and Writing Programs (AWP) Prize for Nonfiction.

The Dreamland was a real dance hall on the south shore of Lake Ontario before it was destroyed by fire in 1923. In Livingston’s work it is a place “where nothing is truly lost,” and each of her chosen females take a turn in the author’s spotlight. The 20 essays are not strictly biographical; the author on occasion takes the liberty of weaving whimsical and personal incidents into the narrative.

Livingston switches deftly from different historical periods and locations. There is Maria Spelterini, the first woman to cross Niagara Falls by tightrope, and Audrey Munson, the artist’s model whose sculpted likeness is chiseled in stone on monuments in many locations of the country. Readers may remember the notorious Alphabet Murders in “Some Names and What They Mean,” an account of the murders of three girls in Rochester in the early 1970s. The author, whose childhood neighborhood and home life were not unlike those of the victims, imagines rescuing them.

The reader will savor meeting these historic female personalities, while the collection speaks to the larger issue of what it is like to be a woman. 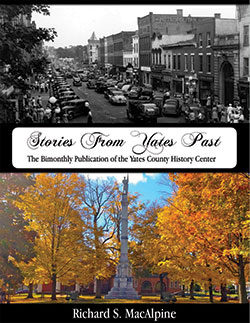 Stories From Yates Past

What makes Penn Yan’s old town clock so interesting? What health epidemic resulted in the opening of Soldiers & Sailors Hospital there?

Answers to these questions and much more about Yates County can be found in this collection of 40 stories. Richard MacAlpine, a retired American history teacher and local history author, chose selections from 120 articles he wrote for Yates Past, a publication of the Yates County History Center (yatespast.org). His research relied on the extensive resources available at the center, and he described these stories as “the most fun to research and write.”

Bite-sized illustrated articles on topics that date from the early 1800s to the 1980s are presented in roughly chronological order. They describe unique personalities and practices, and recall the local impact of national and international events. In Yates County’s Biggest Fourth of July, for example, the focus is the celebration held after the end of the First World War.

Some stories feature the author’s ancestors, including two farmers in the town of Starkey. Before the availability of refrigerated transport, bushels of apples had to dry in a large wood-burning evaporator. Unfortunately, using the dryer to prepare the fruit for shipment could result in serious fires, as it did in this case. These long-forgotten stories will entertain and intrigue readers. 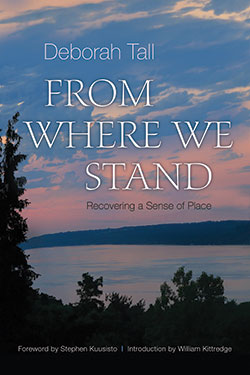 From Where We Stand: Recovering a Sense of Place

Deborah Tall (1951-2006) moved to Geneva in 1982 when she and her husband were hired to teach at Hobart and William Smith Colleges. She was professor of literature and writing for many years, and edited the literary journal Seneca Review. Tall wrote five collections of poetry and two other books. This title, first released in 1993, was reissued in 2016 with a new forward and introduction.

Before residing at the northern end of Seneca Lake, Tall was reared in suburbia, educated at a Midwestern university, and settled in a home on an island off of Ireland. The newcomer to the Finger Lakes steeped herself in the stories of her surroundings as she set out to make a true home. She tirelessly explored the past, especially the land’s original Native American occupants. The region’s links to early religious and social movements fired her inquisitive nature.

Tall’s observations still resonate as she explores the connections we have with places.  She investigates what philosophers, historians, and numerous experts express about the meaning of place.

Geneva does not fare well under Tall’s scrutiny; her family moved to Ithaca after 10 years. One might wonder how she would respond to the many changes in the region today, especially the impact of the burgeoning Finger Lakes wine industry. 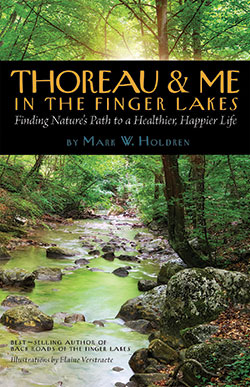 Thoreau & Me In The Finger Lakes: Finding Nature’s Path to a Healthier, Happier Life

While the author acknowledges that Henry David Thoreau (1817-1862) never wandered the Finger Lakes area, the beliefs of the 19th century writer reverberate so strongly with him that Holdren feels his presence in nature.

“We can never have enough nature,” wrote Thoreau in his book Walden, a reflection on simple living in natural surroundings. The New Englander believed that spending four hours daily in the open air was needed to insure his wellbeing, and studies now show the health benefits of the natural world. As Holdren points out, Thoreau was practicing an early form of shinrin-yoku or “forest bathing, a Japanese practice that encourages embracing the natural environment with all the human senses. There are many “official” shinrin-yoku forests in Japan, but Holdren says he has discovered his own sanctuaries in the Finger Lakes.

The longtime writer takes the reader (and Thoreau) along while hiking and kayaking places like the High Tor Wild Life Management Area east of Naples. His keen observation fuels rich descriptions of discoveries in the natural world. “The footpath is bordered by spring pussytoes. Their flower heads, like tufts of white hair, stand in stark contrast to the mottled brown blanket of dead leaves that carpet the forest floor.” Delicate drawings by Elaine Verstraete provide evocative images of the landscape. 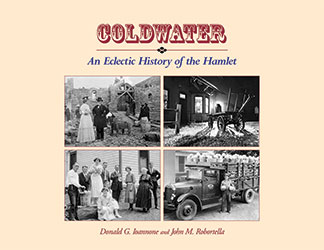 Coldwater: An Eclectic History  the Hamlet

It has been more than 50 years since a letter was postmarked Coldwater, NY. “Today, it is just a place name – an unincorporated hamlet within the towns of Gates and Chili,” write the authors in this “eclectic history” of Coldwater, a once energetic community in suburban Rochester.

The collaboration of Donald G. Ioannone, a former business owner in Coldwater, and John M. Robortella, a former editor of the Gates-Chili News and author of other local histories, creates this permanent record to ensure that Coldwater’s past will survive.

The hamlet’s name came from the readily available cold water used for steam locomotives. It became a regular stop on the New York Central Line with a railroad depot and post office. Since Gates lacked a traditional downtown, Coldwater (sometimes called Cold Water), filled the void.

This well-written survey is copiously illustrated. It documents Coldwater’s settlement, its role as a railroad hub, and the community’s churches, schools, businesses, organizations and sports activities. Here is where the famed Harris Seeds Company was founded. Even the Wegman family has links to the community of Coldwater. 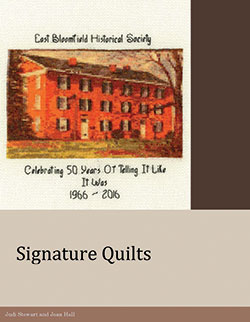 by Judi Stewart and Joan Hall

How does an organization celebrate when it reaches its 50-year milestone? The Town of East Bloomfield Historical Society (EBHS), founded in 1966, created a “signature quilt” that features the names and signatures of members and supporters.

Signature quilts have a long history and EBHS owns four others dating from the mid-19th century to 2006, each made using different methods of construction and style. The sale of squares for the 2016 anniversary quilt will provide for the care and restoration of the society’s collection of textiles.

Stewart and Hall write, “Signature quilts embody a moment in time when a group of individuals come together to create, in fabric, a time capsule for future generations to view and admire.” This collaboration of quilters Joan Hall and Judi Stewart, town historian and current EBHS president, documents the society’s five signature quilts and includes a valuable index of names that appear on the quilts.

Experienced sewers and quilters designed the newest quilt, a delightful and eclectic mix of images and names, including those of relatives of signers on its four other signature quilts. At its center is a cross-stitched likeness of the East Bloomfield Academy building where the Society is located. Local history buffs, quilters and genealogists among others will enjoy this fully-illustrated title.

After Nancy Maas has spent large amounts of time and energy perfecting a watercolor painting, she cuts it up. All that hard work down…