New fiction and nonfiction titles (and sometimes a blend of the two genres) capture human behaviors and achievements across our region’s history. Themes include the endurance needed to establish a settlement in the wilderness, the determination to wage war against an enemy, and the resolve to rise above marginalized status. Underlying themes of fortitude and survival are prevalent in this selection, with the courage to go on despite loss and the bravery to respond to a murderous attack. 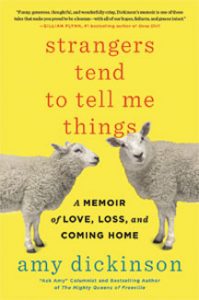 This book’s subtitle, “A Memoir of Love, Loss, and Coming Home,” succinctly summarizes the personal themes that fill its pages. Amy Dickinson is a syndicated advice columnist (Ask Amy) who also appears regularly on NPR’s comedy quiz program, Wait Wait Don’t Tell Me! She has lived in several large cities, but her roots are in the Finger Lakes. Her tale of returning to her hometown of Freeville in Tompkins County, begins with a simple map. “Amy’s World” shows the village’s size (population 520 and one stop sign) with her family’s assorted homes and local landmark buildings.

The reader is swept along by Dickinson’s candid accounts of her family’s unstable life followed by career success but a disappointing marriage. Due partly to her mother’s declining health, Dickinson is drawn home to Freeville along with the daughter she was raising on her own. The reader roots for true love to blossom when the middle-aged Dickinson describes becoming reacquainted with Bruno, a local builder, whom she had known growing up and who is himself the single father of four girls.

Her tales of challenging personal trials, like the blending of two families, are often punctuated with humor. Dickinson’s admission of her own uncertainties makes her experiences all the more believable and reassures the reader that perhaps you can go home again. 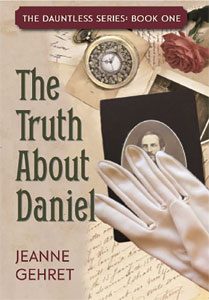 Susan B. Anthony, the renowned 19th century reformer, had several younger siblings, and this historical novel brings to life Daniel Read Anthony, one of her two brothers. The settings are varied, ranging from Edgartown, an old whaling port on Martha’s Vineyard in Massachusetts, to Saratoga Springs, New York and Leavenworth, Kansas. Each locale provides a unique backdrop for the story of Daniel Read “D.R.” Anthony and Annie Osborn, his future wife. The courtship between the Civil War Colonel and the much younger woman from a prominent family is largely conducted long distance and becomes a central theme of the story set in the mid-19th century. The plot reveals the earlier relevant events that shaped the lives of the central characters.

Jeanne Gehret’s varied career includes writing and publishing children’s literature, including a book on Susan B. Anthony. To this new adult title she has added fictional details to documented historical events. One chapter, entitled “Tea with Miss Anthony,” is an imagined meeting of the Anthony siblings, Susan and Daniel and the young Annie in Saratoga Springs, where the couple met.

The well-paced book will pique readers’ interest in critical historical events such as slavery and the settlement of the west. It pays careful attention to capturing the mores and manners of the time. 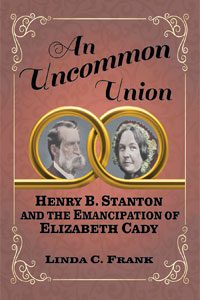 Linda Frank’s careful research delves into Elizabeth Cady’s and Henry Stanton’s deep involvement in 19th century reform movements. The author shows how significant accomplishments were achieved both individually and as a couple. It also explores the role played by political parties and their support or opposition to reform issues.

The author, a history professor and now the Cayuga County Historian, examines the Cady and Stanton families to show the considerable differences between the backgrounds and upbringing of Elizabeth and Henry. Following a brief courtship, they married in 1839 despite the objections of Elizabeth’s father, a wealthy lawyer, who was dubious of the prospects offered by Henry Stanton, who worked as an advocate to end slavery. Frank challenges the belief that Elizabeth’s “unhappy and oppressive home life” and marriage to a husband who was often absent, prompted her to take on the leadership role in the women’s suffrage movement. By contrast, a close analysis of the couple’s letters and other primary materials reveals Henry’s support and encouragement for Elizabeth’s pursuit of voting rights for women.

Amply illustrated, fully notated and indexed, this book offers fresh insight into how these individuals and their marital relationship shaped their activism. An epilogue details their later years following the Seneca Falls Convention of 1848. 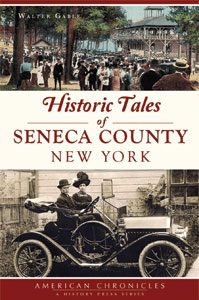 Walter Gable has served as the Seneca County Historian for the past fourteen years, following a career as a social studies teacher, recognized for excellence. These twenty articles, some of which the Seneca County native wrote for local newspapers, are unabridged and include source citations. Gable’s third title on Seneca County history provides bite-sized tales illuminating the county’s past, ranging from informative to baffling.

Those who have wondered about that large windmill on Routes 5 and 20, west of Seneca County, will find the answer in this well-illustrated and indexed book. What is today a visitor’s information center actually began in 1929 as a Dutch-style building attracting motorists to tourist cottages along the Cayuga-Seneca Canal. Originally, the complex included gas pumps, a tearoom, and souvenir businesses.

Diverse topics covered include an explanation of the building methods used in the construction of cobblestone structures together with a survey of many surviving examples in the county. The disappearance of a community called “Kingdom,” once located between the villages of Waterloo and Seneca Falls, is chronicled along with Ku Klux Klan activity of the 1920s. These assorted topics will enlighten history buffs, residents, visitors, and anyone curious to learn more about the rich past of the Finger Lakes region. 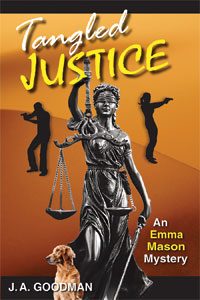 This inaugural Emma Mason mystery provides readers with a fresh, page-turning crime novel. The protagonist, a homicide detective on the Rochester Police force, and her partner Mitch Delaney are up against a psychopathic killer who stalks his victims in their city. Like a viewer of the television drama Columbo, the reader knows the murderer’s identity from the outset while the police remain stymied. What is unclear is what drives his depraved actions.

Creative writing classes taken later in life prompted the author, who lives in the Rochester area, to publish her first adult mystery novel. She neatly incorporates Rochester locales into the plot. The Lilac Festival in Highland Park becomes the ideal setting for Emma to meet Peter, a mysterious stranger who takes a romantic interest in the young detective.

The realistic descriptions of crime investigations, interrogations and police use of forensic science have a ring of authenticity. Characters are convincingly drawn. Lively banter between Emma and Mitch is believable and lightens the pressure the pair face to apprehend the murderer before he seeks vengeance again. Jean, Emma’s neighbor and best friend, provides just the right amount of sidekick camaraderie. 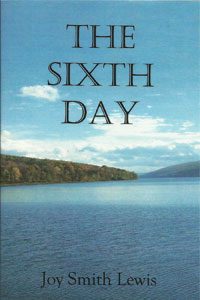 Hemlock Lake is the most westerly of the Finger Lakes. Today it supplies drinking water to Rochester and its shores are undeveloped. That was not always the case. The Sixth Day is loosely based on historical events that occurred around Hemlock Lake from 1780 to 1980. The author grew up and lived in the village of Hemlock for many years. She applies what she calls “bits and pieces of truth” to the book’s imagined lake and village of “Kanodea.” Each chapter is a complete short story concerned with one aspect of the fictional village’s development.

According to the Book of Genesis in the Bible, God created man on the sixth day. The author recounts the human story of Kanodea beginning with the survival of an early 19th century settler family to the arrival of an immigrant Laotian family in the late 20th century. The narrative style skillfully changes to suit the shifting time periods and to bring new families to life. As the story unfolds there are links to some previous characters and threads of earlier stories reach a conclusion in the last chapter.

Joy Lewis has been the Richmond Town Historian since 2014. While The Sixth Day is her first novel, she wrote two earlier nonfiction books based on the lives of her grandmothers. 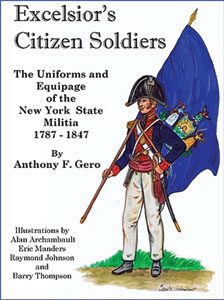 Has your family research uncovered an ancestor active in the Empire State’s volunteer militia (now the National Guard), during the Republic’s early years? This new source may help you visualize what he wore. The main objective of the book is to concentrate on the New York State Militia in the Jeffersonian period (ca. 1800 to 1820), documenting that period’s uniforms and equipage. A final chapter deals with the period up to 1847.

Following the Revolutionary War, the defense of the nation was placed in the hands of state militias and not a standing regular army. Some federal guidelines for the organization of state militia were passed in 1792. “Power struggles,” including the War of 1812, arose across the New York State and Canadian border from 1787 to 1839 involving the young American Republic, the British Empire, emerging Canadian interests, and various Native American tribes.

Anthony Gero, a retired social studies teacher from the Auburn area, has long been collecting, researching, writing, and publishing material on the militia and National Guard of New York State. This book is amply illustrated with full-color drawings, period prints, and photographs of actual uniforms when available. Appendixes of militia uniform regulations plus a bibliography will be helpful aids for researchers, historians, historical societies, curators and genealogists.