The lawn at the Sodus Bay Lighthouse Museum this morning became a gathering place for people from near and far who wanted to see a rare sunrise solar eclipse. It not only provided a great test run for the total solar eclipse coming our way on April 8, 2024 but also an enjoyable and unexpected social mixer for folks from all walks of life.

But there was a big caveat. 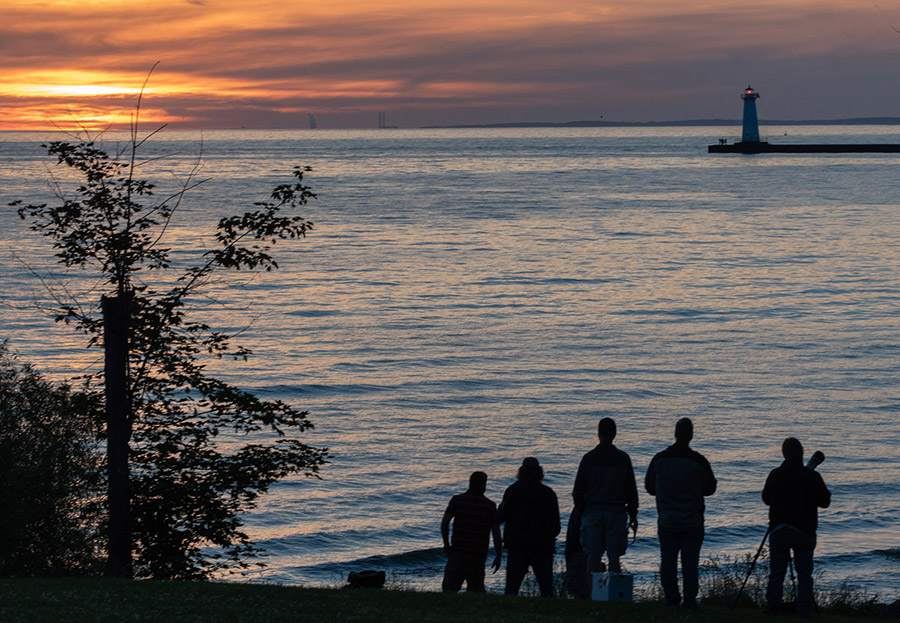 This is the scene shot with a regular camera as the sun is 3/4 covered by the moon.

To properly see or photograph a solar eclipse you need a solar filter in the form of eyeglasses or a camera lens filter. It’s how you see how much of the moon is blocking light from the sun. Without it, the partially covered sun seems only a bit dimmer and threatens your eyesight.

We got up at 4 a.m. and were on the way by 4:30 to arrive at the museum for a view of the sun rising at 5:30 a.m next to the Sodus Point lighthouse. Along with about 30 other people gathered at the shoreline, we watched as the sun broke the horizon and emerged from a thin cloud cover with the eclipse already near its maximum (78%) for our area.

People watching was almost as good as the eclipse. One fellow cut quite the medieval figure as he donned an ominous welder’s helmet worthy of a knight in dull armor. Another stuck a large box in front of his face to act like a pinhole camera (I think) to watch the eclipse being cast inside the box like a mini movie screen. Yet another used filtered glasses he made on a 3-D printer. A few had attached specialized solar filters attached to their cameras. 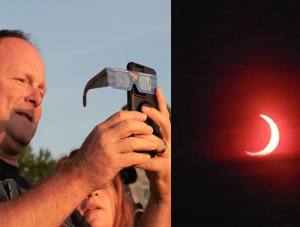 Mike used his eclipse glasses over his phone to get this picture.

Mike and Vicki from Dansville, held their solar sunglasses in front of their smart phones to get pictures. Others, including me, followed their example.

Friends of Mike and Vicki, Eric and Pam, came from St. Petersburg, Florida to see the eclipse. Pam said, “We arrived on Tuesday. Mike and Vicki, helped us scout the area, and we decided this was the best spot.”

John Kucko, the news anchor for WROC-TV known for his daily photo/video segment got his shots and then worked the crowd. A former Kodak digital software guru rigged up two “ancient” amateur Kodak Easyshare cameras to create a time lapse series that showed all the phases of the eclipse.

For some this was their first solar eclipse. A partial eclipse, even at ¾ totality, doesn’t really darken the scene. It’s cool but in a total solar eclipse. the moon completely blocks the sun and the world slips into a sudden midnight that eerily silences the crowd to a reverent awe.