Don’t mess with Wingnut. He’s a soon-to-be papa swan. But right now he’s teetering on the edge. He’s got a hair-trigger temper and is armed with a nasty beak and powerful, snapping wings.

But as you’ll see on the website, he and his buds are also incredibly beautiful.

Just don’t challenge him. Not right now. The defense hormones have been overdosing him all spring. He’s ready to take on one and all. He’s manic about protecting his mate and future offspring. Meanwhile, for three weeks, she has patiently sat on their nest and warmed the eggs as he patrolled a hundred yard perimeter. 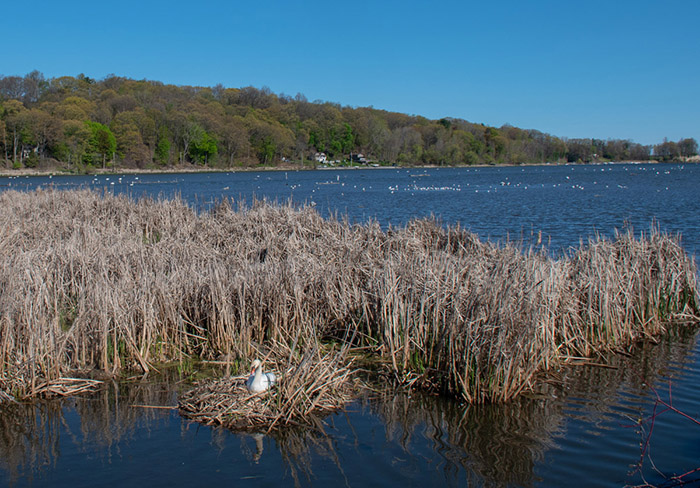 Nests are often next to the water in a large bed of cattails or reeds.

On this day, when a trespasser encroached, he hunkered down in his fight posture (wings half raised, neck and head lowered, body tilted forward) and power paddled toward one trespasser after another (once a whole flock). If they didn’t get the message, he raised up and began running on the water with loudly slapping feet to gain speed for a short burst of flight to ram and bite the intruder.

He’s a mute swan. New York’s biggest bird. And the animal that many think best epitomizes grace and elegance in the animal world. And, especially this time of year, especially with expectant parents,  ill-mannered behavior.

Mute swans typically lay their eggs in late April. The eggs hatch in late May or early June. In late April, I found five nests to keep an eye on. Four were built with and hidden by the reeds and cattails in large ponds, big bays, and small inlets connected to Lake Ontario, where so many of the regional population of mute swans live. One nest looked like a prototype of a Thor Heyerdahl, reed-constructed raft set adrift in the middle of a small inlet. Bordered by a road and marina parking lot, its nest was within casting range of the many nearby fishermen. 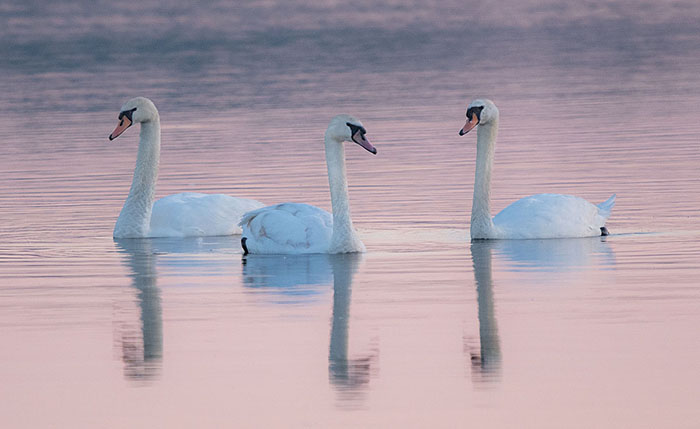 The soft, warm light before sunrise reveals graceful features of the swans.

But as of today, it was one of the two that were still active. I don’t know what happened to the other nests. Maybe they succumbed to poor parenting, bad weather, ravaging geese, or other predators, possibly human.

But Wingnut (my name for him) has aggressively, relentlessly, and tirelessly protected his mate and their nest in the southern end of a bay filled with dozens of geese and other mute swans. As hatching time draws nears, he’s become ever more assertive. Today, he extended his perimeter and continuously patrolled it, swimming back and forth on either side of the tiny peninsula that holds the nest.

His mate would occasionally leave the nest to forage. Mute swans feed in shallow waters, ducking their heads underwater to pull out weeds, often several pounds a day, sometimes depleting food sources and habitats for other animals.

Although not quite mute, they lack the annoying air horn blast of geese. Instead they hiss and snort, sometimes puffing a short muted, off-tune nasal bugle. Like a sneeze that couldn’t be suppressed.

In my outings I’ve been pursued by a goose or two but so far the swans have left me alone. Numerous reports of swan attacks suggest I’ve been lucky. When the babies appear, I’ll be sure to keep my distance.

02/08/2019 by Madis Senner Markowitz Florist, established in 1934, is the oldest florist in the Syracuse area. Jini Cerio purchased the business in 1987…