The Cayuga Lake Wine Trail’s second annual Bacon on the Lakein will be held from 10 a.m. to 5 p.m. on Saturday and Sunday, March 19 and 20. Sponsored by WQNY 103.7 in Ithaca, the event’s two-day tickets are good for one trip to each of the 16 member wineries for just $30. Transportation and accommodation packages are available, as well as discounted designated driver tickets.

Last March, the trail hogged the spotlight during the inaugural event. Each member winery prepared a bacon-featured food item and served it with a recommended wine pairing. Event-goers were encouraged to leave their ticket stubs in papier mache piggy banks at check-in and for every winery they visited, had a chance to win a gift basket full of wine and barbeque utensils.

The response was overwhelming. The wineries anticipated only a fair turnout – not unlike its other winter events – due to unpredictable weather and a smaller pool of visitors to the region. Bacon on the Lakein, however, sold out twice in advance, early enough to have more tickets printed to meet the demand. At nearly double the originally anticipated attendance, it truly was a bacon lovers’ paradise. One Facebook review said “Bacon on the Lakein 2015 event was amazing! Great job to all of the wineries that participated … food/wine pairings were innovative and absolutely delicious! Here’s to hoping for the same event in 2016…and beyond! #MMMMMBacon. #CLWTBACON2015.”

Bacon on the Lakein is just one of the many high points our wineries have enjoyed over the past few years. In 2014, Wine Enthusiast Magazine named New York State “Wine Region of the Year,” pointing to its more than 400 wineries, 37,000 acres of vineyard and 700 Gold medals; not to mention the countless wines achieving 90+ scores regularly and the hands-on research conducted by Cornell. As a result, the Finger Lakes has become one of the most-talked-about wine regions in the country.

Last summer, the Cayuga Lake Wine Trail planned an exclusive excursion for writers visiting the region for the Wine Bloggers Conference. From the nearly 300 bloggers who travelled here from near and far, a select 50 were treated to a private tasting from all 16 wineries, along with a scenic boat ride and an exquisite dinner prepared by three wine-trail chefs. Since their visit, the writers have showered the Finger Lakes region and its wine with high praise.

Founded in 1983, the Cayuga Lake Wine Trail was America’s first. Its original five members pioneered the wine-trail concept, which has been mimicked by numerous organized trails across the country. Many of the founding members of the trail are still involved, and work alongside their small teams in every aspect, ranging from harvest and production to sales and marketing. Their hands-on approach to running their wineries sets the stage for friendly service and handcrafted products, sealed with their personal approval.

A mobile app for the trail is scheduled to be launched this spring. Available on both Apple and Android, the app’s primary function will be way-finding. It has been designed with the visitor in mind – for those in the immediate area and those who are not. It’s intended to make planning a trip in advance, and navigating the trail upon arrival, a bit easier. The app will be fully integrated with Google Maps so that navigation is possible from anywhere in the world.

The application will have complete winery details with a photo of each one. Local transportation companies, accommodations and attractions will be listed and integrated into separate maps.

The Cayuga Lake Wine Trail is entirely navigable in just one weekend and definitely worth visiting. 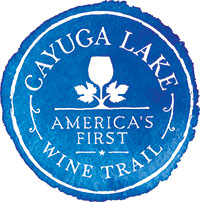 The trail recently rebranded, making the most dramatic changes to its visual identity since its inception. The design elements of the new logo include the “vine to wine” concept from the former logo, a weathered look and the words “America’s First” for authenticity. It’s in the shape of a seal to exemplify the quality of the product produced by some of the most skilled winemakers in the region.

The new look has been carried out throughout the trail’s promotional materials, tickets, website and social media, and more.
Last December, Cassandra Harrington was named the executive director of the Cayuga Lake Wine Trail. Her plans include expanding the group’s marketing efforts to include social media and websites such as Groupon and LivingSocial.
Download the FREE mobile app version of the magazine to see more information about events on the Cayuga Lake Wine Trail

11/03/2022 Originally published at GoFingerLakes.org The things that many people love about getting outdoors in the Finger Lakes Region – deep gorges, majestic waterfalls,…