West End Gallery in Corning is excited to announce the opening of a new “Spotlight Exhibit!” The exhibit features new artwork by 4 regional artists working in oils and acrylics, painting a variety of subjects including landscapes, birds, animals and figurative work.  This Exhibit allows them to showcase their talents in the “spotlight.” 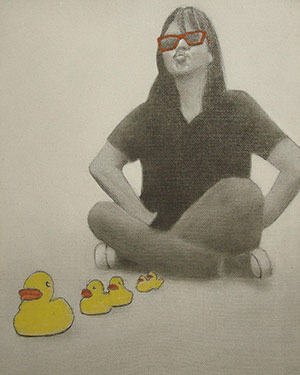 Edd Tokarz Harnas – “Dont You Have-Something To Do”

Edd Tokarz Harnas of Honolulu, HI – formerly of Corning.  In his artist’s statement, Harnas says, “I like history, a lot. Reading and wondering how life went on in supposedly simpler times. I was fascinated with the family photo albums, looking at these funky, low-tech, faded photos of distant and long gone relatives and their acquaintances.  Subsequently, I am drawn to any old photo, and what the story might be behind the image.  So I like to re-imagine the scene, the story, the person who might have looked out from those eyes with that special expression.  Fashions, etc, come and go, but the human condition gets passed on and we can relate.

On the technical side, I feel that I am better at drawing than painting.  The main image is rendered in pencil, using some of the techniques I’ve worked out for drawing on canvas. The painting part is to instill the color or tone that helps set the mood and style of the piece. From an inspiring photo that took seconds to take, I spend anywhere from a few hours to a couple of days re-interpreting it until I feel “we are there.”  Also, I’m inspired by wonderful work by so many talented artists like Dean Cromwell, Paco Pomet, Lou Ros, Eddy Stevens, and Dan Voinea come to mind.

The last part of this artistic adventure is up to the viewer.  What thoughts and memories do these pictures conjure up for you?”

Brian M. Hart of Corning.  Hart says, “This past spring, I assigned my design students a project to create a poster for a musician or group. The very best project may have been done by a virtual student that I have never met face to face. He created a fantastic poster for Kanye West and I Immediately thought of his song Better, Stronger, Faster from 2007. After allowing the song to bang around in my head, I thought that might be a great approach for a show. I would revisit some of my favorite subject matter and do it better and stronger and faster.

Back in the late seventies, Steve Austin, the Bionic Man, was made better stronger and faster. I thought there also would be ways to improve my fast compositions. I tried to make my color palette brighter and my brushwork faster and hopefully, more interesting in a “Golden Moment.” I increased the size of both the boatlift and sun reflection in “Uplifting” and tried to work more expressively with paint “The Lower Falls of Taughannock.” I thought I would heighten the drama of a favorite bridge by adding a twilight sky over Denison park.

A World War II painting, once a billboard and jigsaw puzzle, “The Last Embrace,” hangs in my house in our dining room. Over the years, things began to bother me with the painting, notably the figures and the perspective. I have included a few studies and a new version that I hope might be an improvement on the old theme. While I’m not sure if I am faster, it is my hope that these pieces are better and stronger than the pieces that were their inspiration.” 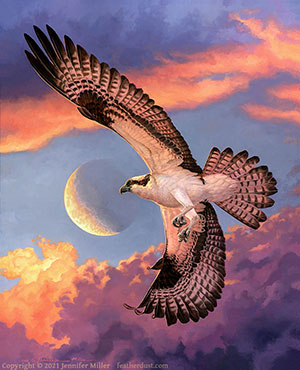 Jennifer Miller of Olean, New York.  In her artist’s statement, Miller says, “These paintings are a declaration of love and deep admiration for the subjects; it is easy to say that I love birds, but less easy to explain why. Their amazing feathers, voices, behaviors, shapes… the list would be very long, complex and rambling. I hope my paintings can give even the smallest glimpse of how endeared birds are to me. Some of my paintings drift into whimsy, as it’s hard not to feel dreamy about a beautiful bird.

Previously an artist of acrylics and digital mediums, in 2017 I was able to try oil painting for the first time, after learning that I could use oils without solvents or mediums. Oil painting and I have been great friends ever since, and I love exploring the beautiful luminosity and color that oils provide.” 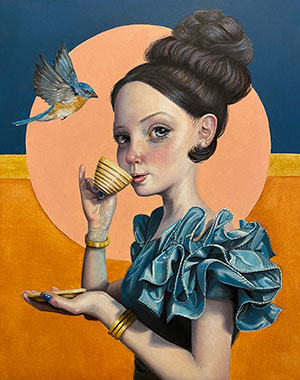 Gina Pfleegor of Corning.  In her artist statement, Pfleegor says, “In this series of paintings, I found myself drawn to a subject I know well; that balance of feeling strong yet feminine as a woman in our society today. Attempting to depict a sense of authenticity regarding what this can often feel like, I used symbolism to show that we can be both without sacrificing the other. Sensual can be strong, determined can be vulnerable, and sometimes warriors wear gowns into battle.”

Gina Pfleegor graduated from the State University of New York at Fredonia in 1998 with a Bachelors of Art in Graphic Design and a Bachelors of Science in Communications. In 2000, she pursued her Masters in Art Education at Elmira College while also starting a career as an illustrator. She began teaching art at Hammondsport High School shortly thereafter as well as illustrating material for dozens of magazines and various promotional materials. Her first illustrated children’s book, I Like Gum (written by Doreen Tango Hampton), was published in 2007 by Shenanigan Books. For the next several years she had several books published by McGraw Hill, the Brown Publishing Network, and many more.  Pfleegor states that “In 2013, I had an artistic change of heart and began a new journey as a photorealist painter working primarily in oils.  My current work has been accepted into juried shows throughout the region and has won several major awards.”  Her work for this exhibit is all figurative.  Pfleegor announced that her painting “Plot Twist,”  featured in the current exhibit, is among the top 35 pieces selected from artists from around the world for the publication, Beautiful Bizarre.

Opening Day for this exciting new exhibit will be celebrated on Friday, September 3rd from 2:00-7:00 p.m. Free and open to the public. The main exhibit is wheelchair accessible.