Home towns are a recurring theme in this selection of new books. There are memories of growing up in a small town, fighting in wars far from home, supporting women’s rights on the home front and older images of homes in one Finger Lakes township. To stimulate young readers’ imagination, there are even haunted homes. 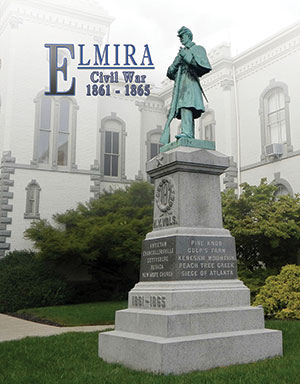 The role of the Southern Tier community of Elmira during America’s Civil War is the focus of this colorful and fully illustrated new book. Relying heavily on documentary evidence, it offers a well-written overview of the war, linking the local response to national tensions that led to the four-year conflict. Why Elmira was chosen as a mustering point and training center for 20,000 Union troops, and later a site for a prison for captured Confederates, is a significant part of the narrative.

The lives of residents in Chemung and surrounding counties were deeply impacted by Elmira’s war-time role. Of interest is how residents on the home front rallied behind the war effort and commemorated veterans after the war’s end. Four helpful appendixes offer data on Civil War organizations raised within Chemung County, a map of 1860 Elmira, sources for additional reading, and advertisements used in the text, which are reproduced for clarity.

Teresa M. Olszowy, a former U.S. Army Ordnance Captain and lifelong resident of Chemung County, graduated from Syracuse University and Central Michigan University. She is an amateur historian with a focus on military history, a board member of Friends of the Elmira Civil War Prison Camp and graduate of Leadership Chemung. This is her first book. 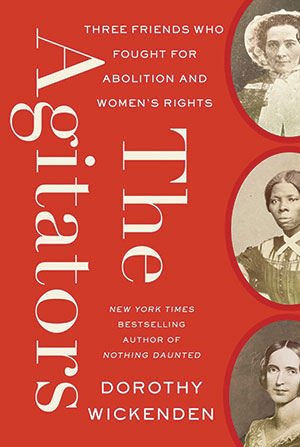 Three activist women whose lives were closely connected in 19th century Auburn, New York, are the subject of this shared biography. The history of the American abolitionist and women’s rights movements unfolds through the lives of Frances Seward, wife of William Henry Seward, Abraham Lincoln’s Secretary of State; Martha Coffin Wright, the younger sister of Lucretia Mott the abolitionist and activist; and Harriet Tubman, former slave and Underground Railroad leader. Events leading up to the Civil War and details of this altercation are prominently featured.

While Tubman is a well-known historic figure, Seward, a woman of privilege, has been eclipsed by her husband, a major political figure. She was, however, privately able to influence his views on major issues like emancipation. Wright, a middle-class Quaker mother of seven, helped organize both the Seneca Falls Convention in 1848 and anti-slavery conventions across New York.

What is intriguing is how the lives of the protagonists were interrelated during this tumultuous era. Seward and Wright had sons who went to war, and Tubman navigated behind enemy lines.

Extensive chapter notes and a thorough index make this a valuable contribution to the subject. Dorothy Wickenden, author of the acclaimed  book, Nothing Daunted, has been the executive editor of The New Yorker since 1996, and writes for the magazine. She hosts the weekly podcast, Politics and More. 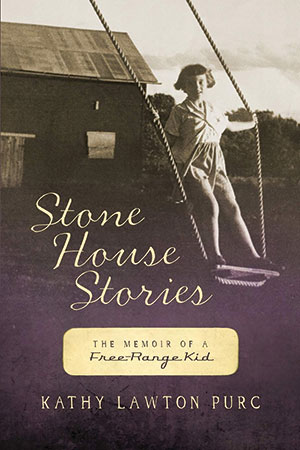 Stone House Stories: The Memoir of a Free-Range Kid

If the 1950s was the decade of your childhood, this memoir will feel familiar. Family life in a small town in the Finger Lakes Region was not unlike small towns elsewhere in mid-20th century America. The Lawtons lived in Scipio in Cayuga County on 13 acres of land with a stay-at-home mom and dad who combined factory work with farming. This well-crafted personal narrative is filled with relatable childhood memories expressed with candor, warmth and humor.

The reader is invited into the author’s world to meet her parents and older siblings Billy and Polly, along with her younger brother David, who was born with Down syndrome. The author’s descriptive anecdotes and black and white snapshots bring to life her family, friends, teachers and assorted relatives.

While quiet and introverted, the young Kathy Lawton had a lively imagination and tomboy nature, leading her to bravely explore her rural surroundings and enjoy visits to the big city of Auburn. She survived numerous scrapes and falls resulting from childhood adventures and developed the strength to confront unexpected dangers and predicaments that lay ahead.

Purc, a former human resources manager, has written poems, essays and short stories that have been published in five anthologies and local and regional publications. This is her first book. 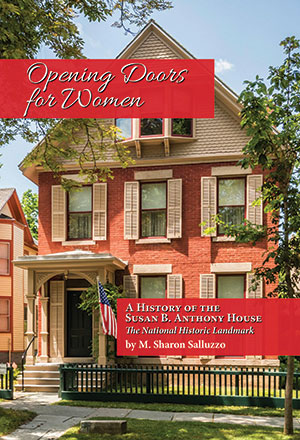 Opening Doors for Women: A History of The Susan B. Anthony House

Sit back and take an informative armchair tour of the historic home of an influential American. The brick house at 17 Madison Street in Rochester was the longtime residence of Susan B. Anthony and her sister Mary. Today it has become the National Susan B. Anthony Museum & House. During Anthony’s life, it also served as the base of operations for the New York State Suffrage Campaign in the 1890s and national headquarters for the National American Woman Suffrage Association while Anthony was president.

Historic black and white photographs document two earlier Anthony family homes as well as older views of the Rochester house now designated as a National Historic Landmark. A concise, well-written account interweaves the sisters’ occupancy with biographical details. Full-color images record restored rooms and highlight original family items on display. References include a family tree, timelines and a bibliography. This is bound to whet the reader’s appetite for an in-person visit to the house.

Sharon Salluzzo is active at many levels, from docent to trustee, at the National Susan B. Anthony Museum & House. She is a member of the Genesee Storytellers and a retired children’s librarian who remains involved with the Rochester Public Library. This is her first historical nonfiction book. 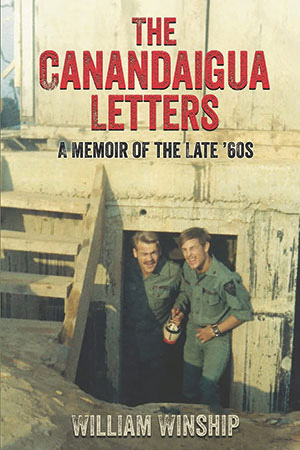 The Canandaigua Letters: A Memoir of the late ‘60s

Letters written 50 years ago by a young man to his family prompted this memoir of Bill Winship’s military service. When he dropped out of college in the late 1960s, the Canandaigua native enlisted in the Army. Once his training was complete, rather than heading to Vietnam, he was assigned to the Demilitarized Zone of Korea, because the U.S. government was concerned about increasing North Korean aggression. The circumstances of that situation are less well-known, but other events and attitudes will be familiar to those who came of age in the turbulent 1960s.

The narrative spans the author’s’ two-year stint in the Army and his subsequent return to college life. Beginning with Basic Training, these recollections detail the dangerous physical and mental challenges Winship faced. There are reflections on how military life diverged from the American counterculture movement, as well as anecdotal memories, sometimes humorous, recalling misadventures during weekend passes. The inclusion of images of Winship’s hometown, family, high school friends, Army buddies, Korean girlfriend, military settings and campus life offer a strong visual record.

Now a Seattle resident, Winship is a writer of plays and screenplays and directed the Emmy-nominated PBS documentary Pioneers in Aviation: The Race to the Moon. 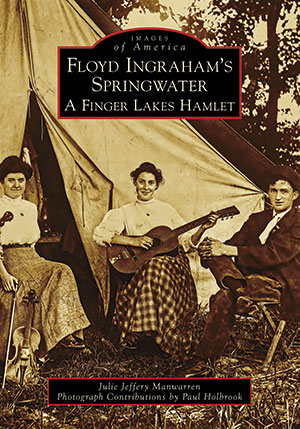 For the first 20 years of the 20th century, Floyd Ingraham, son of a farmer in the small agricultural community of Springwater, photographed people, structures, activities and landscapes in and around the Livingston County township. The amateur photographer often developed his images onto postcards, and a few were reproduced onto larger “cabinet cards” or photographs mounted on cardboard. Ingraham died prematurely, but boxes of his glass negatives survived and have been recently restored by Paul Holbrook, a collector and restorer of vintage negatives from Ohio.

This title, part of the Images of America series, publishes a collection of Ingraham’s photographs for the first time and presents an overview of the photographer’s life and his use of glass plate negatives. Accompanied by well-written descriptive identifications, the book is a valuable resource, especially for those who trace their roots to the Springwater area.

Ingraham’s lens captured individuals and families in his studio or familial settings at their homes in Springwater and neighboring communities. Views include century-old tree-lined streets and residences, some of which survive, and the four westernmost Finger Lakes: Conesus, Hemlock, Canadice and Honeoye.

Julie Jeffery Manwarren is an author, freelance writer and researcher based in northeast Pennsylvania who visited Springwater several times to become more familiar with Ingraham’s world. 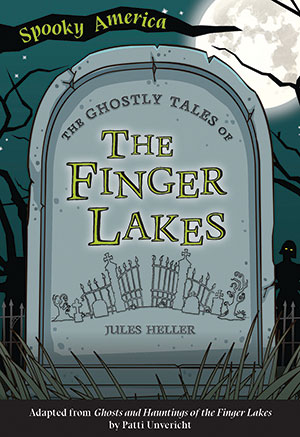 The Ghostly Tales of the Finger Lakes

Jules Heller
Adapted from Ghosts and Hauntings of the Finger Lakes by Patti Unvericht-Giglio
Arcadia Children’s Books, a division of Arcadia Publishing
arcadiapublishing.com
2021

This collection of ghostly tales will surely appeal to middle school readers. They may even inspire family road trips to visit the 18 featured haunts, using the handy map included in the book. Some of the Finger Lakes locations are today historic buildings adapted as museums and open to the public, while others may simply be a watery locale like Seneca Lake, where a monster is said to lurk.

While some locations may be familiar, the ghostly connection may be less well known. Take William Henry Seward’s Auburn home. Spirits have been seen in the house where the statesman survived a failed assassination. One is believed to be his friend, Harriet Tubman, helping other spirits to safety as she did in life through the Underground Railroad. At the Oliver House in Penn Yan, where generations of doctors practiced, full-blown apparitions have been seen. It is speculated the ghosts may be former patients or members of the Oliver family. In Victor at Valentown, an historic shopping mall, apparitions include that of a jealous suitor.

Writer Jules Heller of Syracuse was given Unvericht-Giglio’s adult book to adapt for younger readers. This variation is one of several he has written as part of the Spooky America series, which explores historic haunts across America.

Summer is the ideal time to go on a fictional journey or share a fantasy with a favorite child through a book. Sitting with…