In the spring of 2017, Rochester artist Chris Kolupski had just completed a large, complex project for a corporate client. He felt depleted and looked forward to unwinding by painting natural landscapes outdoors during a Utah and Colorado vacation with his wife Michele and their two children. “Hiking, painting and travel is as good as it gets for me as an artist,” he says.

The couple journeyed out west every couple of years, but this trip would present an unexpected turning point for Kolupski. In solitude and immersed in nature, he realized these excursions were his favorite painting experiences. His prolific art career had concentrated on illustration and portraiture, but he made the decision to return his main subject focus to landscapes when he returned home.

The focus on “return” rather than “change” was an important distinction, because Kolupski, now 52, was regularly painting outdoor nature scenes by age 16.

Kolupski credits his high school art teacher David DeClerk for making a significant impact on his early artistic evolution. The teacher was a watercolorist and architectural illustrator, which provided a window into the possibility of an art career for Kolupski.

DeClerk took his class on outdoor painting field trips and introduced his students to representational American painters and illustrators such as Winslow Homer, Norman Rockwell, and the Wyeth family – a style not in vogue in the ’80s. DeClerk served as a live model by hopping on a desk and posing like a Roman soldier with a broom as a spear.

During Kolupski’s annual Canadian vacations with his parents and three sisters, he would spend his time painting watercolor lake and forest scenes and going fishing. Out of high school, Kolupski taught painting classes at a frame shop, but his first steady art income was as a freelance architectural illustrator. This was before computer-generated design, so Kolupski drew freehand to scale in watercolor.

In 1995, after a five-year illustration position at a Rochester-based engineering and design firm, Kolupski moved to Brooklyn Heights, NY, to produce Biblical and historical illustrations for the Watchtower Bible and Tract Society of New York. It was a fruitful artistic period; he transitioned from watercolor to oil, shadowing a staff illustrator to learn the fine points of color mixing. Kolupski had always appreciated the wider range that the oil medium offered, but was held back by turpentine fumes. “I discovered hospital-grade, odorless paint thinner, and I was on my way,” he explains.

Kolupski also developed an interest in portraiture after drawing many costumed illustrations for Watchtower. He began to take classes at the renowned Art Students League of New York (ASL), studying portraiture and figure painting with Everett Raymond Kinstler, Deane Keller, and Nelson Shanks. Even after moving back to Rochester in 1998, Kolupski went back to take ASL classes and later at Shanks’ Philadelphia studio. Shanks, originally from Rochester, had painted countless luminaries including President Bill Clinton, Princess Diana, and Pope John Paul II.

Shanks taught Kolupski how to classify values using a 2-value Notan sketch as a reference for a painting. Sketching in simple black and white allows for the exploration of light and dark values without the distraction of color, texture, and finer details. “It was an epiphany and truly a gift,” says Kolupski.

The Notan technique also works well as a tool for plein air (outdoor) painting, where the natural light shifts rapidly and the artist works quickly to capture a scene.

The Romance of Art

In 2000, Kolupski was teaching a series of watercolor painting classes at the George Eastman House in Rochester when he met his future wife Michele Myers, one of his adult students. Feelings playfully clicked when Kolupski stole some of her fries during lunch. They married in 2001 and have two children: Violet was born in 2006 and Harrison in 2013.

Although he had stopped taking portraiture classes by 2004, Kolupski continued to hone his skills and slowly built a following. Word of mouth snowballed into a burgeoning business. “I painted literally hundreds of oil portraits,” he says. Kolupski also established Boxart Street Atelier in 2004, modeled after Shanks’ studio, where he taught a realist painting curriculum for a decade while continuing to paint portraits.

After Kolupski rededicated himself to landscape painting in 2017, he began to successfully compete in plein air competitions in the Finger Lakes and out west, collecting awards ranging from Honorable Mention to Best in Show. Kolupski did not abandon portraiture entirely – he spends roughly 20 percent of his time painting commissioned works.

But after more than 30 years of perfecting a precise, realistic style, Kolupski is purposely riding the edge between realism and impressionism. He now eschews highly rendered images in favor of brush marks that symbolize form and imply detail. “I’m excited by the beauty of strong mark making, the aesthetic value of paint itself, independent of what it represents,” says Kolupski. “When everything is clicking, my emotional response is relayed to the viewer, no matter what I’m painting.”

“His strong brush strokes and pallet knife marks make the canvas come to life,” says Fairport floral designer Lise Buonocore, one of Kolupski’s art students and a collector of his work. Buonocore takes Kolupski’s group classes, held outdoors at various scenic Rochester locations. Before the students paint on their own, Kolupski provides a live demo. “I so enjoy watching his plain canvas board turn into a stunning painting,” Buonocore says.

In 2019, artist Chris Manaseri invited Kolupski to a kick-off meeting of what became the founding members of Pittsford Fine Art (PFA): a collective of 11 artists with a gallery to showcase their work. The space in the village of Pittsford officially opened in January 2020, closing temporarily in March due to the pandemic. PFA is now back open with appropriate safety protocols in place.

Despite the quarantine, Kolupski has enjoyed good art sales and is busy teaching outdoors or online. He also started to paint portraits of some PFA member colleagues and plans to paint them all.

“Chris is thoughtful in everything he embraces,” says fellow artist Gil Jordan, a watercolorist. “This was apparent when I sat for one of his portraits. What I consider a suicide mission, he performed seemingly without effort.” Jordan appreciated Kolupski’s sensitive approach: explaining what his intention was with Jordan’s pose, every stroke of the brush, the color choices made, and areas he emphasized during the session.

Though Kolupski has a home studio, his favorite studio is anywhere outdoors. He’s especially drawn to rock formations sculpted by water and wind, or streams that carve their way down to form glens and waterfalls. “That’s why I love painting in the Finger Lakes, especially Naples,” he says. “One of these days I’ll hike up High Tor again and do a sketch for every waterfall, all the way up.”

For this artist, that project would be his heaven on Earth. 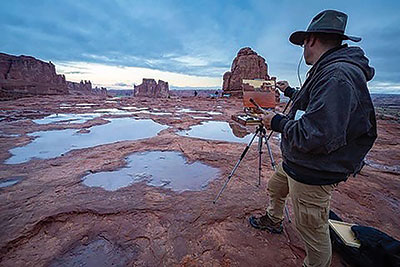 Kolupski starts with a hike, supplies in a backpack, cropping with his fingers to scope out possible compositions. “The whole time, I’m squinting to see interesting pattern of lights and darks,” he explains. When he finds his desired scene, he quickly sets up his portable easel. “With changing light, speed is everything. My easel is designed by Oak Hill Woodworking in Rush, to get me up and painting in three minutes or less.” Kolupski then creates a small marker sketch using 3 values to rehearse the painting and help solve problems. He switches to paint and premixes the major colors he sees, comparing color to color to get value relationships right. Once he has 12-15 colors mixed, he starts painting. After determining the horizon line and angles of major shapes, Kolupski works from dark to light, applying blocks of slightly thinned color using flat bristle brushes or a palette knife to fill the canvas. These color masses form the understructure of the painting. Once the canvas is covered, smaller forms and details are added using thicker paint. “The trick is in knowing when to stop adding more detail,” Kolupski says. The artist regularly posts time-lapse videos of his paintings from start to finish on Instagram and Facebook.

View and purchase Chris Kolupski’s work at chriskolupski.com or at pittsfordfineart.com. Contact the artist at ckolupski@gmail.com for information about his live virtual winter classes, offering step-by-step instructions and demos for portraiture and landscape subjects.