story and photos by Phillip Bonn

From Otisco Lake on the east to Conesus to the west, the Finger Lakes Region consists of 9,000 square miles of natural beauty. This glacier-carved landscape is packed full of scenic wonder, ranging from the long lakes to the waterfalls, and from the drumlins to the gorges.

Unless you’re a bird, it’s difficult to take in the fullness of the land and all it offers. We did the next best thing and used a drone to take some pictures. Changing the perspective makes everything look different, fresh and fascinating – even those landmarks that have been photographed to death. With a drone, every shot is unique. Here are some examples.

One of my favorite haunts is Carpenters Falls on the southwest side of Skaneateles Lake. Maybe you saw the article I wrote about the area, featured in this magazine in 2010, called “It’s a Butterflies-in-your-stomach Feeling.”? Wish I had a drone at the time because of the different vantage point that it would
have provided. 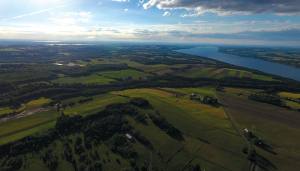 Taken on the southwest side of Skaneateles Lake, this image features Owasco and Cayuga lakes in the far distance. The rolling farmland, hedgerows and woodlots create interesting patterns on the land. 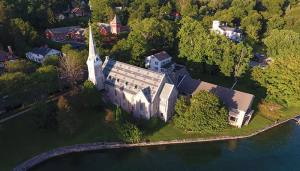 An aerial viewpoint can give you a new appreciation for architecture. Here is a seagull’s view of St. James Episcopal Church in Skaneateles. The cornerstone of this church was laid in 1873 and construction was completed in 1874. 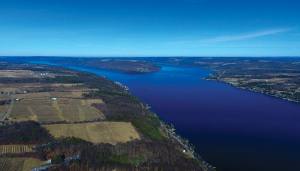 Swinging west is Keuka Lake with all the vineyards lining the hills. Its shape is unique – it’s the only lake that splits near the top to form the letter “Y. 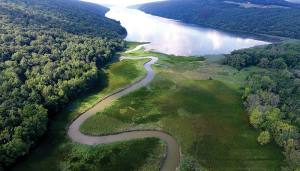 Even further west is Hemlock Lake. Fifty years ago, it was the home of the only breeding pair of bald eagles in the state. Today, there are 323 breeding pairs in New York. Kayakers wind their way along the inlet to the lake. 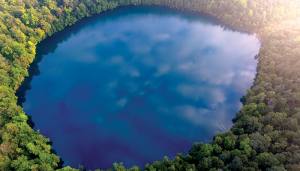 One of my favorite spots is Green Lakes State Park in Manlius, with its green/blue waters and forested hillsides. Viewing it from the air provides a completely new understanding of the geology.

Glacier-formed Round Lake is a small jewel set in an old-growth forest. This gem, a rare meromictic lake (with layers of water that do not mix), is nestled amongst the suburban sprawl in the eastern part of Onondaga County. It is a national natural historic landmark. 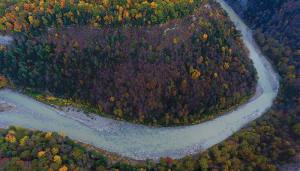 Another well-known natural landscape is Letchworth State Park. Covering 1,500 acres and containing nearly 50 waterfalls, it is truly awesome! Spectacular views of the 600-foot canyon walls and of the Genesee River can be seen from the many vantage points.

I’m sure that everyone reading this has a special place in their heart for one particular area in the region – an unpaved road winding through a forest, perhaps, or a waterfall cascading through a gorge. There is something for everyone in this region.

Summer is a season for camping and enjoying the outdoors, and many of us take advantage of New York’s state parks to do so….