Visitors to the Glenn H. Curtiss Museum near Hammondsport are greeted by a C-46 Commando twin-engine military aircraft parked alongside the museum’s entrance drive on NYS Route 54. The C-46, which is on loan from the National Air and Space Museum, was used by the United States Army Air Forces and Navy/Marine Corps to transport troops and military cargo during World War II. In a way, this airplane highlights the achievements of native son and hometown hero Glenn Curtiss, even though he didn’t live to see it. Curtiss died eight years before it was developed by the Curtiss-Wright Corporation, a consolidation of his Curtiss Aeroplane and Motor Company and the Wright Aeronautical Corporation, founded by the Wright brothers.

Glenn Hammond Curtiss was born in Hammondsport in 1878 and grew up in Pleasant Valley at the south end of Keuka Lake. His curiosity, mechanical ability and ambition were evident at a young age, and led him to pursue a career as an inventor and entrepreneur before he reached his mid-20s. His early obsession with speed inspired him to design and build racing bicycles and by 1902 Curtiss was manufacturing a line of motorcycles he named “Hercules.”

In 1907, his V8-powered motorcycle was officially clocked at 136.3 mph in Florida, earning him the title, “Fastest man on Earth.”

His first experience with aviation came when he modified a motorcycle engine to power the California Arrow, a lighter-than-air ship in what was to become the first successful American dirigible flight in 1904.

The first of many firsts

But these are just two examples of the many “firsts” accomplished by the enterprising young Curtiss. Even though the Wright brothers have been credited with flying the first heavier-than-air powered aircraft in 1903, their series of experimental flights at Kitty Hawk, North Carolina, were conducted in secret. Curtiss successfully piloted his aeroplane, the June Bug, a distance of nearly a mile across Pleasant Valley on July 4, 1908. It was the first preannounced public flight in America and earned him Pilot’s License #1.

Other Curtiss firsts include the following.

From wine to wings

The building that houses the Glenn H. Curtiss Museum was built as a wine storage warehouse by Gold Seal Winery in 1972. It was added onto 10 years later by the Taylor Wine Company. The museum moved into the building from its former location in the center of Hammondsport in 1992. Its two-story, clear-spanned interior height is ideal for the display of airplanes, many of which are suspended from the ceiling. There are dozens of exhibits that range from motorcycles, horseless carriages and antique boats to 22 historic aircraft that include full-scale reproductions of the first naval aeroplane and the famous June Bug, on loan from Mercury Aircraft, an airplane component manufacturer established in Hammondsport in 1920. Some of the building’s 57,000 square feet, including 38,000 square feet of display and exhibit area, have recently been renovated to increase and make better use of the existing space.

Last January, construction began to modify parts of the existing building in order to improve traffic and enlarge the museum’s store and restrooms. A second floor was built above the existing 100-seat theater and first floor office area, and an elevator and staircase were added. Although the museum remained open during renovations, there was no charge for admission – some of the exhibits were covered with plastic to protect them from construction dust and debris. Visitors were given the option to make a donation instead.

The renovation, which added 1,600 square feet of space on the second floor and affected 10,000 square feet altogether, was completed by Memorial Day weekend. The layout puts executive and staff offices on the new second floor, together with an aviation library, a kitchenette, additional restrooms, storage space, and a stunning board/conference room that commands a semicircular view of nearly the entire exhibit area below. It will be made available for community events as well. Elmira Structures Inc. was the general contractor for the project, which was paid for with foundation grants, member and private donations, and a community fundraiser that brought in $100,000 that was matched by the Mercury Aircraft Foundation. The new floor plan doubles the size of the museum store and improves the flow of visitor traffic throughout the building.

All in the family

The Glenn H. Curtiss Museum is branded as an aviation and local history museum with a predominant focus on transportation. It was founded in 1961 by Otto Kohl, who had been an aeronautical engineer at the Curtiss Aeroplane and Motor Company. Trafford Doherty had been the organization’s executive director since 2002 until his retirement last month. The job was a natural fit for Doherty, who has an aviation background and holds a commercial pilot’s license in both aircraft and glider aviation. His grandfather, William Doherty, learned to fly in 1911 as a student of Glenn Curtiss. His father, William Doherty, Jr., served as a director of the fledgling Curtiss Museum beginning in 1961. To keep things all in the family, Trafford’s wife Jean handled the museum’s membership duties and newsletter publication until her retirement last month as well.

Nebraska native Benjamin Johnson has taken the helm as the Curtiss Museum’s new executive director. Ben and his wife Adrienne recently relocated from Eugene, Oregon, where he served as the executive director of the Springfield Museum. With an undergraduate degree in History from Nebraska Wesleyan University and a master’s in U.S. Military History and Foreign Relations from the University of Nebraska, Johnson looks like another perfect fit for the institution. His game plan is to implement the board of trustees’ vision of increasing public awareness of the Curtiss name, and to move the project into the next phases of physical and marketing expansions. 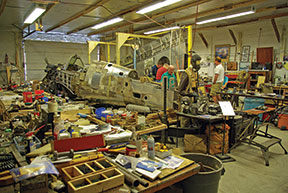 One of the most fascinating things to see at the Glenn H. Curtiss Museum is its Restoration Shop, located in a smaller secondary building behind the main exhibit hall. Staffed by a dedicated group of volunteer craftsmen, the shop provides many services to the museum. They range from building and repairing equipment and displays to restoring originals or building reproductions of aircraft and other vehicles. In contrast to the museum’s well-organized exhibit and display area, the Restoration Shop is a cluttered workplace with tools, machinery, and airplane parts scattered all around, but its volunteers know where everything is and what it’s used for.

One of those volunteers is Art Wilder, who is helping to rebuild and restore a Curtiss P-40 Warhawk. The U.S. Army Air Corps World War II single-engine fighter plane, a “Flying Tiger,” crashed in 1943 after a midair collision in Florida with another P-40. It was lost in the Everglades until 1986; the museum purchased it in 2011.

The Flying Tiger was delivered in pieces by truck, courtesy of Mercury Aircraft. Like completing a giant jigsaw puzzle, volunteers are meticulously rebuilding it for display using the wreckage from two other Flying Tigers – one of which being the other aircraft involved in the collision. They are using the original blueprints from Curtiss-Wright, and Wilder says that it will be a long-term reconstruction project. Some of the parts that were unrecoverable are being remanufactured by the Restoration Shop, perhaps a fitting tribute to the legacy of Hammondsport’s most famous native son.

story and photos by John Adamski