It was as if the Erie Canal of the 19th century era had come back to life. Lyons’ residents and visitors anxiously stood watch along the famed waterway’s banks waiting for a glimpse of the five canal boats dubbed Vote Tilla. Their week-long passage began on July 17 in Seneca Falls and ended in Rochester on July 21, stopping in canal communities along the way to celebrate the 100th anniversary of the work and cooperation that secured the vote for women. 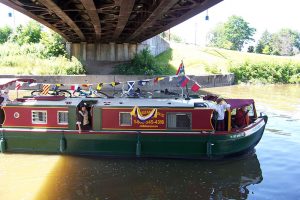 Vote Tilla  also marked   the 200th anniversary of the beginning of the Erie Canal’s construction in 1817. This multi-faceted event was organized by the National Susan B. Anthony Museum & House in Rochester in partnership with numerous organizations including the National Women’s Rights National Historical Park in Seneca Falls.

Many of the occupants of the boats were attired in period costumes of yesteryear to portray historic figures like Susan B. Anthony, Elizabeth Cady Stanton, Sojourner Truth, and Clara Barton, among others. 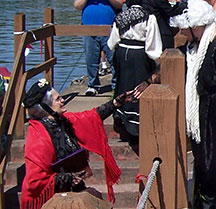 “I love it — sharing history and connecting with people,” said Shirley Scott of Rochester who portrayed Sojourner Truth, the abolitionist and champion of the women’s rights movement. Barbara Blaisdell, who depicted reformer Susan B. Anthony, explained that Anthony used many forms of transportation when she traveled on speaking engagements. “She loved the trains,” said Blaisdell who has been representing Anthony for the past 26 years.

After disembarking in Lyons the group received a warm welcome from members of local Girl Scout troops.   Then it was a short walk from where the boats docked behind the Fire House to the H.G. Hotchkiss Museum at 95 Water Street, locally known as the “Peppermint Museum.”  Tours of the museum were offered along with a concert in its courtyard by David Ruch, a performer whose repertoire includes historic canal stories and songs. Inside the museum’s “Lyons Room,” an area dedicated to local history, the visitors could see where canal boats once arrived with the oil-filled demijohns or wicker-wrapped glass bottles, that were then hoisted to the second story for the filtering process. 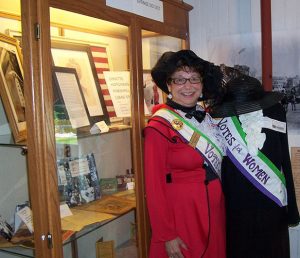 Pat Alena, known as “Peppermint Patty,” and President of the Lyons Heritage Society stands near an exhibit related to local women’s suffrage activities. 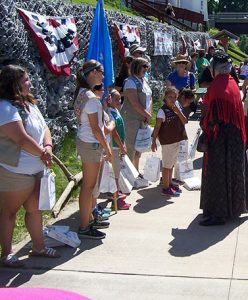 Local Girls Scouts were among those who turned out to welcome Susan B. Anthony (red shawl) and other historic reenactors and special guests to Lyons.

Currently, a new exhibit pays tribute to a local pioneer in the Women’s Suffrage Movement, Lisette Hotchkiss Parshall, whose father, H.G. Hotchkiss, established the peppermint oil business. “Lisette was one of Hiram I’s seven daughters and became a true suffragist who represented Lyons at conferences and conventions,” explained Pat Alena, President of the Lyons Heritage Society. A timeline also documents events in Lyons’ history related to the Women’s Rights Movement. In 1867 for example, both Susan B. Anthony and Elizabeth Cady Stanton spoke in Alloway, three miles south of Lyons, at Towar’s Hall then a men’s club. Alena also points out that Ann Hotchkiss, the last President of the Hotchkiss Company, had the distinction as a woman of presiding over a major international company in 1963.

“Meeting Susan B., Elizabeth, Alice and Frederick among other suffragists on the Vote Tilla stop   at the Peppermint Museum was thrilling and amazing,” said Alena.   “I loved their enthusiasm and their devotion to getting this important time in our history out to the public. It certainly helped to educate and make citizens aware of the Suffrage Movement and its impact on American Society.” 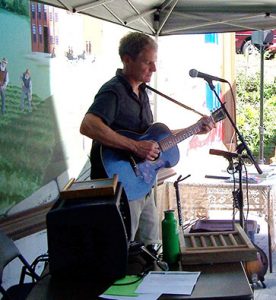 Performer David Ruch travels regionally and internationally to give concerts and workshops for schools, music festivals, historical societies, museums and community events each year. Not long before he was at the Hotchkiss Museum he appeared on TV’s CBS Sunday Morning (“All Hail the Erie Canal Erie” w http://www.cbsnews.com/news/all-hail-the-erie-canal-200th-anniversary/).

Vote Tilla’s stay in Lyons concluded after an informal lunch at the historic Ohmann Theater. Lyons town historian Carol Bailey was on hand to read a 1903 speech that Susan B Anthony presented to members of the National Grange Convention in Syracuse, NY. The youthful members of the Lyons Vocal Jazz Ensemble also performed a selection of patriotic and show music before the travelers continued on their canal journey and their next stop in Newark.