Come late spring, roadside wildflowers abound in the Finger Lakes. Few sights exceed the fields quilted with buttercups and mustard. But there is one, whose pointillistic pom-pom presence teases and seduces rather than overwhelms.

But before you pull over to explore this particular natural garden you might want to first ask “What’s the itch?” Because if you don’t, you might wake up in the middle of the night wishing you had.

Once again, I found out the hard way.

It started when I drove over a creek, and a swath of bright pinks and whites beckoned to me with that come hither look and blossomy wink that only flowers can get away with. So I parked the car and went hither to see what was calling out to me.

And there they were. Just below the bank and extending into a lush, fern-filled swale along the creek, the colorful flowers of Dame’s Rocket sparkled far into the woods. They’re often found in dense six to ten-foot patches right along the road.  But these filled a green sun-speckled copse with tall, slender, fully flowered stems undulating in the breeze. Lovely. Seductive. Irresistible. Like cookie sprinkles on a green-frosted Christmas cookie.

Without a thought and clad in shorts, I slung the camera bag slung over my shoulder and hopped the guard rail and traipsed down the bank where I made a beeline towards a large flower patch about fifty feet away. After only a few steps, I felt a sudden sting and intense itching on my shin. I quickly stepped back and received another sting and immediate itch, but on the back of my right leg. 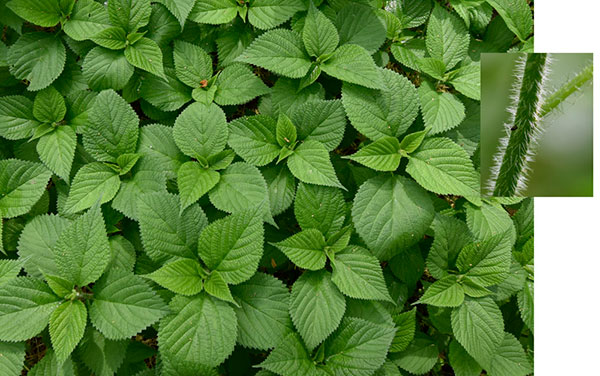 The annoyance of stinging nettle to hikers is offset by other helpful qualities, including medicinal efficacy, salad supplement from the young leaves if washed for several minutes to eliminate chemical irritants, and stems containing a linen like fiber capable of producing a similar cloth.

I looked down. Not bees, black flies nor mosquitoes, but the plant stinging nettle. It surrounded me. Just a small patch that I could step over. But then a bigger patch, and then several large swaths blocked my way. As I looked down to pick my way through them I found something worse. Poison ivy brushing my calf. My dreaded nemesis had launched a sneak attack.

I paused and spontaneously calculated the risk-reward scenario (not my strength when cookies or flowers are involved) of navigating safely through the lovely glade of flowers calling out as seductively as those Greek Sirens who had lured Ulysses onto the rocks. Stinging nettle, however, should only be an annoyance. It presents a bearable 4 to 6 on the itchy pain scale that disappears within five to fifteen minutes. An assessment that soon proved flawed because tiptoeing through the nettles in shorts resulted in being brushed and injected with formic acid by hundreds of those tiny bristles. The itches, though short lived, were intense and wide spread. Poison ivy, for me, is another matter. Not to be taken lightly.

Visually the copse was idyllic and irresistible. There was more than Dame’s Rocket. Large fern fronds sprawled, forget me nots quivered, and tangles of wild rose canes threatened – all under towering but tilting aging willows and sycamores. The clincher were the clusters of wild onions whose suprisingly pungent fragrance evoked, in the middle of this glade, childhood scenes of clanging, steamy kitchen preparations.

That fragrance tipped the scale. Risk-reward analysis be damned, I plowed on through nettles and poison ivy and skin-snagging rose canes to revel in this outburst of spring color and vibrance.

04/15/21 Check out the trailcam video! Video by Dennis Money According to the New York Department of Environmental Conservation, Eastern coyotes look similar to…