The revived fireman’s carnival at Pumpkin Hook opens today but I stopped by two days earlier and the entertainment had already started. On this past Tuesday the carnival crew was assembling the rides. The crew is a colorful group.

But first a word about the carnival. It’s a small event between a corn field and a firehouse in Farmington, just south of Macedon. It offers all the fair amenities: music, parades, food, rides, beer tent. But above all, it offers smallness. That smallness gives it terrific appeal. As does the ability to say you’ve been to Pumpkin Hook, which I’m sure you haven’t. The fair runs August 4 (6-11 p.m.), 5 (5-12 p.m.), and 6 (1-midnight).

I came across the setup crew while riding my bicycle through Pumpkin Hook. I almost didn’t stop. In full biking mode, I raced past the carnival field before I realized they were setting up for the first carnival in a few years. There could be a story there I thought; so I rode back to the field. 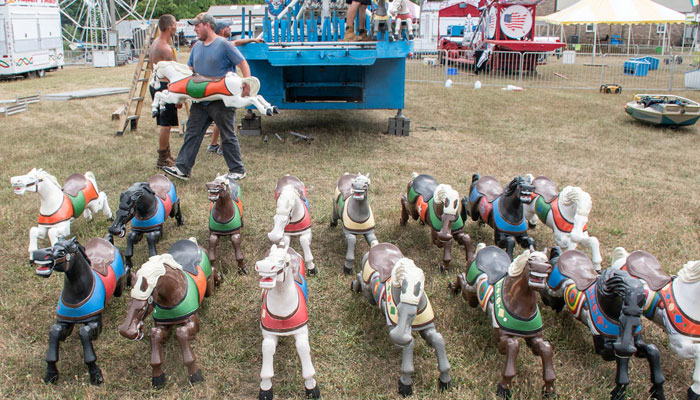 And there was a story. One that entwines many levels, including the Morleys, a multi-generational family who have owned and run this unusual business of operating small fairs since the 1950s. The full story will be told next summer in Life in the Finger Lakes magazine.

The story today is how these rides came together because memory combined with muscle to conquer matter. The matter consisted of lots of bolts, lots of pins. Quite a few rods and cables and brackets and braces. No shortage of screws. And don’t forget the carousel horses and all the other ride seats: most of them heavy. The connecting parts were hefty and strong, capable of enduring tremendous forces, including blows from massive hammers and yanks from massive wrenches wielded by strong men. They don’t snap together like Legos.

They require wrangling. Pushing, shoving, pulling, twisting, jerking, and occasionally jumping on. Cursing sometimes solidifies a reluctant connection. Besides cursing and lip-dangling cigarettes, the one thing most of these assemblers have in common is sinewy muscle. Some of it old, some of it young. Most of it (but not all) male. 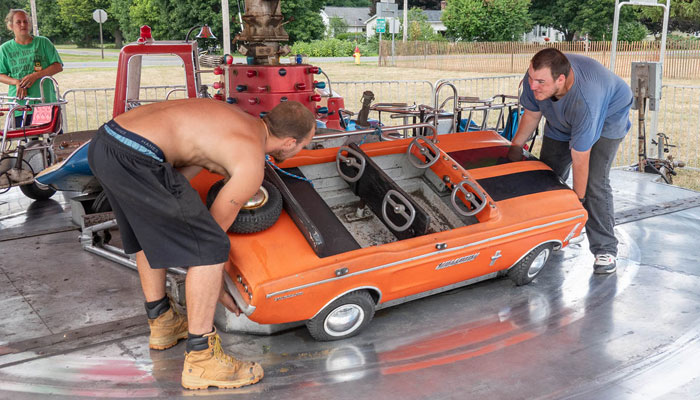 Gymnastic skills like climbing, contorting, and balancing are essential parts of the job. Being able to squeeze, squirm, and shimmy your body into tight spaces, like the eighteen inches under a ride platform, might go a long way to getting hired.

What is less common is carnival memory and meticulosity. The experienced old timers seem to brim with it; some have been doing this since their teens. They know every assembly step by heart and while they add muscle, more importantly, they add precision and watchful eyes. The best of them guide, note, and check every insertion, every connection, every attachment. I watched as they unloaded and assembled the carousel bit by bit.

So if you climb aboard a carousel horse at the Pumpkin Hook Carnival you’ll be riding on the hours of labor by Harry and Jim and Doobie (an assembly expert). You also might look a bit silly because it’s a kid’s ride with small horses.

I live an hour north of New York City. My cousin in Palmyra sends me your magazine, which I thoroughly enjoy. Soon after receiving…